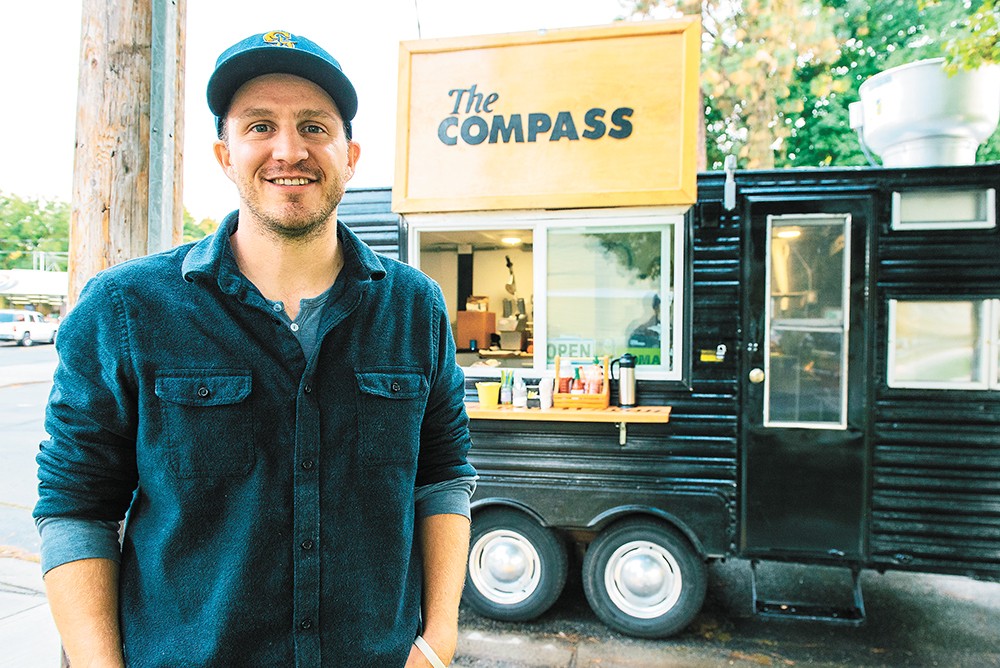 Erick Doxey
Owner Ross Carper hopes to also utilize his new Compass Breakfast Wagon to give back to the community.

Head up the hill before the snow flies,

or you might miss the newest local food truck to arrive onto the scene after it closes for a winter break.

"For quite a while I wanted to own a breakfast place," Carper says. "I love cooking breakfast, and worked in the food industry when I was in college and in my 20s. I'm kind of entrepreneurially inclined, and a couple years ago I started thinking more seriously about opening some sort of breakfast place."

To stand out from other local breakfast spots, Carper chose a signature item for the Compass menu: one-eyed jacks ($5-$6), that homestyle country classic consisting of a piece of buttered toast with a fried soft egg in the middle and a layer of melted cheese on top (many variations exist).

"The idea of using really good country loaf bread and adding cheese and toppings is an idea that I had several years ago," he explains. "It's a novelty item that everyone is familiar with, it has dozens of names — treasure island, bird in the nest, toad in the hole."

The one-eyed jacks showcase sourdough bread from Spokane's Common Crumb bakery, and eggs from a local farm that Carper sources through LINC Foods cooperative, which also provides the sausage for his spicy, peppery biscuits and gravy ($4.50). The truck's coffee is also roasted here, by Indaba and DOMA. Other items on the menu include avocado toast ($6.50), a biscuit sandwich ($5) and breakfast burrito ($4-$5).

Carper, a contributor for Spokane's version of Field & Compass magazine and the service engagement coordinator for his church, and his wife Autumn spent the better part of the past year retrofitting the camper into a mobile commercial kitchen. The project presented numerous challenges, partly why the business debuted so late in the season. Unforeseen costs to build out the trailer also prompted the couple to launch a modest Kickstarter campaign to try and recoup some of their time and money spent to launch the business. A little more than $3,300 had been pledged by the campaign's end on Oct. 21.

Another hope for the crowdsourcing campaign, Carper says, is to simply spread the word about the venture. To boost interest and get people talking, he and his friends created a parody 1980s rock music video for an original song, "U Got This," that's still featured on the truck's Kickstarter and Facebook pages.

"I take very seriously that you shouldn't take yourself too seriously, so that video was a way to bring some fun into it," he adds.

Beyond helping his customers get their days off to a satisfying start, Carper plans to use the business to give back to the community through what he calls the Breakfast Benevolence program.

"It's a traditional profit-motivated business, but also motivated by trying to make the neighborhood better," he explains. "Starting this has seemed a bit random to some of my friends, but the mission of it has lots of overlap with the other things I'm involved with: local nonprofits, service work through my church, and supporting and promoting local businesses through Field & Compass."

Each week, Carper picks a local nonprofit working to address food insecurity or other issues on a neighborhood level to receive a portion of the truck's proceeds.

Though he plans to keep the truck open as long as he can through the rest of the year, it's not suited for travel on snowy or icy roads. Carper expects he'll have to close up shop for the winter sometime later this month, but plans to reopen in spring after the snow melts. As a member of the Greater Spokane Food Truck Association, he also hopes to eventually bring the Compass Breakfast Wagon to community events. ♦