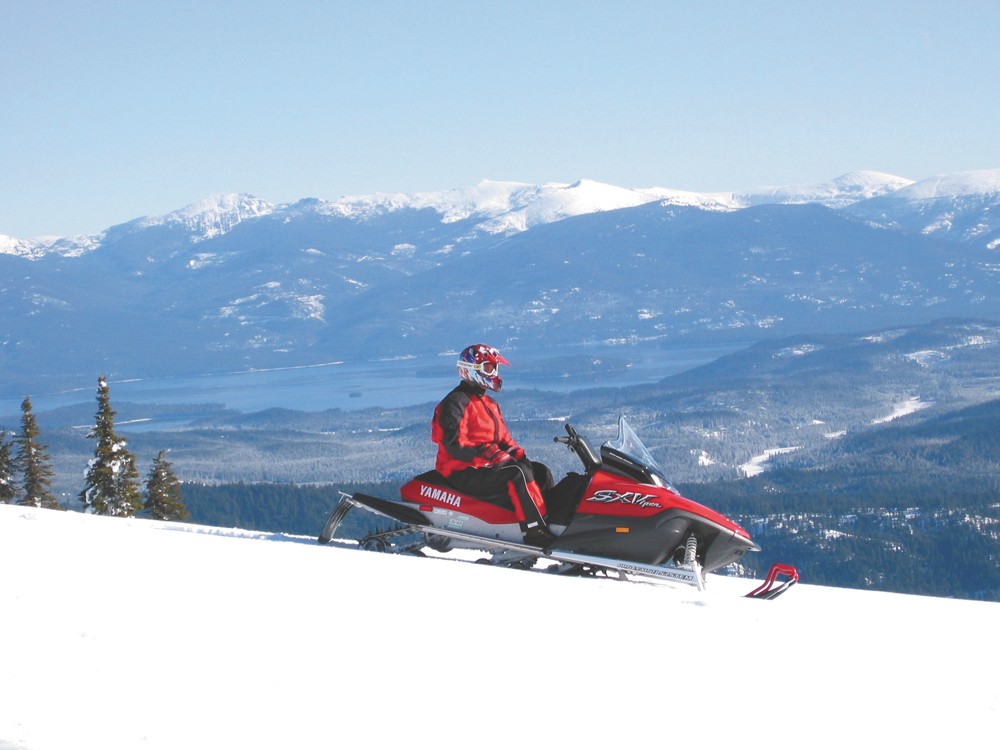 What happens in small lake communities when summer sizzles down and the ladies of the lake have hung up their bikinis? They merely wait for the snow and then hop on their snowmobiles, of course.

Jon Dodge, the program director for the Priest Lake Outfitters — operated by Cavanaugh’s resort — is doing his best to make people realize that there’s plenty of winter activities in the relative wild of North Idaho. He’s just opened the first guided snowmobile tours out of the Priest Lake region, which offers access to about 400 miles of groomed trails. The outfitters provide custom touring packages for clientele with the hopes of alluring new blood into the area.

Their main attraction is eight gleaming sleds, including the Polaris Pro RMK 600s and 800s. The outfitters will not only set you and your gang up for a great photo opportunity, but will teach the you how to throw the sled around like a pro. Their snowmobile clinics are taught by sponsored rider Scott Roads, who takes riders up into deep powder where they get a private lesson on how to plan routes, avoid avalanches, balance the sled — essentially master the beast that is a snowmobile. We’re talking about hanging off the side of the sled as you make a massive cut across a powder field and the precision to mob through a tight knit forest.

Dodge didn’t ride much before Roads spun him the idea for Priest Lake Outfitters and took him up for the first mock lesson a couple of years ago.

“I found them really awkward at first, like a unicycle, but Scott is really patient and got me into it. Once you do it, you find that it’s pretty unique,” Dodge says, smiling as he remembers that initial thrill.

Besides making you a master over the sled, the clinics will be heavily influenced by avalanche safety and rescue scenarios. Dodge explains that throughout his time as part of the search and rescue service in North Idaho he has seen many accidents that could have been avoided.

“Hikers, backcountry skiers, etc., seem to know about it, but snowmobile riders still seem uninformed about the risks,” he says.

As Dodge shows me around the cavernous shed where they keep the sleds, we talk idly about why he chose Priest for the site of his outfitters. He explains that as a tourist destination, Priest Lake is sometimes touted more for its resorts than its recreational opportunities.

“It has always been a dream of mine to bring a healthy recreation to the lake. I want to show people that getting out and finding beauty at Priest Lake is easy,” he says.

Dodge explains that running into wildlife is common on the sleds and that within the last two weeks they have seen numerous deer, a couple of moose and six elk.

It’s all part of the experience.