Brad Pitt takes on the financial crisis with Killing Them Softly 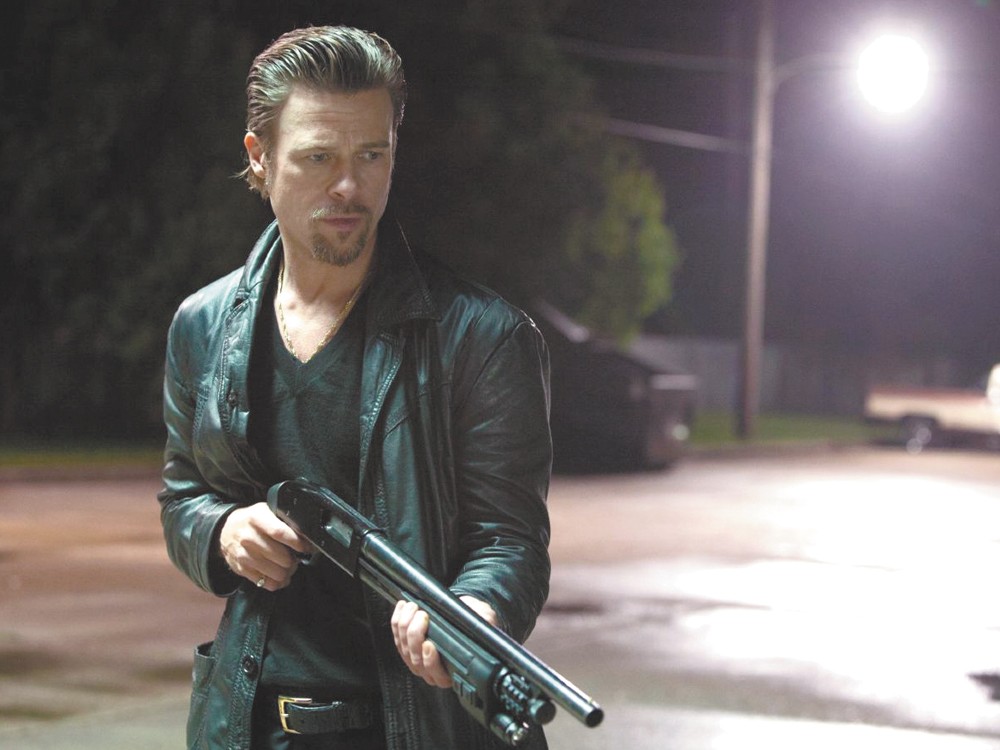 Have gun, will play bad guy.

You think it’s gonna be just another hit man action movie: Look, it’s Brad Pitt with slicked-back hair and an evil goatee and a shotgun! And it’s called Killing Them Softly, fer Pete’s sake, so maybe Brad’s gonna be some sort of philosophical hit man or something, but that’s as far as it’ll go, right?

But then you learn it’s from writer-director Andrew Dominik, the guy who made The Assassination of Jesse James by the Coward Robert Ford, which also sounded like it was gonna be kickass and bloody but instead turned out to be a cool, dreamy meditation on celebrity. Dominik pulls that trick again, turns a very American mythology of crime and violence in on itself and from that inversion yanks out a mirror with which to show us a startling reflection of America. The image shining darkly from Killing Them Softly is not very flattering, and some might be tempted to dismiss it, because Dominik is an outsider, a New Zealand-born Australian. Then again, his perspective isn’t clouded by visions of mom, baseball and apple pie, so could be he’s worth listening to.

To be sure, there’s plenty that’s plain funny or thrilling or clever or all three all at once in the skeleton upon which Dominik burnishes his mirror. Two of the dumbest armed robbers ever (Scoot McNairy and Ben Mendelsohn) manage to steal a ton of dough from a mob-protected poker game run by Markie (Ray Liotta), who has had his troubles with his mob bosses in the past. This heist, despite its success, involves multiple levels of idiocy and bad planning, and is itself a near parody of the sorts of crime thrillers that power the rush they provide from the intricacies and the ingenuity of their construction. And then Pitt’s Jackie, an enforcer the local mob brings in to deal with the miscreants, enters, with his smooth philosophy about the least unpleasant ways to take out assholes who desperately deserve it and a few well-aimed swipes at dumb armed robbers.

If Killing Them Softly were just a straight-up crime drama, it’d work on that basis alone.

Maybe the book, Cogan’s Trade, by respected noir novelist George V. Higgins, does work on that basis alone. It certainly cannot be about what Dominik’s version of it is about, because the book was published in 1974, and Higgins himself died in 1999, and Softly wraps its criminal enterprise up in a metaphor about the 2008 financial crash. Seriously. And what’s more, the metaphor works, brilliantly, even if it’s a tad heavy-handed.

This is a story about a small-scale local economy that has collapsed because the players have “lost confidence in the system” — who wants to engage in high-stakes poker if the games aren’t safe from the most obvious sorts of thieves? So conversations must be had between Jackie and his intermediary with the mob, a bland nameless bureaucrat (Richard Jenkins), about how confidence can be restored by a sufficiently widespread application of punishment meted out at the wrongdoers...not just the actual wrongdoers, but the ones perceived to have done wrong as well.

It’s all about perception, about those in charge being seen not tolerating the undermining of the system and being seen penalizing those who’ve done some undermining. The implication left unspoken — but nevertheless impossible to avoid — is that the same thing that Jackie is up to needed to be done way up on the supposedly legitimate national and international level. Metaphorically speaking, of course... though, metaphorically speaking, the helper Jackie brings in, washed-up assassin Mickey (James Gandolfini), is not up to the task and seems like a pretty unmistakable stand-in for others who cannot or will not do the hard work of fixing a broken system.

Jackie sees the metaphor, too: “This country is f---ed,” he notes. “There’s a plague coming.”

It’s a tough thing for America when sociopathic-if-philosophical professional killer is the one with his head screwed on best.