By Jake Thomas and Daniel Walters

"In my five years in the legislature, this was the most bipartisan and team-led effort that I've been involved in," Sen. Michael Baumgartner says.

Baumgartner, a Republican, led the effort to pass the bill in Senate, while Rep. Marcus Riccelli, a Democrat, led efforts in the house.

In the Senate, support was overwhelming, with a 45-4 vote. The hurdles came mostly in the House, Baumgartner says, where various Seattle-based Democrats attempted to add amendments that would have delayed the launch of the medical school or have made the bill more difficult to pass. Nevertheless, once it hit the floor, it passed by a similarly large 81-17 margin.

"Effectively what it does is it ends a 100-year-old monopoly on medical education [in the state of Washington," Baumgartner says.

The institution that previously had the monopoly shrugs off the bill. "The passage of this particular bill is not a surprise," says University of Washington spokesman Norm Arkans. "It's more or less anticipated."

The real fight will be over the funding, Arkans says. WSU wants $2.5 million to kick off the accreditation process, and also at least some of the $5.9 million in operations money that had been dedicated to medical education in Spokane.

Baumgartner suggests that since WSU has already used a lot of its own money to expand medical education in Spokane, UW could show some similar commitment to the city by doing the same.

"Simply making a request for funding in the legislature is not good enough," he says. (DANIEL WALTERS)

Rumours that an URBAN OUTFITTERS plans to set up shop in downtown Spokane were confirmed last week when Centennial Properties, the real estate division of the Cowles Company, announced that it was expanding a portion of River Park Square Mall on Main Avenue and Wall Street where the national retailer will open for business in fall of next year.

Demolition of the Saad Building, the future home of Urban Outfitters, on Main and Wall will begin early this summer to make way for a two-story 10,000-square-foot building that will serve as the retailer's newest location, which will be the only one in Eastern Washington. A new sidewalk will be installed on the east side of the building in addition to a connection to the downtown skywalk system.

Getting to this point required careful negotiations with Urban Outfitters, which were led by Downtown Spokane Partnership, and sources were mum about the identity of the company until it was officially announced. As part of the deal, Centennial Properties will request that the city relinquish 17 feet of the public-right-of-way on Wall, for which the company will pay the full assessed value.

The Spokane Transit Authority is strongly considering using that stretch of Wall for its planned Central City Line. The transit agency also reached an agreement with Centennial Properties that ensures that the project will be compatible with future bus service. (JAKE THOMAS) 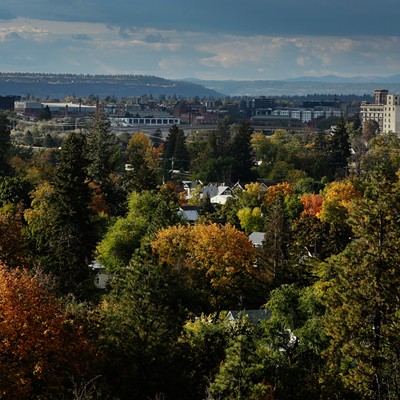