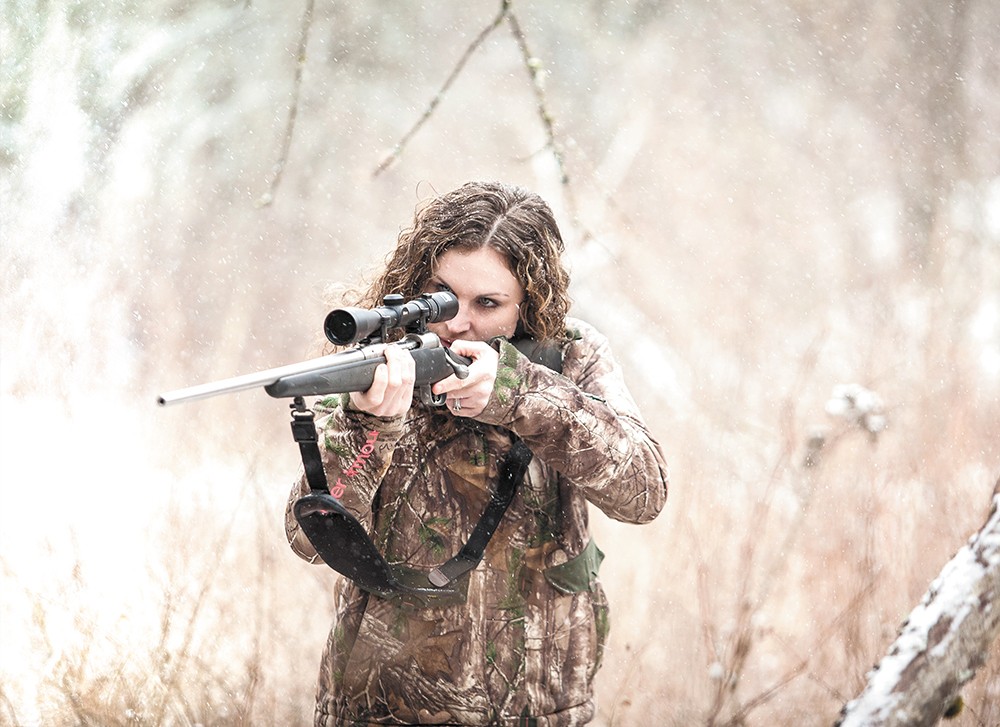 Amanda Lowrey bends at the waist, and takes her next steps carefully as she watches a herd of red sheep grazing lazily in the distance. Her face is calm but stern under the brim of her cap, earrings dancing as she moves, eyes focused on her prey. Slow and steady, she drops to her knee, raises her rifle and peers down the scope.

"I'm gonna take the shot," she whispers to two onlookers, who peer at the animals through binoculars.

Lowrey pauses, pulls the trigger and braces herself for the gun to kick back into her shoulder.

In the distance, the sheep drops in an instant. The echo of her gun sends the herd scattering. "Hell of a shot, young lady!" one of her companions, the host of Extreme Huntress, calls out as Lowrey jumps up and down, her hat flying off her head.

Lowrey, a 25-year-old Sandpoint native, remembers tagging along behind her father on a hunt when she was 5, watching him kill a deer and knowing that one day she would take up the sport. She got her hunting license when she was just 12. Ever since, she's been shooting mountain lions, black bears, elk, deer, wild turkeys — anything she can feed her family with. 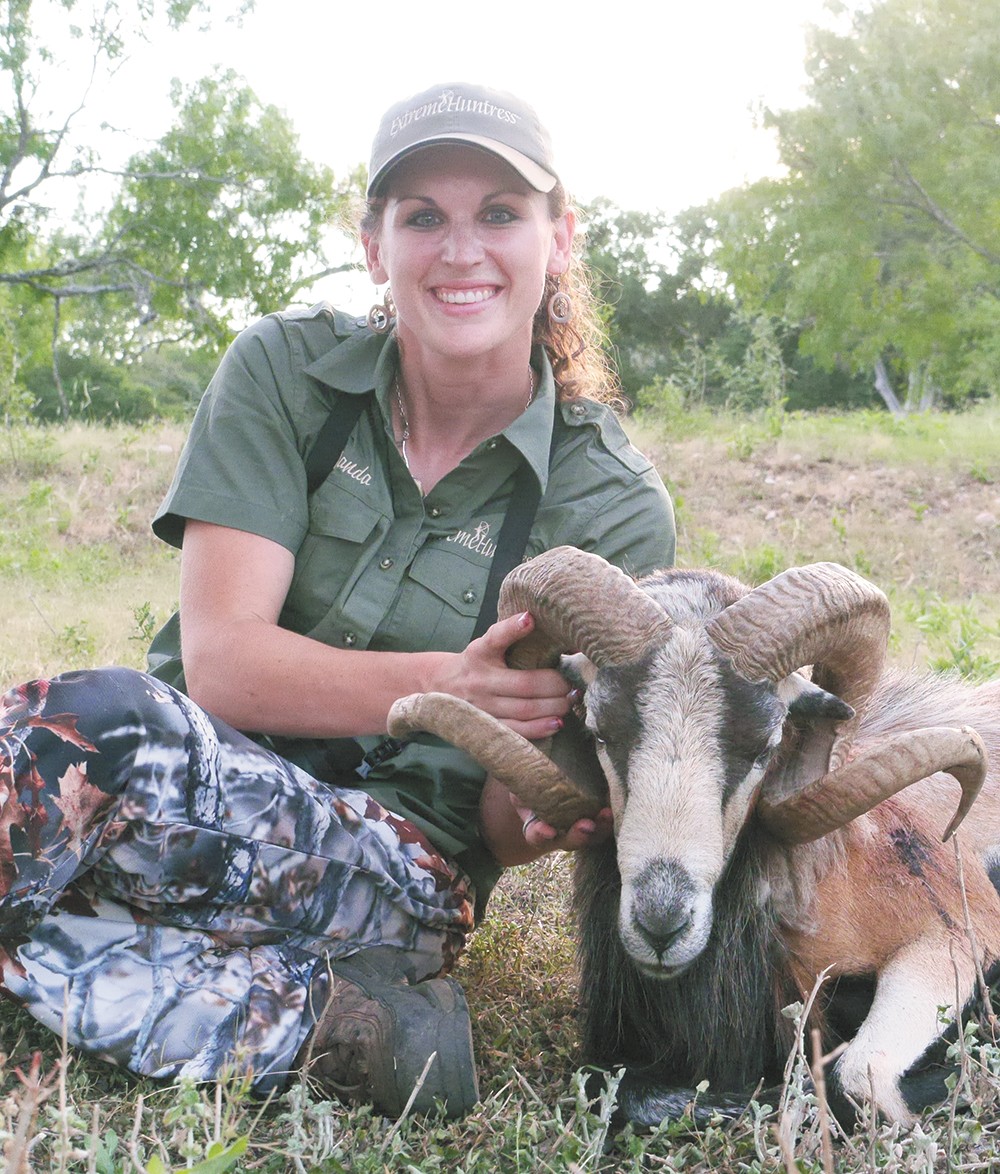 Lowrey with a corsican ram she took down in Texas this summer.

"We were raised that hunting was a way to put food on the table, and that's why we started doing it," she says, "Not just because we love it, but because it's a necessity."

Today, as a mother of two, she'll venture miles into the Idaho wilderness to hunt her own food — sometimes on horseback, sometimes with a bow and arrow. She says right now her freezer is packed with mule deer, whitetail and wild turkey, cut into steaks and made into sausages by her own hands.

In the past year, Lowrey has discovered her perspective on hunting to feed her family — not to mention the fact that she's a female hunter — is rare. She's part of a slowly growing population of Americans who hunt, which increased nationwide by 9 percent from 2006 to 2011, according to a survey by the U.S. Fish and Wildlife Service.

But it wasn't just being a female hunter that recently propelled her to the top four of a nationwide competition and online series called Extreme Huntress.

As a part of the competition, she was flown to Texas this past summer to test her skills. Lowrey knows her scores were toward the top of the ranks, but to win Extreme Huntress, she'll have to rake in a hefty number of online votes and gain high marks from judges.

Lowrey, who works from home for a camouflage design company, says part of her reason for wanting to be an Extreme Huntress was its mission: to engage females in hunting. She watched her mother hunt as a child and hopes her own daughters will follow in her footsteps.

She says she thinks she might have had an edge on her Extreme Huntress competitors because she's from Idaho and was raised hunting.

"I think I have a lot better survival skills because of where I live. I do probably the most do-it-yourself hunting," she says. "My dad, he just taught me how to do a lot of different things, take care of my own animals and pack my own stuff."

Lowrey likes to hunt by herself, which means if she makes a kill, she'll have to heft it back home by herself.

"I carry a pack with me with everything I'm going to need: knives, first aid, rope," she says. That way, if she shoots something like a deer she can "dress it out, skin it, quarter it, debone it. And start packing it out on my back."

She laughs now as she tells a story of when she was out hunting with her husband at eight-and-a-half months pregnant, and she shot her first bear.

"It was a really horrible idea, but now it's a fun story and we had a good laugh," she says, noting that they had to haul the black bear up a steep hillside afterward. "That particular one was only about 200 or 225 pounds, so it was on the smaller side."

She loves to hunt, obviously — and she says by doing it, she's in control of what she's feeding her family.

"A lot of people who don't hunt think we're just a bunch of buck-toothed hillbillies. Personally, I like knowing where my food comes from. At the store these days, you don't even know what's in your food," she says. "I like knowing that my food isn't filled with a bunch of junk. When you go out and work really hard and you're able to put food on the table for your family, it's very rewarding." ♦

Vote for Amanda Lowrey in the 2014 Extreme Huntress competition through Jan. 1 at extremehuntress.com.