Emma Stone and Steve Carell go head-to-head in Battle of the Sexes, an urgent, entertaining piece of sports history 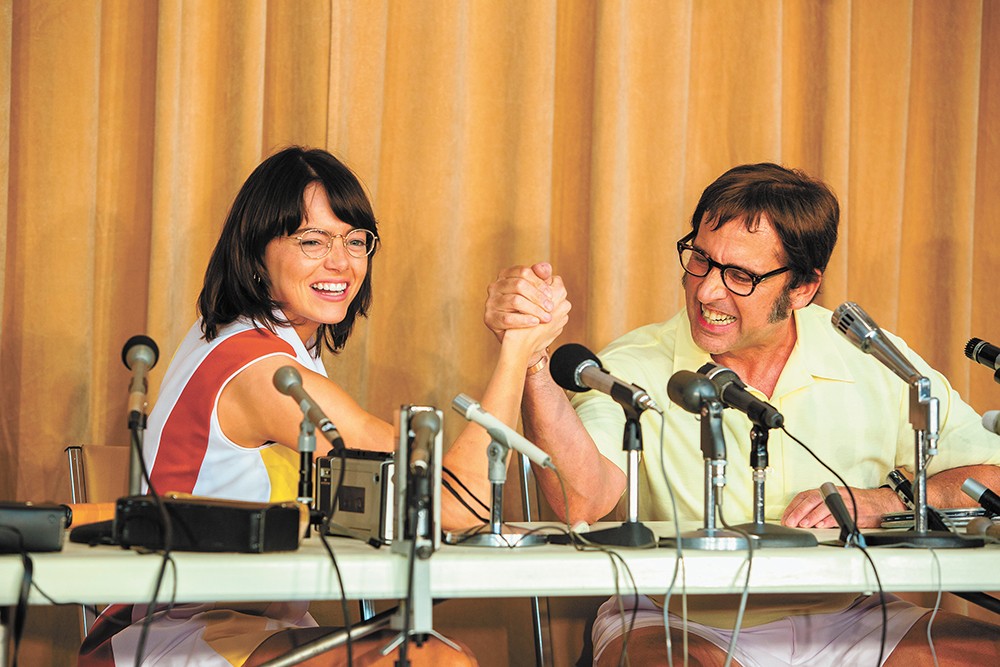 Thankfully, Battle of the Sexes is about a historic tennis match, not arm-wrestling showdown.

There's that saying: Two steps forward, one step back.

With feminism, it's more like half a baby step forward, a dozen steps back.

That's how it's possible that the 1973 Battle of the Sexes tennis match, meant to settle the question of whether female athletes were the equals of their male counterparts, did no such thing. Does anyone who was too young (or not yet alive at the time) to have watched even know about it? The match was an enormous cultural event that transcended sports. And yet it seems to have been all but forgotten in the popular consciousness. Certainly the "question" of women's athletic prowess continues to be posed, most recently in the "debate" over whether Serena Williams is the best tennis player ever or merely the best female tennis player.

So as usual, there's a necessity to a movie like Battle of the Sexes, an urgency to be seen, that goes beyond its sheer entertainment value, which is also enormous. Somehow, the directing team of Jonathan Dayton and Valerie Faris (Little Miss Sunshine) has captured the amusement value of retro kitsch without their film actually being kitschy. Somehow, they've made a film that quietly debunks the spurious notion that feminism can't be fun by itself being fun, full of cheery bashes at outrageous sexism and an aura of sporting (in all senses of the word) can-do spirit.

"I'm gonna put the 'show' back in chauvinism," the larger-than-life Bobby Riggs (Steve Carell) — 55 years old and a former champion — announces at a televised press conference once Billie Jean King (Emma Stone) — the 29-year-old, No. 1-ranked woman in the world — has finally accepted his challenge to play him in an exhibition match. Everyone laughs, including King. But while he may be entertaining, he's an entertaining asshole, and entirely representative of attitudes she has been battling for years. She is under no illusions about how vital it is to win this match.

But that's at the end of the film. The movie opens with King — Stone is wonderful in the role, all quiet determination and ambition — pulling out of the tennis federation run by Jack Kramer (Bill Pullman) over his refusal to pay the women the same prize money the men receive: the women, after all, sell as many tickets as the men do. The likes of Kramer, a respected authority figure, are the real problems, the most insidious misogynists, not a clown like Riggs. (Carell is an absolute hoot in the role. Ghastly, but a hoot nevertheless.) King doesn't just pull out of Kramer's organization: She leads other women players in boycotting his tournaments and setting up their own league.

Screenwriter Simon Beaufoy finds a lot of sly humor in how the women's tournament grows and succeeds, stuff that wouldn't have caused anyone at the time to bat an eye but seems amusingly ironic today, such as the fact that it's tobacco company Philip Morris sponsoring what is billed as the "Virginia Slims Tour." And our eye today cannot help but pick out appalling condescension and casual abuse that was misogyny passing unnoticed in 1973, as how Battle of the Sexes commentator Howard Cosell — a legend of sports journalism and another authority figure — has no compunction about delivering his blow-by-blow with his arm draped possessively around the shoulders of his co-commentator, King colleague and fellow tennis player Rosemary Casals (Natalie Morales, very convincingly CGI'ed into the original Cosell footage). It's so... ugh.

Perhaps the more trenchant history lesson that Battle of the Sexes has to offer is this one: Behind every victory, even a short-lived one, is another campaign for dignity and respect waiting to be started. Battle of the Sexes does a lovely job of depicting the absolute necessity of King keeping her homosexuality a secret. This is as much a sweet and gentle romance between King and new girlfriend Marilyn (Andrea Riseborough) as it is a story about a push for fairness in professional sports across gender lines. But that relationship had to be conducted outside the public eye, lest it taint the ongoing fight for equal pay and equal esteem.

Battle of the Sexes is a bittersweet reminder that not all battles can be fought at once. And that the battle is still ongoing. ♦

Battle of the Sexes is not showing in any theaters in the area.