A new, board-game-themed café offers all-ages fun, snacks and a place to recruit extra players for any game 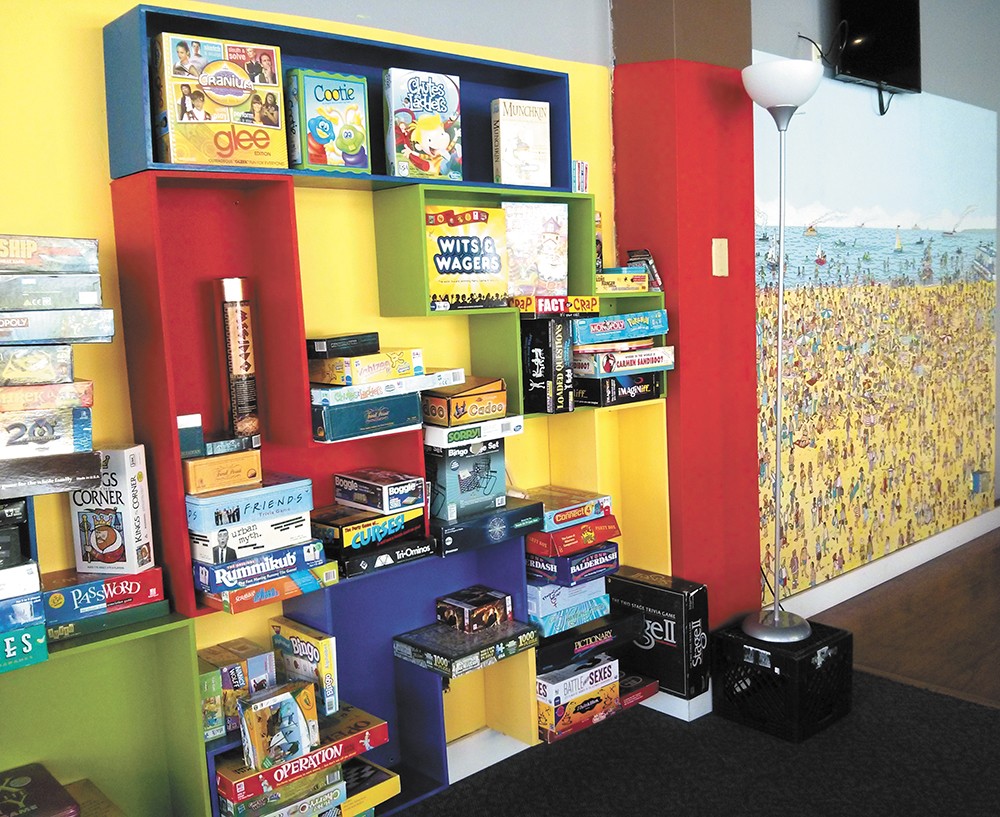 During the day, the street-level windows

fill the space with cheerful, natural light. Later, after dusk has passed, the joviality of casual fun is illuminated from the inside out to passersby on the street, offering a firsthand sampling of the fun to be had at Around the Board.

Opening at the beginning of May, the board-game-themed café set up digs in a prime downtown Spokane spot on the corner of Riverside and Lincoln, in the former Sergio's bar space. With two walls of floor-to-ceiling windows facing the street, the temptation of fun beckons, from a massive Where's Waldo? mural on the wall to a Tetris-inspired shelving unit packed with board games of every type, both classics and recent releases.

Owner Jennifer DeHart discovered the game café business model last fall, and after researching similar, successful setups in Canada, Asia and major U.S. cities, she launched a Kickstarter for Around the Board in January. The crowdfunding campaign didn't reach its goal, but DeHart says it still helped her market the idea and gauge community interest.

The first month of business has slowly gained momentum. On a recent night, the table-filled space, which seats 50, hosted a local gaming group, along with families, couples and a kids' birthday party. In all, the café stocks about 75 games for customers to play, most of which are board-game classics like Life, Monopoly, Apples to Apples, Sorry!, Chutes and Ladders, etc.

There's no hourly rate to play games at the shop, but DeHart does ask that customers purchase at least one item during their visit. The café menu offers sandwiches ($7.50-$8), soup ($3), espresso drinks, smoothies ($4.50) and snacks. Sweet treats from Love @ First Bite Desserts also are being added to the menu. In an effort to keep the business family-friendly, Around the Board doesn't serve alcohol.

The café hosts evening events through the week, including trivia night on Thursdays at 7 pm, and occasional live music. DeHart plans to get the café on the First Friday circuit, too, and soon will open a couple of upstairs rooms to be rented out for private parties and events.

In the coming months, DeHart — who most recently was a manager at an area Hastings store — hopes to partner with Uncle's Games to host game demos and tournaments for games Around the Board doesn't stock; namely strategy-based (like Settlers of Catan), role-playing (Dungeons & Dragons) and card games (Magic: The Gathering, Yu-Gi-Oh!, Pokémon).

"I want to network with other businesses because I don't sell retail here, and I have the space to host events," she says. ♦