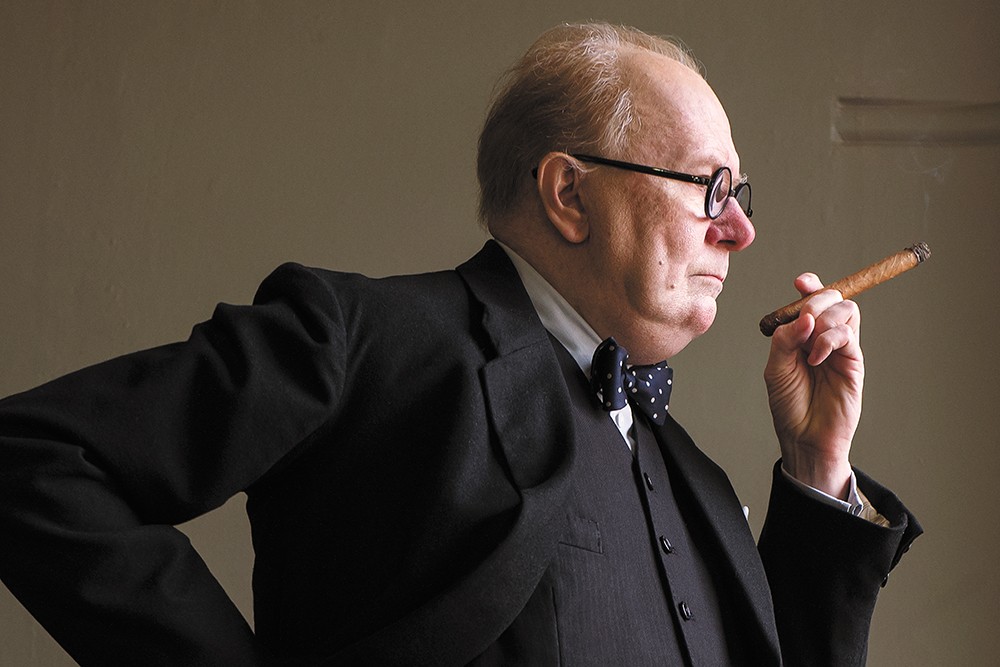 Gary Oldman is unrecognizable, and incredible, in the role of Winston Churchill.

Darkest Hour is about a controversial leader's steadfast refusal

to engage in peace talks in favor of going to war. Not the sort of message you'd expect people to support these days — but I should mention that the leader is Winston Churchill and the war is the one to stop the Nazis. We're not pro-war generally, but pro-that war — yes.

Gary Oldman, aided by many pounds of extremely convincing prosthetics and makeup (designed by the brilliant Kazuhiro Tsuji), plays the portly, gin-blossomed, 65-year-old Churchill in May 1940, when he's appointed Prime Minister following the resignation of Hitler-coddling Neville Chamberlain (Ronald Pickup). Everyone in his party wants Viscount Halifax (Stephen Dillane) for the job, and when it's pointed out (correctly) that the opposition will only accept Churchill, there are grumbles of "Oh, no" and "Not him" around the table. Can't wait to meet this Churchill fellow!

With that lead-up, we are introduced to Winston as he works from bed one morning, grunting, belching and drinking while taking phone calls and dictating garbled telegrams to his new secretary, Elizabeth Layton (Lily James). A great orator with a superb wit, Winston agonizes over the text of his speeches before giving them, aware that his powers of persuasion are only as strong as his words. But he has become cantankerous lately, requiring gentle reproof from his loving but clear-eyed wife, Clementine (Kristin Scott Thomas), whom he adores. If he is to be Prime Minister, she says, he needs to be kind.

He needs to be a lot of other things, too, including stubborn and persuasive. Halifax, Chamberlain and others within Churchill's party want England to try negotiating with Hitler, who is in the process of overtaking France and cornering the entire British army on the beaches of Dunkirk. (The movie gods smiled upon us with the 2017 one-two punch of Dunkirk and Darkest Hour, which cover the same events from different angles.) If the Nazis succeed there, they'll invade England next. Mightn't we be better off if we capitulate now?

Churchill's eventual response, as you know, is "NEVER!" (I've paraphrased it.) Having been one of the few in British politics to recognize Hitler's threat early on, he's convinced that peace talks with this madman now would only result in England's demise. You can't negotiate with a lion when it already has your head in its mouth. Churchill is against peace talks from the get-go, but the film is about his process of confirming that decision, the doubt and anxiety and political squabbles that plague him as he scrambles to salvage Dunkirk. It doesn't help that he's already widely blamed for another costly military disaster — World War I's Battle of Gallipoli — and that King George VI (Ben Mendelsohn) doesn't like him.

If Gary Oldman were to announce his retirement from acting tomorrow, his performance here would be the perfect capstone to an admirable career. Apart from the physical transformation, and besides capturing Churchill's voice and mannerisms, he conveys the immense pressure on the man, his ability to be humorous and self-effacing one minute, a roaring parliamentary lion the next.

Anthony McCarten's pithy screenplay gives Oldman plenty of meat to chew on, including some of Churchill's famous speeches, and director Joe Wright (Atonement, 2005's Pride and Prejudice) guides the drama with a steady hand. It's good enough that we can forgive an undeniably stirring but fairly ludicrous scene where Winston seeks the opinions of ordinary folks on the subway. That part feels phony, but Oldman sells it with the same sincerity as in the film's more authentic moments.

Makes you wish we had someone like Churchill to help fight the Nazis this time. ♦

Darkest Hour is not showing in any theaters in the area.