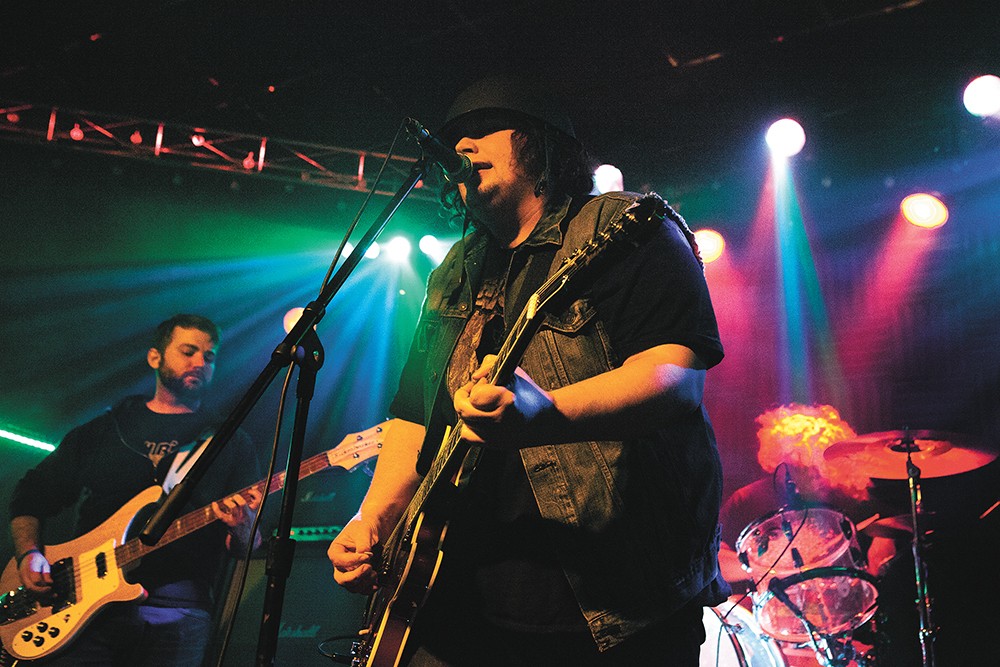 about what they might sound like. If they get you at one of their shows, though, they'll have you hooked with danceable riffs that defy any of your preconceived notions.

The band's practice studio and headquarters are in the basement of a family home in Spokane Valley. Noise-canceling curtains and foam deafen the room that houses drummer Jeff Schell's clear Ludwig kit. On the other side of one of the walls is an ever-growing recording console, with enough racks, lights and panels to make your eyes wander. They hope to eventually turn the lair into a full-on recording studio.

It's a bit of a "bring your work home with you" situation for bassist and lead gearhead Bobby Kluss, who manages the Spokane area's Pawn 1 Music Corners.

"I get to try stuff," Kluss says with a sheepish grin.

His extensive knowledge means that Kluss is always experimenting with all kinds of equipment: He once bought an amp for his bandmate Scott Thompson's guitar rig that had previously belonged to Queens of the Stone Age frontman Josh Homme.

"Before I started hanging out with Bobby, the gear I had I thought was cool," says Thompson, laughing. "But this shit got out of hand quick."

It's obvious that Kluss, Thompson and Schell put as much consideration into their gear as they do their songwriting, and they're aware that those obsessions might inspire scoffs from other musicians. But the gloss of vintage equipment and straightforward rock riffs disguises the band's goofy satirical streak: Their song "It'll Be Soon" dabbles in conversation about global warming, and their bobbing "The Best Ass in LA" shouldn't necessarily be taken literally.

"A lot of indie bands will hear us for the first time when they play with us, and they'll say, 'We had no idea you guys were actually good!'" Thompson says. "We like to be underdogs, in a sense. Deep down, we have a chip on our shoulders and want to be a good rock band and write good songs."

The trio often books shows that deliberately challenge those assumptions, playing with acts ranging from country to indie rock to an all-female Iron Maiden cover band.

"There's this indie type, then there's this other side that's more Rock 94.5-type bands, and we don't particularly try to fit into either," Thompson says. "We like that we show up and everybody can enjoy it."

For their debut LP It's Easy When It's Easy, the group, recording both live and on tape, wanted to make a classic-sounding album, but allowed themselves the opportunity to decide how they'd meet that goal. They began casting their hooks for a producer with some self-recorded demos, eventually landing the trophy catch of Rick Beato, a platinum-selling record producer and owner of the Black Dog Sound recording studio in Atlanta.

"It wasn't really that we were dead set on finding somebody," Thompson says. "We had a bunch of songs, and we knew we wanted to get them as best as possible and not have to worry about anything but just playing."

There wasn't a consensus among band members when it came to flying all the way to Georgia — recording on tape across the country isn't exactly cheap — but the opportunity eventually proved too great to pass up.

"I work a lot and I have a family. I can make music in my basement and still have fun," Kluss says. "If we were going to do this, I wanted something to be able to look back at. It wasn't necessarily that he could do something better than what we could do in Spokane. We just wanted to record how our favorite bands did."

Beato ended up being a dream match for the group, picking and tuning kits exactly how they would have themselves, and Schell says their goal on the Atlanta trip became to function as sponges.

"When we got to Atlanta, we started picking up quick that we have all of this stuff already," he says. "It's the knowledge that we couldn't really replicate."

After releasing their CD (which boasts a cover design by artists from DC and Marvel Comics) and playing their two album party shows, the guys in Supervillain hope to play more often and to help record other local acts. Moving forward, they're going to make as few assumptions as they do when they're writing songs.

"When we went to Atlanta, we wrote the title track, 'It's Easy When It's Easy,' on the spot," Kluss said. "Whatever happens, happens. If it's cool, it's cool." ♦