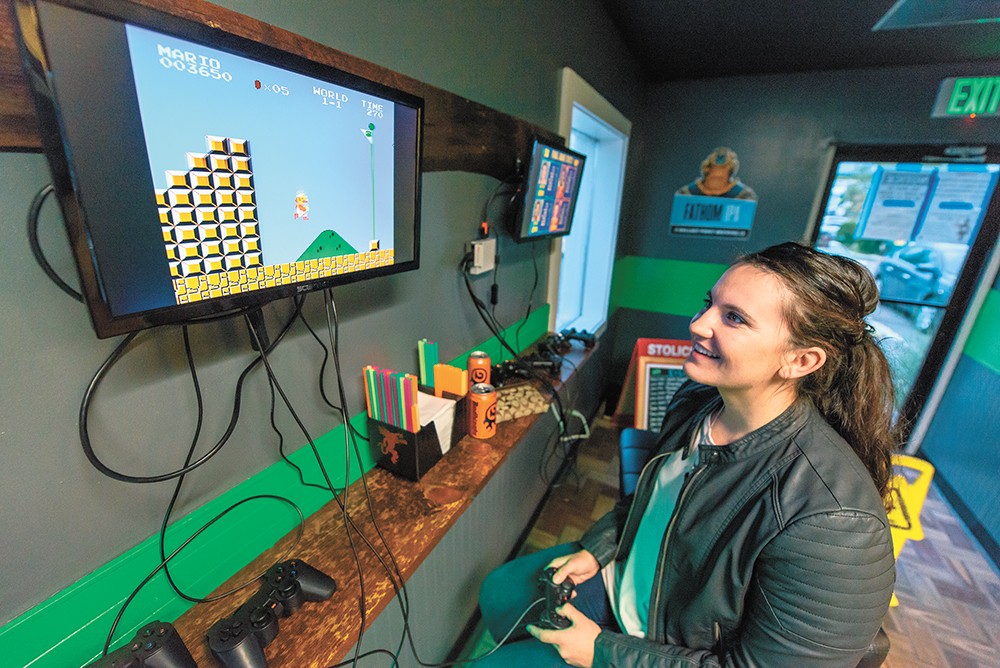 A ninja warrior dashes across the screen as Dylan Lockwood sits comfortably on the couch. It's his second playthrough on the bullet-hell video game Furi on PlayStation 4.

As he's struggling with the third boss on a higher difficulty, speakers blast '90s pop, drowning out the sound of the game. People in onesies dressed as characters like Pikachu, Superman and other pop culture icons dot the crowded room. Neon lights illuminate the space as they sip and enjoy their mixed drinks.

The atmosphere would make for a nice house party, packed full of gamers and anime fanatics. Except this isn't a house at all. This is the area's newest nerd attraction.

GeeksNGlory gaming bar opened in Spokane Valley last November and targets the region's gaming community as its clientele, from casuals to hardcore grinders. Unlike similar local venues like Gamers Arcade Bar in downtown Spokane, which hosts a number of coin-operated arcade cabinets, GeeksNGlory co-owners George Humphries III and Martin Russell went for a different kind of gaming experience. The 21-or-older venue offers free-to-play console video games with the goal of bringing people of similar interests together.

"I like to come here if I'm going out alone because I'll find someone with like-minded interests here," says Lockwood. "If I'm just playing video games at home, then I'm not out. There's no factor of meeting anyone in my own house."

To be able to offer more than 8,000 video games published since the 1980s, the bar set up 10 Raspberry Pi 3 computer systems that emulate several different old-school consoles. The venue also has four stations to play modern games made for the PS4, Xbox One and Nintendo Switch, along with other more recent (yet still considered "retro") consoles like the N64. The video game library for these current consoles stacks up to around 1,000, and it's expanding with new titles weekly.

Russell says GeeksNGlory's goal is to bring back "couch co-op," a phrase for multiplayer gaming in person, rather than against opponents online. Even so, Humphries admits there are many out there more comfortable gaming at home than in public.

"A lot of people kind of do prefer that, and a lot of people who even come here still play online at home, too," Humphries says. "But coming here to actually meet people in real life who have the same interests as you kind of beats playing online with someone you can't see and will never meet."

Despite its focus on in-person gaming, GeeksNGlory isn't ignorant to the growing ranks of online game streamers on the platform Twitch. The venue has a webcam available at one of its console stations for sharing live streams of customer game play to the bar's own Twitch account (found at "geeksnglorybar"). The videos are also posted to its YouTube page.

On a regular basis, GeeksNGlory hosts tournaments and workshops, which Russell says are aimed at pop-culture enthusiasts of all genres. These offerings include tournaments for games like Mario Kart and Super Smash Bros., cosplayer meet-ups, Dungeons & Dragons sessions and bitcoin education workshops.

Elyse Ammon has been stopping by the bar every Wednesday for the past four months for its geek trivia night. She says the venue is one of the few places where she feels comfortable being alone out in public.

"I have horrible problems with anxiety and this is one place where I feel comfortable enough to walk in by myself," says Ammon. "So that's big for me."

Before opening the business, Russell worked in network cyber security and Humphries worked at various bars and vape shops. The co-owners first met at PJ's Pub in Spokane and clicked over their passion for video games.

The duo mainly funded the business venture out of pocket. Russell sold part of his comic book collection along with some bitcoin, while Humphries used a portion of his family inheritance to raise the $50,000 capital to open the bar.

The owners enjoy their new life as bar owners and hope to potentially expand with additional locations, or possibly open up a bar and grill.

The original print version of this article was headlined "Press Start"