Get Out and Drink 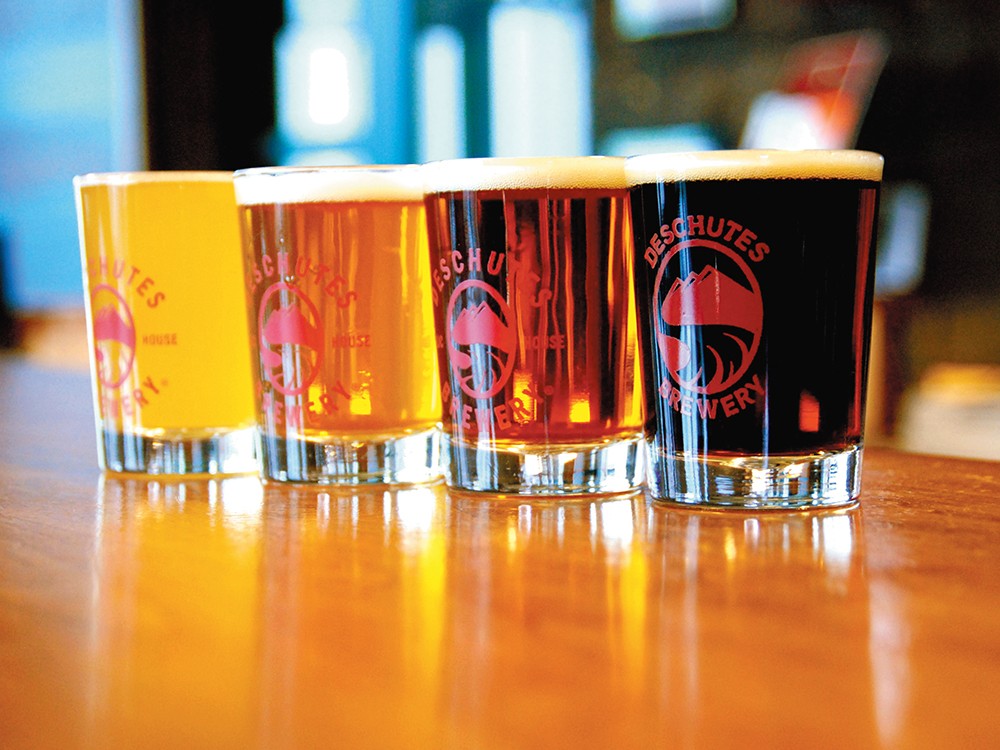 Deschutes Brewery is the largest brewery in Bend and the backbone of the city\'s bustling brewing industry.

First things first: We know there are lots of good beer towns around here. Spokane’s scene is growing. Portland would be an obvious pick. It’s hard to beat the scenery in Leavenworth. But we wanted to give you a few places with high concentrations of good breweries and a beer culture that encourages you to experience more than one during your visit. So, hit the road — then park your car — and get tasting.

In an area with this many breweries (44 if you include all of King County), you’re going to either need to take some serious extra vacation days or whittle down the list to just a few. To help, Dustin Boast of Road Dog Seattle Brewery Tours is willing to make visiting just a few breweries a learning experience. His company offers behind-the-scenes tours of your choice of three breweries. For $79, you get an hour at each brewery with the chance to meet the brewer, tour the facility and learn about the beer-making process, sampling beer along the way. (You also get a T-shirt and pint glass.)

“It’s great for people to explore different tastebuds and styles of beer, from a hefeweizen to an IPA,” says Boast, a Spokane native who started toying with the tour idea in business school at the University of Washington. And, he adds, “we go to places most people wouldn’t go, places where the locals would go, places that are not downtown.”

The city is also home to some excellent beer bars, like Brouwer's Cafe— where there are 64 beers on tap, 300 in bottles and regular beer events like nights with local brewers or release parties for new brews — or The Pine Box, which is holding a beer-can derby next month.

May also brings Seattle Beer Week, a massive 10-day celebration with events like brewer’s dinners, a showdown between three Canadian and three American beers, a tasting focused on women brewers, a night of pairing beer and chocolate and a beer brunch called “Kegs n’ Eggs.” Maybe you should go ahead and ask for those vacation days.

In Bend, people take their beer seriously. The city of 78,000 is home to 18 breweries (including one in nearby Sisters) and also is home to the nation’s fifth-largest craft brewery, Deschutes. Now the city’s tourism bureau, Visit Bend, is investing in efforts to highlight the bubbling industry. Its $40,000-a-year “Bend Ale Trail” program gives free brewery maps and passports to visitors in hopes they’ll visit all 10 breweries on the map, get their passports stamped and come back for a free reusable silicone pint glass as their prize. (Called the Silipint, the cup was invented in Bend.)

“For many years, we’ve been largely a one-trick pony. People primarily visit for outdoor recreation — that’s our bread and butter,” says Doug LaPlaca, Visit Bend’s CEO. So as he saw the beer industry there grow, he gathered local brewers to find a way to capitalize on it. He wanted to get new visitors to town, and the ones who were already there to hit the breweries. So he designed the Ale Trail. Last year about 60 percent of people picking up visitor guides also got Ale Trail maps and passports, LaPlace says. Visiting a brewery has become the fourth most common activity among visitors, according to Visit Bend’s surveys, surpassing cycling in a town where people take that sort of thing very seriously.

Now, he says, “the question in all of our minds is how far can beer tourism evolve?”

The Ale Trail is walkable and bikeable, but you can also go by van, bus, pedicab, electric bike, Cycle Pub (everyone pedals; there’s a bar in the middle), 1800s-style trolley or horse-drawn carriage. We’re not kidding.

If you’re looking to forge your own path, try BeerMeBend.com, where you’ll find not only a list of breweries, but beer-focused happy hours for each day of the week, suggestions of the best places to find good beer and good food, and where to get beer to go (including a growler fill station in a car wash and another in a gas station).

In keeping with Montana’s independent spirit, you won’t find the same guided tours here some other cities offer. But in this outdoorsy college town you’ll find six breweries pouring great beer, and two more within an hour drive, all in the state that ranks third in the nation in breweries per capita. (Find all of the state’s breweries on the Montana Brewers Association Trail Map.)

Big Sky Brewing is a favorite, and for good reason, but we suggest you start with one whose beers you can’t find in Spokane: Kettlehouse Brewing. Their original taproom is a little concrete-floored hole in the wall hidden in a mostly residential area of town. But from their thick Cold Smoke Scotch Ale to the very-Missoula Fresh Bongwater Pale Ale, you’ll find plenty to max out the state’s three-pints-per-taproom limit. Missoula’s newest brewery, Draught Works, has quickly gained a following with good brews, a great patio, the occasional bacon-and-beer brunch and the free pint they’ll give you if you fill your growler on a Monday.

Save Flathead Lake Brewing Company for dinnertime. Newly renovated, Flathead offers three floors of dining and craft beer, from fine dining on the first floor to a pub on the second and something in between on top. The beers are handcrafted at their flagship location on Flathead Lake, but all are available in tasters, pints or growlers in Missoula.

While you’ll probably be happy just to walk from brewery to brewery, Montana’s rugged landscape begs to be enjoyed with beer. Look for outdoor Brewfests in Missoula’s downtown Caras Park every spring and fall. And if the river looks inviting, rent a tube and grab one of Kettlehouse’s Nalgene Growlers for floating the river with something better than all that Pabst the college kids are toting.

Zombies, witches and Adam Sandler: A rundown of the best and worst new horror films you can stream now
Top Stories