Mr. Nethercutt seems to have developed his post-congressional editorial career

advocating for compromise and cooperation on Capitol Hill, which is all well and good — we are in desperate need of both. His New Year's resolution column ("Resolution Time," 1/11/18), however, reads like a laundry-list of half-baked ideas: The president should tweet less (duh); we should avoid nuclear war with North Korea because it "would change for the worse the political landscape, to say little of death and destruction for all nations" (you don't say!); and members of Congress should spend less time fundraising. (I guess he never heard of the Citizens United decision.)

The resolution that really caught my eye was one sentence tossed in at the end: that congressional Democrats ought to drop their general anti-Trump stance and vote with Republicans, ostensibly to improve cooperation in Congress.

What struck me most about this resolution is that there is no complementary resolution for Republicans to be similarly conciliatory. Tossing in an aside urging Democrats to be more cooperative during a time when the values and principles Democrats believe in and advocate for are being dismantled is extremely patronizing and illustrates Mr. Nethercutt's ignorance of the current political climate.

I wonder if Mr. Nethercutt has forgotten the extreme hostility harbored by the Republican Party toward Barack Obama, which manifested as obstructionism in Congress the likes of which had never been seen before. But now that the roles have reversed, the Democrats should just abandon their values and principles and capitulate!

Nobody sensible is advocating that members of Congress be at each other's throats. That's not how to govern effectively. But Mr. Nethercutt is guilty of dismissing Democrats' values while simultaneously instructing them how to legislate, and that kind of unempathetic attitude impairs effective government as well. If he is actually serious about improving congressional relations instead of just putting poorly developed ideas to paper, then he would do well to start by re-evaluating his own perceptions. 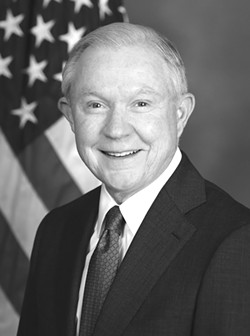 Readers react to our story ("Clouds of Smoke," 1/11/18) about how U.S. Attorney General Jeff Sessions' attitude toward marijuana could affect GOP politicians like Rep. Cathy McMorris Rodgers in states that have legalized cannabis:

Kathy Stoeser Lund: States rights are important only when it is convenient for certain elected officials.

Katie Webb: She needs to decide who she represents... the people of Washington, or Jeff Sessions, whose primary aim in this is to stay relevant, hoping to avoid Trump firing him.

Nathan Lansing: Nonsense. All she has to do is stand up for the people's will as represented by our vote on this matter. If she's in a "tough spot," it's because she puts party before people. We can change that in November. ♦