Get the (Golden) Snitch!

Mothers, lock up your bludgers. Muggle Quidditch has hit Spokane. 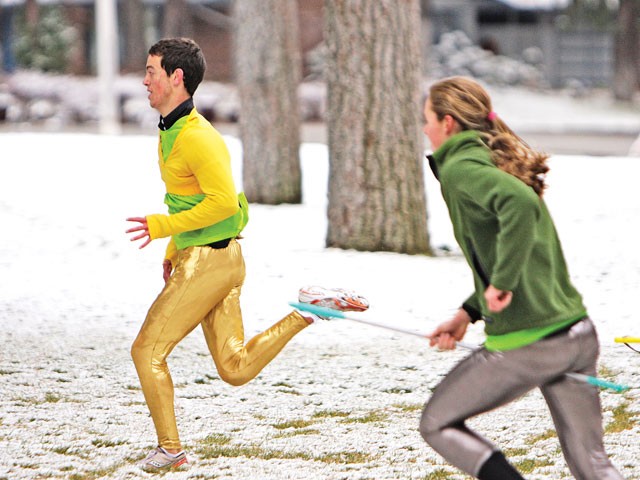 [Photo: Young Kwak]
In Muggle Quidditch, the magical orb has been replaced with a human in golden spandex -- usually cross-country runner Parker Slater

Mothers, lock up your Bludgers. Muggle Quidditch has hit as Parker Slater, wearing skintight gold pants and a cropped gold shirt, is running fl at-out through Comstock Park. He’s moving fast through a mob of teenagers in robes and wigs and wild face paint. Blake Bekken and Annie Pokorny are on Parker’s heels, sprinting too, but a bit awkwardly – not because they aren’t good runners, but because they’re clutching broomsticks between their legs. Besides, there’s snow on the ground — a thin, slushy layer that makes traction unpredictable.

Parker hops, veers right, then left, then veers onto the basketball court. This is a safe zone:

Blake and Annie have to let him go, but they don’t take their eyes off him. Parker is the Golden Snitch. Blake and Annie are the Seekers whose job is to catch him. It was only a matter of time before Muggles — humans who can’t use magic — would try to emulate the most popular sport of the wizard world. This is what it looks like.

Quidditch, the fictional sport from J.K. Rowling’s Harry Potter books, is usually played by witches and wizards who fly on broomsticks hundreds of feet in the air. But Muggles haven’t let a little thing like an inability to fly keep them out of the game. Students at Vermont’s Middlebury College made Quidditch Muggle-friendly a few years ago, and ever since then the game has grown like Voldemort’s forces after the Dark Lord’s return. Today there are more than a hundred teams in the Intercollegiate Quidditch Association. The IQA holds an annual tournament at Middlebury.

The kids at Comstock Park are high schoolers, mostly from Lewis and Clark. They have formed a loose league called Muggle Quidditch of the Lower South Hill. The rules are simple, especially if you grew up with a Harry Potter tome (or seven) on your bookshelf.

There are four teams, just as in the books: Gryffindor, Hufflepuff, Ravenclaw and Slytherin. Scoring works similarly to basketball or soccer: Offensive players (Chasers) pass a ball (Quaffle) between them, and score 10 points each time it’s thrown through one of the goals (hula-hoops attached to PVC pipes). However, there are defensive players (Beaters) whose only job is to hurl smaller balls (Bludgers) at the opposing team. Anyone struck with a Bludger has to drop the Quaffle, fall to the ground, and do a barrel roll — all with a broom between the legs.

While this mayhem takes place, Slater, playing the Golden Snitch, orbits and crisscrosses the field, usually just out of the Seekers’ reach. If one of them manages to grab the pouch attached to his belt, that team earns 30 points. This is why Parker, a varsity cross-country runner for Gonzaga Prep, really, really doesn’t want to be caught.

He darts back across the field, as a Hufflepuff player reminds his teammates in a stage whisper, “Yeah, guys, you need to watch out, ’cause Slytherin will cheat.” Slytherin, from whence dark wizards hail in Harry Potter, has a nefarious reputation even in this mock sport. On the sidelines, Slytherins can be overheard chanting, “Cheat! Cheat! Cheat!” This is mostly a joke, but it’s also somehow sincere. The students slip easily into this kinda-real-kinda-make-believe world.

On this Saturday in October, despite the snow, at least 80 people are in the park for the matches, including several spectators. Nearly every player is wearing something that she knows is ridiculous. Dressing in team colors is required, explains Gryffindor’s captain, Mary Dombrowski. Like the other captains, she’s a senior at LC.

“Team colors” does not mean uniforms. At least, not in the identical sense. Players wear polka-dot boxers, floor-length capes, argyle sweaters — and a couple sport huge crimson kimonos. Mary has painted lightning-shaped scars on the forehead of every Gryffindor. Grant Oakley, Ravenclaw’s captain, is wearing one-piece long johns under the rest of his blue gear. John Loft, a Hufflepuff, is carrying a telescoping feather duster instead of a broom. “Somebody put an expanding charm on it. I can’t get it closed,” he deadpans.

Most of these teens met Harry Potter as children and stuck with him through adolescence. Lots of them, like Mary and Grant, have read all of the books multiple times; many have memorized dialogue from the movies. But there are exceptions.

“I’m the only captain who hasn’t read all of the books,” Slytherin captain Javier Sparks confesses. Sparks is LC’s ASB president; he’s a pole vaulter; and he rock climbs almost every day after school. He’s probably not who you’d expect to find clutching a broomstick and running around with wizards on a Saturday afternoon — but then neither is anyone else here, really.

When Quidditch started last year, the captains say, most players were big Harry Potter fans. Over time, others have gotten into it, because it’s so much fun to play.

Javier got into Quidditch through his friend Kenzi Grow, one of this league’s founders. In 2008, Kenzi (currently a freshman at Whitworth) founded this incarnation of Muggle Quidditch with three other LC students. They found rules online, then added their own flair. Word spread, and people kept asking to play. More than 100 people turned out for their first match.

Most of these kids have lives that you wouldn’t associate with people who play fantasy games. There are varsity cross-country runners and soccer players and drill team members, brainiacs and volunteers for social justice organizations like Invisible Children. Several players are in local bands; Ravenclaw is home to a bunch of Knowledge Bowl members. Star athletes tend to play for Slytherin, and Gryffindor has the most hardcore Potter fans. At any given match, there are popular kids, quiet kids, athletic kids, youth-group kids, even kids who drive in from Reardan. “It brings together a bunch of people who wouldn’t have known each otherwise,” Kenzi says.

Back on the field, Hufflepuff trounces Slytherin, 110-20. To celebrate, Hufflepuff circles up and sings “Huff, the Magic Dragon.”

The Gryffindor players warm up for their match against Ravenclaw by running around the field with their arms outstretched like bird wings. The warm-ups are one of the best parts of Muggle Quidditch; every team has its traditions.

Ravenclaw and Gryffindor are evenly matched, and the score is frequently tied. With a few minutes remaining, players are scrambling on the field. A Ravenclaw is hit with a Bludger and drops to the ground. Another Ravenclaw shoots near the goal, and Javier (now refereeing) shouts, “That’s a no-fly zone! It doesn’t count.” The cheering increases. I find myself actively following the action, something I haven’t done at a sporting event in... ever. Everyone is jumping around and waving their brooms in the air and taking pictures. When time is up, the score is tied 80-80.

A tie is unprecedented, and the captains aren’t sure how to break it.

The captains decide that each Chaser will shoot against the opposing Keeper. Gryffindor’s first Chaser gets in position. The other Gryffindors, in their wigs and kimonos and witch hats, line up and put out spirit fingers. Ravenclaw faces off across the field; they’re screaming and beating their brooms on the ground. It’s a classic distraction technique, but it doesn’t work — the Quaffle goes in. Ravenclaw takes a shot, and misses. The cheering is frantic. Gryffindor shoots again. It’s in! Everything comes down to Ravenclaw’s next shot.

Grant Oakley takes his position for Ravenclaw. He runs — broom in one hand, ball in the other — toward the hula-hoop goal, and throws the game-determining Quaffle.

He misses. Grant falls down in mock horror as Gryffindor explodes onto the field. They are hopping around and hugging each other. They hoist one of their teammates onto their shoulders, even though he wasn’t involved in the tiebreaker. It is bizarre, and perfect.

“That was epic,” one Gryffindor says as she walks off the field. “It was fabulous,” says another. The Ravenclaws and Slytherins seem as elated as everybody else.

The team colors become a blur on the sidelines.

A Friends and Family Muggle Quidditch tournament will be held on Thanksgiving Day at noon at Comstock Park near the basketball courts. BYO brooms. For information, search for “Muggle Quidditch of the Lower South Hill” on Facebook.