Get Your Greek On

Vagelie Karatzas is back in the kitchen. Plus, scones by the lake.

By Blair Tellers and Carrie Scozzaro 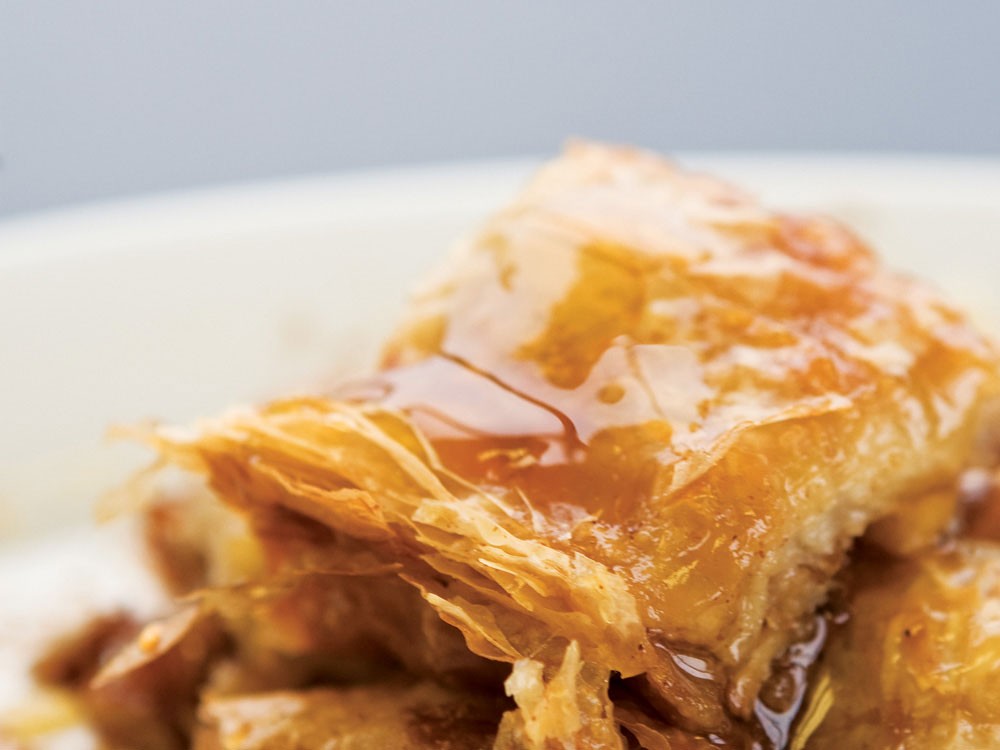 Greek Street's baklava
When Vagelie Karatzas was 19, the Spokesman-Review included him in a story about up-and-coming chefs of the Inland Northwest. Then he chose computers for a career path. Score one for Spokane — Karatzas got that out his system.

He’s back in the kitchen as owner and manager of Greek Street Pizza & More, a family-run business with two locations (his dad runs the other in Coeur d’Alene). The venture is an offshoot from Café Italiano, a restaurant Karatzas’ parents operated in Colville for 23 years.

Distinguishable by its solid hues of blue and white, Greek Street would make Zeus and Nia Vardalos feel right at home.

But that’s pretty much it for ambiance, save for a few tables and chairs.

“We were trying to find something that was right in the middle, and what we found was a ton of high-end restaurants in Spokane, and a ton of fast food, but nothing in the middle that caters to people on the go who want casual dining,” says Karatzas.

Set up expressly for delivery and carry-out, Greek Street achieves just that.

And where Pizza Hut gives the option to add buffalo wings, the “More” part of Greek Street refers to, among other things, spanakopita ($7), baklava ($5) and gyros ($7), “made just like they are on the islands,” says Karatzas, “stuffed with fries.”

Speaking of fries, we like that the spanakopita (soft cheeses mixed with baby spinach, onions and dill, wrapped in flaky phyllo dough) comes with jo-jo-style spuds, plus a side of tzatziki sauce for dipping.

While many of us love Coeur d’Alene all year round, some locals refer to the Lake City in terms of tourist season (when they avoid downtown) and all the other times of the year. That’s our (lame) excuse for allowing the relocation of a wonderful lakeside bakery to slip by without comment. Until now.

Luckily, we found the revamped bakery space inside the upscale Parkside building still looking quite fresh despite having moved in late 2008 from their site a few blocks up.

Fresh-baked goodies, a steaming cup of chai and a good book on a glorious late-summer or early-fall day. Does it get any better? Why, yes it does.

In addition to treats one might expect — bagels, muffins, scones, croissants, shelves full of gorgeously browned loaves of bread — Bakery by the Lake has a mini-bistro. You can enjoy both breakfast and lunch among the potted plants or along the sun-filled counter. The Fire-Roasted Veggie Panini ($6.75) with pesto, artichokes, red pepper and Provolone cheese was all the better on thick ciabatta. Six sandwich options are complemented by daily soups like clam chowder and chunky vegetable beef. Flatbread pizzas can be ordered whole ($10) or by the slice ($2.50).

For your sweet tooth or sweetheart, the display case teems with tempting items: carrot cake ($3.50), softball-sized sticky buns ($3) and Cannoli ($4) — just like those Aunt Florie used have us fetch from the neighborhood bakery back in Queens.

Should you like to waste valuable tummy space in the face of luscious carb-filled options, there are pre-made salads ($4-$5) and fruit cups in the grab-and-go section.