Shopping for music fans isn't easy, but this guide makes it easier

The problem with buying for music fans: Albums are the easiest gift, but they tend to already own all the records they're passionate about. Sure, you could buy them some new tunes you think they'd dig, but that's always a risk. With that in mind, here are a few vinyl options they're unlikely to already have in their catalogs, plus some more outside-the-box ideas. 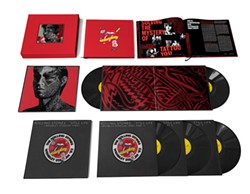 It is absolutely wild that it's been 40 years since the Rolling Stones last truly classic album. This new box set captures the glory of the Tattoo You era with a remastered version of the record, nine unreleased Lost & Found songs, and a three-LP rendition of the band's 1982 Still Life tour stop at Wembley Stadium. As "Start Me Up" suggests, the band seemingly will never stop. (A four-CD box set is also available.) $198 • therollingstonesshop.com You can finally physically bring Inside inside. Bo Burnham's Netflix musical film/comedy special might be the only meaningful piece of pandemic art to date. The album surprisingly stayed at the top of the Billboard charts for a few months based only on streaming numbers, thanks to the catchy and emotionally cutting digital-age humor of "Welcome to the Internet" and "All Eyes On Me" (plus the incredibly TikTok-able "Bezos I"). Now it's finally a tangible product for our intangible times. $35 • Releases Dec. 17

THE STORYTELLER: TALES OF LIFE AND MUSIC BY DAVE GROHL

It's too bad Dave Grohl doesn't have any stories to tell. What's that you say? He actually grew up around the thriving Washington, D.C., hardcore punk scene, became the drummer in Nirvana as they created a cultural moment and became the biggest band in the world, then turned his self-recorded solo project Foo Fighters into another one of the biggest bands in the world, and met every major music star along the way?! OK, fine, yeah. His new memoir might have an interesting story or two... $30 • Auntie's Bookstore 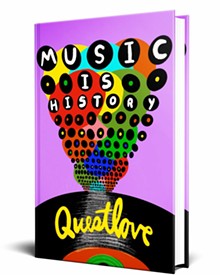 MUSIC IS HISTORY BY QUESTLOVE

As anyone who saw his documentary Summer of Soul can attest, Questlove is a viable musical historian. In his new book, Music Is History, he picks one song for each of the past 40 years (starting in 1971) and uses it as a lens through which culture, politics, race and the music of the moment can be viewed. Considering how much of our own personal history and memories can be tied to the music we were listening to in a given year, the book's structure really makes sense as a framework for analysis. $30 • Auntie's Bookstore

There's no dirtier word in the punk rock lexicon than "sellout." Music journalist Dan Ozzi digs deep into the last pre-streaming industry boom period for the genre by telling the stories of the major label debut albums from 11 of the era's most notable bands — ranging from the massive successes (Green Day, My Chemical Romance) to the commercial failures (Jawbreaker, The Distillers), and even the bands that flopped only to rebound (Jimmy Eat World). $28 • Auntie's Bookstore

Texsens is here to answer the musical question: Why can't I listen to Lorde's "Green Light" on a green light bulb? Yes, this eight-watt LED bulb has a built-in bluetooth speaker and adjustable color wheel (controlled via app) to turn any space into your own private dance club. Snag multiple lightbulbs for a surround sound (and color) experience. $30, texsens.com
click to enlarge Etsy shop 2VinylCats came up with the perfect solution for what to do with old beat-up vinyl records — pop out the center with the album info labeling and turn them into drink coasters. Sold in sets of four, these nostalgia-packed colorful creations come in a variety of genres: '70s classic rock, jazz, country, British Invasion, folk, R&B, and even Christmas. It's certainly the coolest place to rest your cool drinks. $25 • etsy.com/shop/2VinylCats

Looking for a way to represent someone's favorite song? Georgia artists Jenny Lee and Justin Roberts came up with a gorgeous solution in the form of their custom-made wood carvings of sound waves. The couple will transform any tune into a hangable piece of art (28 by 8 inches) finished with a black or walnut stain. You can further personalize things with customized wording above and below the wavelength, be it the artist/title info, lyrics, or your own heartfelt message. $250 • uncommongoods.com 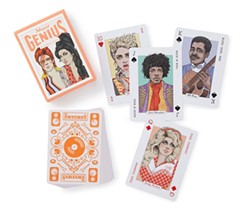 Even if you're not a card shark, the Music Genius deck of cards is rad simply as a work of art. Illustrator Rick Lee divides 54 musical icons into suits — pop for hearts (Prince, Madonna, Beyoncé), blues/soul/R&B for clubs (Billie Holiday, B.B. King, Winehouse), folk/country for diamonds (Cash, Dylan, Dolly), rock for spades (Elvis, Springsteen, Cobain), and jokers (Bowie and Bjork) — creating a vividly drawn cast for the most sonically diverse game of Go Fish around. $10 • ucommongoods.com

An underdiscussed heartbreaking loss during COVID times? Karaoke bars. But you can make anywhere your karaoke stage for friends and/or family with this combination bluetooth microphone and speaker. Connect to your phone and hear music blast out of the side speakers, then belt along with controls to tweak your voice's treble, bass, and echo. (I call dibs on singing "Wrecking Ball.") $50 • uncommongoods.com

If your music lover is more of a doer than just a listener, a subscription to MasterClass might be a perfect fit. The online lesson service has a cache of 20 music classes from massive names in the industry. Want to learn the songwriting craft? Alicia Keys, St. Vincent and Nas are here to help. Trying to pick up an instrument? Study guitar with Carlos Santana or Tom Morello, drumming with Sheila E., or violin with Itzhak Perlman. Want to learn about film scoring? Take Hans Zimmer or Danny Elfman's classes. $180 (one-year membership) • masterclass.com. ♦