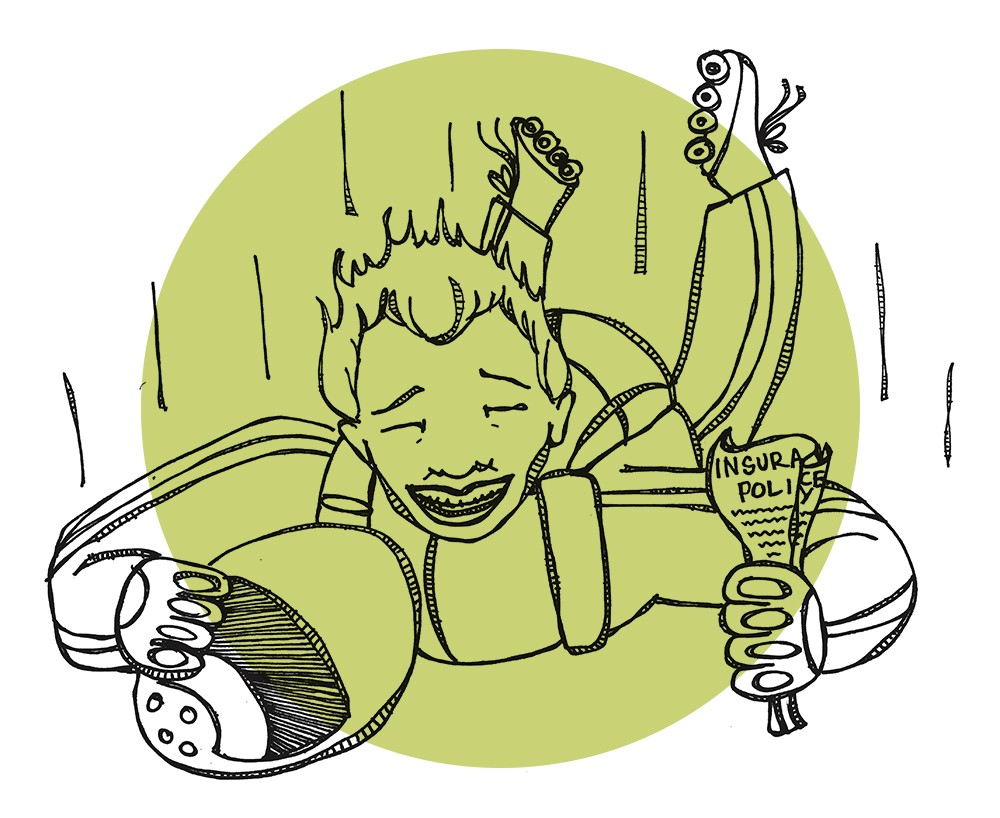 Thanks to recent legislation that — depending on which cable news you consume — may be the first sign of a socialist apocalypse, many people you know now have health insurance. Knowing that they now won't lose everything they own if they end up in the hospital, the newly insured friend on your shopping list is now able to engage in the sort of activities that very well might land them in the hospital. Like, as you see on the cover of this issue, adopt a freaking snake. Don't judge. That insurance card might as well be an Ironman suit for this individual; let them enjoy this ill-advised notion while they can.

Here's a discussion that happened sometime long ago: "So, I was thinking. You know how we've been looking for something affluent white people could do during the winter? I think I've got an answer. How about we strap pieces of wood to their feet and send them down a sheet of ice at speeds that our old-timey minds can't quite comprehend. We'll call it Death Sliding! "They ended up changing the name to "skiing" and it's not that dangerous. Unless you're an idiot, which your friend might be. Whatever. Give him or her a pass to one of the several picturesque Inland Northwest ski resorts and let 'em go wild. $25-$489 depending on age • Mt. Spokane Ski & Snowboard Park; $49-$999 depending on age and usage days • Schweitzer Mountain Resort • schweitzer.com; $25-$725 depending on age • 49° North Mountain Resort • ski49n.com

Dude has health insurance — he can eat whatever he wants! And however much he wants! No consequences, either — at least none that can't be solved at the hospital! One of the most sizable food items in the Inland Northwest fit for single-person consumption is the five-pound pizza at Pizza Rita. If he eats the whole thing himself in 30 minutes, it's free. But that might not happen, so get him some Rita Bucks. That way, he won't be left on the hook if he hurls three pounds in. Pizza Rita • 502 W. Indiana; 5511 N. Wall; 201 N. Pines • pizzarita.net

Your uninsured friend has spent years gazing at the majestic waters of the Spokane River, hoping to someday get all up in those rapids. Maybe get a little wet. Maybe pull some real Lewis and Clark shit. Give him a chance to try it out with whitewater kayaking lessons from Spokane-based Flow Adventures. The six-hour course should get him primed for his new life as an adventurer. $150 • Flow Adventures • 242-8699 • flow-adventures.com

The ultimate test of invincibility? Just get in a plane, wait for it to reach an appropriately terrifying elevation and then jump out of said plane for no good reason other than the fact that you paid to do so. It's called skydiving, and it's probably the best way to get acquainted with the greater Spokane area — seeing as how you'll see it rapidly approaching from below and all. You uninsured pal will have a professional tied to her back, so she'll have an extra sense of invincibility. Like Superman — if Superman had a guy strapped to his back. $225 for a tandem jump, plus $1 per pound over 190 pounds • West Plains Skydiving • skydivewestplains.com ♦