Matthew McConaughey goes on a crazy, but sometimes boring, mining adventure in Gold 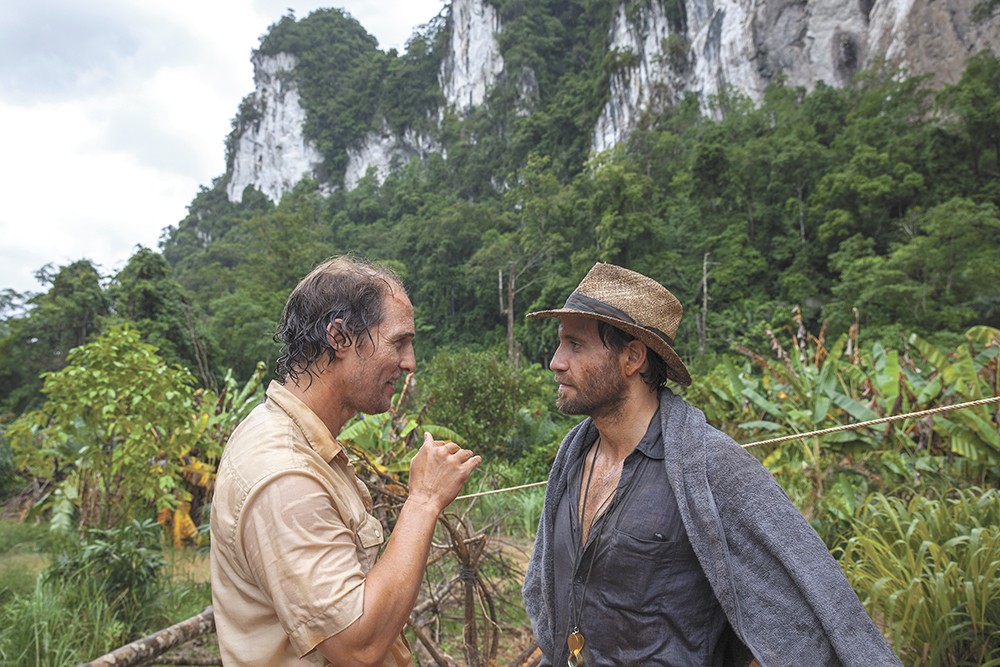 Matthew McConaughey gets sweaty and bald for his role in Gold.

Do you enjoy watching men get excited about making lots of money?

Have I got a movie for you! Come on down to Gold! If you kinda liked The Big Short and The Wolf of Wall Street but found them a bit too pretentious with their "satire" and their "relevance," then Gold is just the thing. There's nothing fancy-pants here... just underpants, like a potbellied Matthew McConaughey prancing around in tighty whities. Fun for the whole family!

Well, maybe don't bring the kids to Gold: they'll be bored with all the three-piece, high-finance shenanigans, and there's tons of naughty language flying around. It's not a terrible excuse for entertainment for the grown-ups: it's just very, very familiar. Men and money, the struggle and the hustle. Trying to bed new women, when the ones who stuck by 'em when they were poor are no longer stimulating enough. Thinking they did it all on their own and pushing away the people who supported them — or who actually did all the work — and got none of the kudos. (How familiar is this? We just had the same basic story in The Founder, though that movie is a far superior telling.)

Gold represents a whole bunch of paradigms that desperately require a shift, not just in Hollywood but in the real world, which are jumbled up together here because this is "inspired by true events." Gold is based on a 1990s situation involving Canadian company Bre-X Minerals, but if you didn't already know about that, don't spoil the movie for yourself by googling it.

Suffice to say that reality was altered enough by screenwriters Patrick Massett and John Zinman that they could have altered it a smidge more and not been quite so clichéd about it all. The Canadian company has become Washoe Mining of Reno, Nevada, headed up by Kenny Wells, played by McConaughey in what we now must deem his full-on gimme-an-Oscar mode: Not smooth or suave, but sweaty and blowzy and faux bald, suffering from a deplorable excess of personality, showing off all the weight he gained in comic scenes of near nudity.

Wells is "a drunk, a clown" who latches on to geologist Michael Acosta (Edgar Ramírez) and his awesome intuition about where gold might be found in a remote valley in Indonesia. This allows director Stephen Gaghan (in his first feature since 2005's Syriana) to stage a couple of nice shots that look like something out of Raiders of the Lost Ark, with dudes in Indiana Jones-ish hats gazing out over the jungle, but this is not a treasure-hunt adventure. Soon, investors from Wall Street in their sleek suits are desperate to invest in what looks like the "largest gold mine of the decade" (and, later, the largest one "ever"), but Wells is stubborn and wants to maintain control of his find.

Except... it's not really Wells' find: It's Acosta's, and for a long while I wondered why Gold wasn't Acosta's story. And if it had been Acosta's story, it would have automatically smashed many of the clichés that bring Gold down. As is, we're meant to identify with Wells' refusal to bow down to the big boys with their corporate might, and his tenacity in sticking with his "dream." But in spite of McConaughey's entertaining gusto for the character, Wells simply isn't very interesting.

Wells is, in fact, ultimately rather contemptible for reasons that — no spoilers — undermine the little bit of meat that Gold has: its mild condemnation of the house of cards that is high finance, of the corruption and collusion among governments and corporations.

Gold seems to be implying, for a little while, that it's a bad thing when everyone here seems to think that as long as they're all getting rich, nothing else matters, not even reality — like having an actual lump of gold to hold in your hand. But the movie ends up seeming to condone such attitudes, without even realizing that it's doing so. Wells may be bursting with purpose, but Gold certainly isn't. ♦

Gold is not showing in any theaters in the area.