The Farrelly brothers have grown stale. 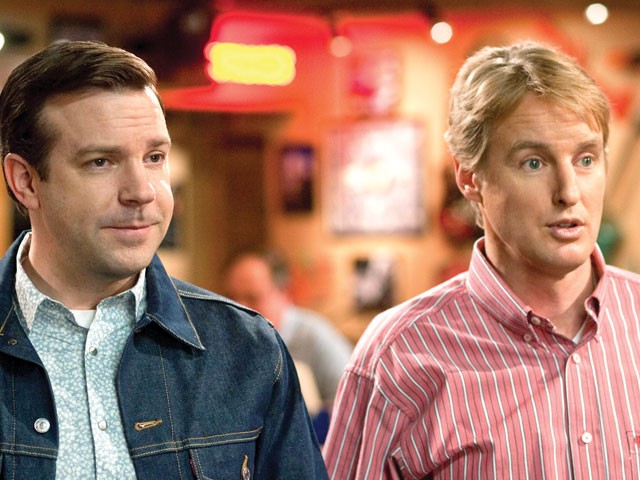 Apparently, they were set free to make an awful movie.

Whatever happened to the Farrelly brothers? Back when they were making outrageous but sweet and clever movies (think Dumb & Dumber, There’s Something About Mary, Kingpin), you were guaranteed two-dozen belly laughs. Hall Pass features maybe six laugh-aloud moments, along with a whole lot of formulaic filler.

Of course, that’s Farrelly formula, which translates, I would imagine, to notes written in at strategic points in the script. So we’re cruising along in the story of two reasonably happily married couples who get caught up in the (wives’) idea that the husbands should get a sevenday-long “hall pass” — in other words, a week of total freedom from any marital commitment. OK, boys, go out and do whatever you want, with whomever you want. Sow some of those wild oats, if you’ve still got ‘em, then come on back home and our marriages will be stronger than ever. You won’t ever have to look at another woman again. (Right.)

“Hey, here’s a good spot for another explosive diarrhea joke.” Or “How about some full-frontal male nudity? But wait — let’s make sure the black guy is three times bigger than the white guy. Har har har!!!”

There’s nothing wrong with a little crude humor, in small doses. But the Farrellys don’t do small doses. Their “shocking” raunchiness has become repetitive.

Rick (Owen Wilson) and Fred (Jason Sudeikis) are the happy but hapless husbands who are accused by their wives (Jenna Fischer, Christina Applegate) of gawking at beautiful babes, even when the couples are out walking side by side, which sets the “pass” idea into motion.

Fairly harmless behavior for such a drastic decision, don’t you think?

Things, of course, don’t go as planned. The film’s big long-running gag is that neither guy has a clue about what to do with his newfound freedom. Is heading to a local Applebee’s to “reel in the babes” truly the right way to start? Even their poker-night pals can’t help.

Neither can all the stilted dialogue, or all the actors looking like they’re trying to act. Nothing, in fact, can help this movie.

About an hour in — when most viewers will have succumbed to the fact that the Farrellys are just mining old material — the movie gets a boost with the introduction of Coakley, a so-called legendary womanizer and manabout-town: Just the fellow to guide our heroes to some big-time sex action. As played by Richard Jenkins — the film’s lone strong actor — Coakley is the coolest character around. Alas, he’s given far too little screen time.

The desperate final reel features an overabundance of wild and crazy guys, along with the standard dose of Farrelly sappiness. At least there’s one solid laugh all the way at the end of the credits. I suppose it’s a good idea leave the funniest bit for last.