You know the Madonna/ whore dichotomy? Nine has that and several other stereotypes 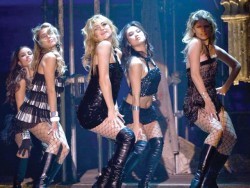 Am I alone out here, or are there others who feel that, with the exception of the brilliant La Strada, Federico Fellini was making movies that only he understood? I mean, who are these pseudo-intellectuals who have been pontificating for decades on the remarkable insight of the fabled director, or the true meaning of his densely layered (definition: confusing), supposedly autobiographical films? Hell, a recent book of interviews with him featured an introduction that stated, “Fellini enjoyed obfuscation, and his own recollections about his past varied according to whim.”

Which brings me to the inordinately over-praised 8 1/2, a film that, after four viewings over the years (one time I was very stoned), still remained a puzzle to me. By the time I gave up trying to watch it, I didn’t even want to know what it was about. The less said about Satyricon and Amarcord, the better.

Then along came Rob Marshall and his multi-Oscar-winning film adaptation of the splashy musical Chicago: ridiculous story, instantly forgettable songs, overuse of close-ups, a body double for Richard Gere’s dance steps, MUCH TOO LOUD.

Funny, then, that the pairing of Rob Marshall’s direction of material based on 8 1/2 has resulted in one of my favorite films of the year.

Set in 1965, much of it on a shape-shifting soundstage at Cinecitta Studios in Rome (where Fellini did most of his work), it’s the story of once-successful Guido Contini (Daniel Day-Lewis), a director who’s sorely in need of a comeback film. He’s even scheduled to begin production on one. Just one problem, though: He’s out of ideas. The sets are built, the actors are arriving, and he hasn’t even started the script.

Cue the singers and dancers, and fire up the befuddled director’s fevered imagination. Bring on a series of current and remembered visits by a bevy of women in his life (Nicole Kidman, Kate Hudson, Fergie), including his long-suffering wife (Marion Cotillard), his mistress (Penelope Cruz) and his pushy mom (Sophia Loren), and let ’em burst into song. (Hudson and Fergie are standouts.)

Somehow Marshall shapes a jumble of disparate segments into a shimmering thing of beauty and excitement, of fantasy and reality. It’s both a character study of a talented and troubled artist and a pointed peek at the creative process.

Best of all, even though I don’t intend to revisit 8 1/2, at least now I know what it’s about.