Global Neighborhood Thrift gives jobs to a community that desperately needs them.

For just a moment, Hari Adhikari, a 61-year-old refugee from Bhutan, plays the part of thriftstore cashier. “Hello, how are you?” Adhikari says, “Can I help you with you with anything?”

For the past four weeks, Amy Hendricks of Global Neighborhood, a local refugee-aid organization, has been giving these two men a crash course in both the English language and American customer service. They review customer service philosophy, compare cultural differences (no telling people they’re fat in America), and scan through flashcards. On Saturday, they started their first day of work.

In a dramatically transformed building that used to house the Spokane Dance Company studio, Hendricks and her husband, Brent, have opened Global Neighborhood Thrift, a second-hand store in the vein of Value Village or Goodwill. But here, the purpose is different: The primary goal, beyond selling secondhand wares for low prices, is to employ refugees like Adhikari and Salih. For the past four years, the Hendricks’ nonprofit organization Global Neighborhood has been trying to connect refugees with jobs through networking. But when donations began to stream in that they didn’t know how to use — donations of clothes, appliances and furniture — Global Neighborhood hit on the thrift-store idea, a way to employ a few refugees directly.

“The fear that there are immigrants taking our jobs isn’t accurate,” Brent says. “They can’t find work.”

Anyone who’s tried to find a job in the last few years knows how difficult it can be. Now imagine you’re a minority. And you can’t speak English. You don’t have a résumé, and all the employers you’ve ever had can’t be reached for reference. Now imagine that whatever education you have is worthless on paper, that there are vast cultural differences where you’re from, and that, on top of all that, you’re competing with the slew of college graduates forced by the economy to seek entry-level jobs.

Brent Hendricks says 500 to 600 refugees come to Spokane a year — all unemployed. For 90 to 180 days, they may receive resettlement assistance from World Relief, but after that, they’re on their own. Worse, they start out in debt — owing money for the plane ticket it took to get over here.

“There’s this perception that America is the land of milk and honey where money grows on trees,” Hendricks says. “Their families don’t understand. They’re expecting to get checks sent back from America. Really it’s reverse. The families here are asking for money from the families back home, because they don’t have enough to get by.”

But he starts with just two, Adhikari and Salih. Adhikari spent 18 years of his life in a refugee camp in Nepal. He needs money to help his 21-year old son attend Spokane Falls Community College.

Salih, meanwhile, has had played many roles in life: family lawyer in Iraq; a student of psychology, philosophy, and religion at universities throughout the Middle East; one of the first captains in the new Iraqi Army.

Salih imitates the sound of a machine gun, explaining what happened when insurgents ambushed his brother — driving Salih’s car — thinking it was him. His brother was killed, and with his family in danger, he left for America. And even in Spokane, Salih has had troubles.

Both refugees have ambitions for the store.

Adhikari wants to help to connect the Bhutanese community — and everyone else — with each other. Salih wants the store to grow and expand.

“I hope we have a Global Neighborhood [thrift store] in the whole United States,” Salih says.

For Brent Hendricks, the goal is simpler, but still ambitious: Do everything at this thrift store better than the competition.

“We want to approach it with excellence,” he says.

“Refugees are essentially running this store. How people view this store is how people will view the refugee community.” 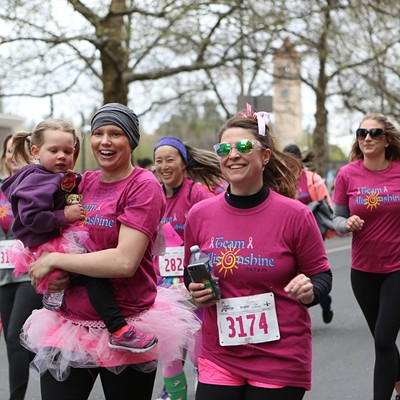