Washington's governor on the $2 billion hole, a new sales tax and that one guy ... what's his name? The new mayor of Spokane? 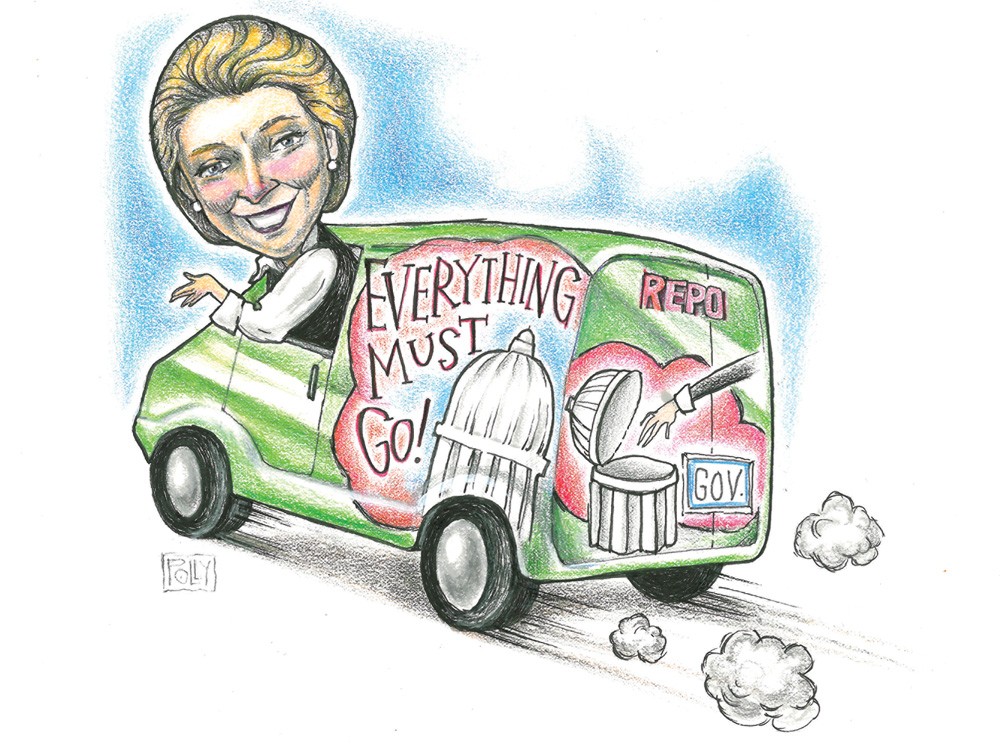 For the next month, and likely longer, it’s all about half-a-penny in Olympia.

Find out what Spokane's state legislators think about the special session

That’s what Washington state Gov. Chris Gregoire wants to raise the sales tax by to help cope with the state’s continued money problems.

Legislators already cut $4.5 billion from the state’s books earlier this year. Now the governor has called them back to cut another $2 billion. She’s proposed cuts of $652 million from human services, $97 million from education and $30 million from corrections, among others.

But the half-cent tax on every dollar spent would buy some of this back, she says. Half a billion, in fact, would go back into state coffers — to help fund education, mostly. And, three years from now, the tax would expire.

As Spokane-area legislators were packing their bags to head over the Cascades, The Inlander spoke to the governor about gutted budgets, broken politics and ominous elections.

INLANDER: You’re very gloom-and-doom about the state’s budget. How did things get this bad?

GREGOIRE: Well, you know, we as a state were flourishing in my first term in office. And then, basically, Wall Street melted down. When that happened and we had the banking crisis that hit all across the country, there were only two states that were not impacted. … And then most recently, we were gradually seeing a recovery and the Congress failed in August [to broker a bipartisan solution to the nation’s debt crisis]. When that happened, because we’re a sales-tax state, it took consumer confidence to a huge low. We saw it immediately and directly in our state. That ended up in a $1.4 billion projected deficit. We’re still at risk, candidly, going forward, and that has to do with Europe and Greece and Italy, if that precipitates a banking crisis. That could impact us. That could be a problem.

Last week, the congressional “supercommittee” failed to figure out how to cut $1.2 trillion from the nation’s debt. A Democratic colleague of yours, U.S. Sen. Patty Murray, helped lead that committee. What happened? Is politics broken?

I just don’t understand Washington, D.C., right now. Here we are out in the real world in the states, struggling mightily to recover. And all we get is partisan politics out of Washington, D.C. I gave [Murray] some ideas of how to reform Medicaid. She stepped right up to it and was putting those on the table. But without a mix of options to get to $1.2 trillion, [any deal that didn’t include tax increases on the wealthiest Americans] was not satisfactory to her. So a hard line was driven by both sides. The result is failure again.

You promised during your re-election bid not to raise taxes. Do you regret that now that you want to raise the sales tax?

We’ve already cut $10.5 billion. We have reformed more than has been done in a quarter-century. We’ve had state employees sacrifice, along with K-12, to the tune of $2 billion. And now here we are with another $2 billion problem. … I couldn’t, in good conscience, [ask for a sales tax increase] without recognizing first I wasn’t going to get a two-thirds vote in the Legislature. So now’s the time to go to the people of the state and say, ‘It’s your decision to make. What future do you want?’

What do you think they’ll say?

I’ve got a job to do to educate. Some are skeptical: Is it really three years? Well, that’s their decision. The vote they will take will sunset in three years, period. … I’m hoping that when they see what I’ve seen, we share the same values that they’ll say, ‘You know, for a half-penny, despite the fact that these are tough times, we’ve got to do this.’

You’ve made some heavy cuts to state services in three years. Are you worried at all about your legacy?

I look back at 40 years, frankly. I’ve been in public service for 40 years. Everything I’ve worked for, stood for, I’m looking at cutting in the budget. So it’s personally very disheartening. But I can’t be disheartened. I’ve got to move forward. The only legacy I feel I can leave now is one that says I saw us through some of the worst of times.

Governments around the world are having a tough time with deficits and the economy. How could government work better?

I had the occasion to travel in this job and before. I’ve looked around the world, and I wouldn’t live anywhere else. We’re not perfect — that’s obvious now. But, to me, this is the greatest nation in the world. We need to step up as a country and realize that we’ve got to make some changes here. How we got into this recession is a combination of materialism and greed. We just can’t get there again. We’ve got to be smarter, we’ve got to be better, we’ve got to be stronger than to allow ourselves to get into that kind of predicament again. Because when we do, we run havoc over people, our basic infrastructure for the future, and our ability to compete in what is becoming the most competitive time in history.

What if we had an income tax?

In Washington state, our tax structure is antiquated. There’s just no question about it. We have built a tax system on a manufacturing economy, and we are no longer a manufacturing economy. We are a service-based economy. … So at some point along the line, I think we’re going to have to face it. We need to do something about it. I can’t see making that happen in the worst recession in history, so I’m trying to see us through the crisis. … People think we raise taxes all the time. We haven’t raised the sales tax as a state since 1983 — with a Republican governor in the middle of a recession. What is also telling, when you go as far back as 1997, we were spending about $65 per $1,000 of personal income. Here we are in 2011, and it’s down to $48. You can see what’s going on with our tax structure.

We just had a city election in Spokane, I’m not sure if you were paying attention …

I don’t get it. I don’t get it. What I really don’t get in Spokane is ever since we’ve gone to a strong mayor, we can’t re-elect one. No matter what they say or do, we can’t re-elect them. Frankly, I don’t understand that. I don’t know the individual who was elected — frankly, I don’t know the name yet of that person — I’ll work with that person. But Mary Verner was a heck of a partner. She worked hard, always focused on what was good for Spokane, thoughtful. And she didn’t get elected again.

Is this an ominous thing for Democrats going into 2012?

No. I think the country is not happy with either party. It used to be that they’d say, ‘Well, I don’t like Congress, but my member of Congress is just great.’ Well, I don’t hear that that much anymore. … The bottom line is, to me, the legislative process is built around compromise. … That lesson has failed miserably in Congress right now. I don’t know where the public will go, but they’re angry, they’re afraid and they want change. They want a Congress that will get something done.

From the Mouths of Legislators