GM Unveils Its Driverless Cars, Aiming to Lead the Pack 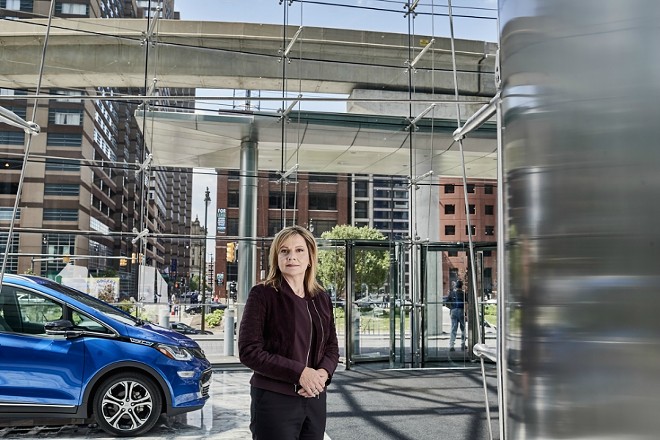 Joe Vaughn/The New York Times
Mary Barra, the chief executive of General Motors, with a self-driving Chevrolet Bolt EV at GM headquarters in Detroit, June 2, 2017. GM is redirecting energy and capital toward a race with Silicon Valley to create self-driving cars. “We are very, very serious and intent on putting something on the road,” Barra said of the company’s automated vehicles. “We definitely want to be first.”
By BILL VLASIC


SAN FRANCISCO — For more than a year, General Motors has tantalized investors with plans to build its future around self-driving cars.


It has regularly announced big investments and progress reports, but the company has kept its prototype vehicles largely under wraps — until now.

On Thursday, GM will demonstrate its growing fleet of computer-operated, battery-powered Chevrolet Bolts in San Francisco to dozens of investment analysts, who are eager to evaluate the automaker’s advanced test vehicles.

The event represents a critical step for GM as it seeks to establish leadership in the hotly contested race to bring driverless cars to market.

And although GM has been reluctant to show off the cars it has developed through a subsidiary, Cruise Automation, the company now wants to prove that self-driving models are getting closer to general use.

“Everything we are doing is geared to speed,” GM’s president, Daniel Ammann, told journalists at an event showcasing the cars Tuesday.

To emphasize the company’s progress, Ammann said the cars would be ready for consumer applications in “quarters, not years.”

Meeting that goal would probably give GM, the nation’s largest automaker, a jump on other companies developing self-driving models.

GM has a blend of financial resources, automotive experience and management resolve that position it strongly to compete with other automakers and big tech companies. But it also has a legacy of failures to overcome — none bigger than its collapse into bankruptcy in 2009.

The leadership of the company’s chief executive, Mary T. Barra, was tested soon after she took over in 2014 when it was revealed that GM had produced millions of small cars equipped with faulty ignitions responsible for 124 deaths.

The scandal slowed GM’s comeback, but it also galvanized its executives to focus on making its cars safer, and ultimately to pursue development of fully autonomous vehicles.

After GM purchased Cruise Automation for an estimated $1 billion in cash, stock and incentive packages, the companies began installing computers and other equipment in all-electric Chevy Bolts as they came off the assembly line at the automaker’s plant in suburban Detroit.

So far, the partnership between GM and Cruise has produced about 180 autonomous Bolts, which are constantly being tested in San Francisco, as well as in Arizona and Michigan. The company plans to begin tests in New York City early next year.