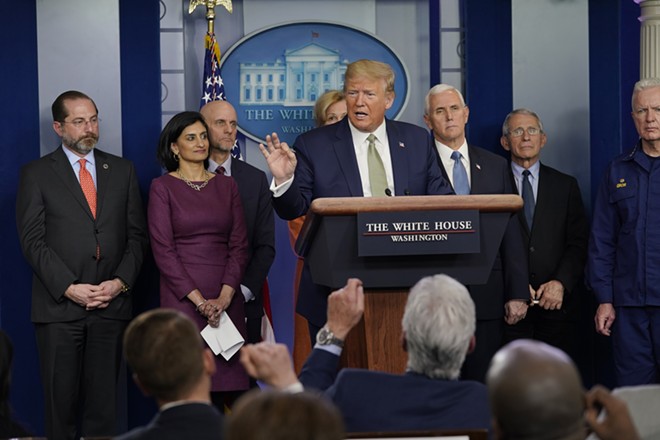 WASHINGTON — President Donald Trump called on Congress on Tuesday to quickly approve a sweeping economic stimulus package that would include sending checks directly to Americans within weeks, as large sections of the economy shut down in the face of the coronavirus pandemic.

“We want to go big,” Trump said at a news conference at the White House, adding that he had instructed Steven Mnuchin, the Treasury secretary, to introduce measures that would provide more immediate economic support over the payroll tax cut holiday that he had been promoting.

Mnuchin told Republican senators later Tuesday that the Trump administration wants Congress to infuse about $850 billion in additional stimulus to prop up the economy. While Trump had signaled that he wanted the payroll tax to be the centerpiece of that effort, it faced bipartisan opposition in Congress, and Mnuchin said time was of the essence.

Later, at a lunch across from the Capitol, the Treasury secretary privately told Republican senators that he envisioned the direct payments covering two weeks of pay and said they could total $250 billion, according to two people familiar with the discussion who described it on the condition of anonymity.

The goal would be to get the checks out by the end of April, Mnuchin told the senators.

Mnuchin declined publicly to put a dollar figure on the direct payments, telling reporters only that, “it is a big number.” Earlier at the White House, he said the proposal would be targeted so it would not go to the highest earners, such as those making $1 million or more.

“This is a very unique situation in this economy,” Mnuchin said on Capitol Hill. “We have put a proposal on the table that would inject $1 trillion into the economy.”

The administration has been negotiating with lawmakers in the House and Senate over the timeline and contents of a stimulus package. Republicans had been reluctant to embrace a narrower relief package the House passed last week that includes paid leave, unemployment insurance, free coronavirus testing and additional food and health care aid, which Mnuchin and Speaker Nancy Pelosi have characterized as a first step to provide relief ahead of a broader stimulus plan to stabilize the economy.

But on Tuesday, Sen. Mitch McConnell, R-Ky., the majority leader, said the Senate would in fact try to pass the House bill first then move onto another economic package of “much larger proportions.”