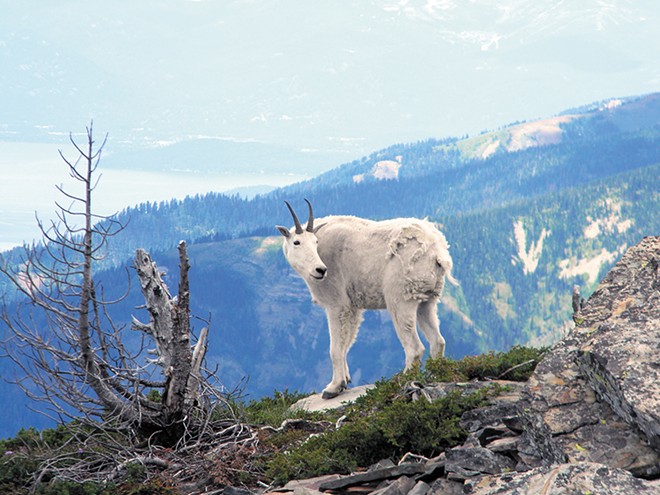 Jake Thomas photo
One of the mountain goats at Scotchman Peak.

Most years, my summer bucket list stays purely theoretical. For example, recently, I've spent a disgusting amount of time staring at photographs on the internet of Montana's stunning Glacier National Park. I've never been, and it looks gorgeous. It's like Yosemite but with lakes, pristine alpine meadows and jagged mountain peaks that take your breath away. Best of all, it's supposed to be a great place for cycling: the Going to the Sun Road, an almost 50-mile stretch of paved road that skirts Lake McDonald and runs through Logan Pass, featuring jaw-dropping views and elevation gain of over 6,600 feet along the way. I'm not going to pretend that I'm in great shape for a lengthy mountainous cycling adventure — I'll likely collapse after 20 miles — but I need to actually give it a stab so that I'll have some reasonably pleasant summer memories to hold on to while I'm swearing at the heaps of snow blanketing the city during the winter months.

But that's a summer trip that requires a bit of long-term planning and travel. Closer to home is Scotchman Peak, a beast of a hike that promises a good workout, epic views and, best of all, white-haired goats. Located just southeast of Sandpoint, Idaho, this day-hike is considered to be difficult. While it's estimated to be only around eight miles there and back, it features over 3,600 feet in elevation gain. (My body already hurts just thinking about it.) However, the peak is said to have spectacular views of Lake Pend Oreille and into Montana, jagged drop-offs, shale rock, and goats. And while there's apparently been issues in the past with the goats getting aggressive with hikers, I'm confident that my inner animal-whisperer will smooth over any temperamental creatures.