Moscow's burning, Egypt's buying and Palouse farmers are ready to make a bundle. 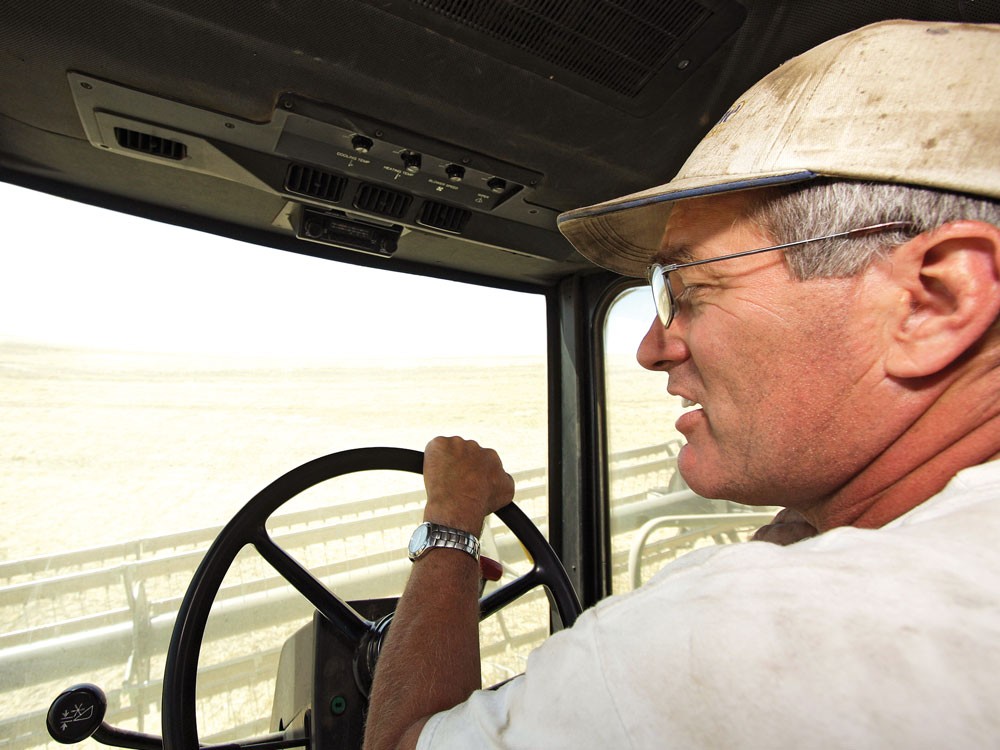 Young Kwak
Ben Barstow has another 30,000 bushels of wheat to sell — and prices are rising.

Inside the air-conditioned cab of a 1983 John Deere combine, Ben Barstow projects his voice to be heard over the threshing outside.

“If you want to make money, don’t go into agriculture,” he yells knowingly. “But if you don’t mind the work, you’ll never find a nicer bunch of people.” He pauses. “I really like the work.”

Below dozens of small clouds and a high, unobstructed sun, Barstow’s harvesting a field of peas, but the topic of conversation is what’s growing elsewhere on his rolling 1,000-acre Whitman County farm. In less than a week, he’ll run his combine over 450 acres of club wheat.

In the meantime, Russia will have officially made good on its promise to ban wheat exports beyond its borders. The decision was prompted by three factors: the country’s hottest temperatures in 130 years of record-keeping, the largest drought Russians have seen in three decades and the massive wildfires that have devoured large tracts of the country’s grain-producing region.

But what’s devastating for Russia could very well be a financial boon for the Palouse.

It’s a turn of events that Barstow — like many other Palouse wheat farmers — didn’t anticipate. A few months ago, when people were telling him, “There’s too much wheat in the world,” Barstow pre-sold 10,000 bushels of wheat for about $5 a piece. In July, wheat prices skyrocketed 42 percent, the largest monthly gain in almost 60 years. Wheat futures reached a high of $8.68 on the Chicago Board of Trade earlier this month.

Now, with the remaining 30,000 bushels of wheat that he hopes to collect, Barstow’s set to make good money — all thanks to one country’s catastrophes, happening half a world away.

“Well, I hope to, anyway,” Barstow says with a chuckle about his potential windfall. “I haven’t sold it yet.”

The pictures coming out of Russia recently are dark and harrowing. Muscovites and tourists wear face masks while wandering through a thick orange smog over Red Square. Entire villages are scorched, their buildings gutted and looking like the remnants of a military air strike. The 800 wildfires that sparked up just a few weeks ago in the wake of unprecedented heat and a massive drought have left scores of people dead and thousands homeless.

But aside from the human toll, the fires have wreaked damage on Russia’s most fertile region, the grain belt that stretches from the Black Sea across the northern Caucasus to western Kazakhstan, ending in the north where Moscow lies.

One-fifth of the country’s wheat crop has been destroyed.

As one of the world’s largest grain producers and exporters — usually producing 10 percent of the world’s output, or 100 million tons of grain — Russia depends on this region not only to feed its people, but also to drive its economy. During each of the last three years, Russian grain exports totaled $4 billion.

On Aug. 5, reacting to a worsening situation, the Kremlin announced that it was banning grain exports from Aug. 15 to Dec. 31. In turn, Egypt, the world’s top grain importer, moved to secure other supplies, buying 240,000 tons of grain from France. Cairo also said that the dramatic rise in prices would cost the country $705 million. Worries about a grain shortage sent prices soaring still further.

“In the last four week, the price of wheat has gone up three dollars a bushel," says Brett Blankenship, president of the Washington Association of Wheat Growers. “It has never done that before in that short a period of time.”

Blankenship, who owns a farm in Washtucna, started farming in his 20s, and he’s been at it for 25 years. He’s witnessed other global emergencies threaten the food supply, but none like this. Regardless, he still has the same reaction.

“This is a primary example of how the world is always one crop disaster away from a food shortage,” he says. Thanks to a “safety net” for American farmers, says Blankenship, crisis is avoided.

“America has a lot of grain to fill the void,” he says. “There are federal subsidies in place for corn, wheat, soybeans and rice. Those are often criticized by people when supplies are plentiful. … A safety net helps stabilize the price [of these crops]. When there is abundant supply, the farmer can still make a living. But a situation like this shows why having a safety net is good public policy.”

While not critical of such policies, other farmers aren’t as certain that the world’s on the precipice of a food disaster.

“There’s a lot of knee-jerk reaction,” says Tom Mick, president of the Washington Grain Alliance. “We have healthy wheat supplies. There’s enough wheat to meet the world demand.” He adds that one more factor will contribute to local farmers having a healthy payday: The late summer has pushed back harvest a few weeks, but wheat yields are up significantly compared to last year, some more than 50 percent.

Mick does agree that farmers could take advantage of the high prices, but adds that if too many try to capitalize on the situation, no one will benefit.

“Farmers are wondering if they should increase their planting of wheat next year,” he says. If too many plant extra acreage, Mick says, production could outstrip consumption, causing prices to plummet.

For now, as summer harvests continue to roll in, and a month before winter planting, no decisions are being made. “We’re in a holding pattern from here on out,” Mick says.

Not Barstow. Unlike most local farmers, he’s harvested none of his wheat. Even though the summer came on late, the majority of farmers have already begun harvesting. Once Barstow collects all his grain, he’ll sell it. Until then, he’s patient, which makes sense coming from a guy who farms a piece of land that’s been in his wife’s family for generations.

“First crop out of the ground was 1883,” he says, still moving the combine back and forth over his field. He speaks with affection about the Palouse’s seasons, and how they’re perfect for wheat — the wet springs and hot summers alleviate the need for irrigation.

But he knows the money game just as well. “One of the lessons I’ve learned,” Barstow says, “is you can’t guess the market.”