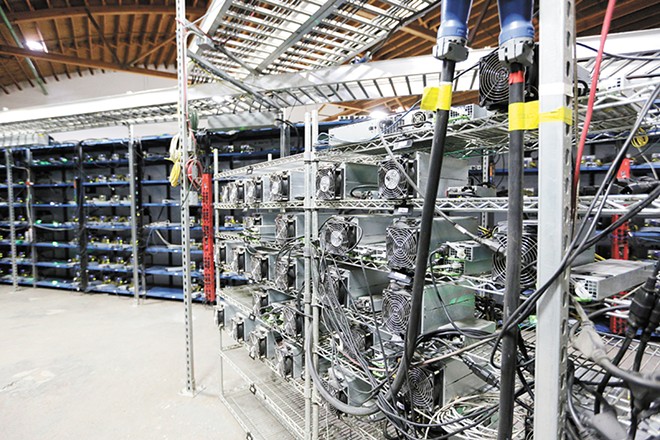 Young Kwak
Mining hardware at Malachi Salcido's Columbia Data Center in Wenatchee. Central Washington has been a prime location for bitcoin miners due to the cheap electricity.


San Francisco — Most big banks have tried to stay far away from the scandal-tainted virtual currency bitcoin.

But Goldman Sachs is bucking the risks and moving ahead with plans to set up what appears to be the first bitcoin trading operation at a Wall Street bank.

In a step that is likely to lend legitimacy to virtual currencies — and create new concerns for Goldman — the bank is about to begin using its own money to trade with clients in a variety of contracts linked to the price of bitcoin.

While Goldman will not initially be buying and selling actual bitcoins, a team at the bank is looking at going in that direction if it can get regulatory approval and figure out how to deal with the additional risks associated with holding the virtual currency.

Rana Yared, one of the Goldman executives overseeing the creation of the trading operation, said the bank is cleareyed about what it is getting itself into.

Over the last two years, however, a growing number of hedge funds and other large investors around the world have expressed an interest in virtual currencies.

Yared said a number of clients wanted to hold bitcoin as a valuable commodity, similar to gold, given the limited quantity of bitcoin that can ever be “mined” in a complex, virtual system set up nearly a decade ago.

Yared said the bank has received inquiries from hedge funds, as well as endowments and foundations that received virtual currency donations from newly minted bitcoin millionaires and didn’t know how to handle them.

The step comes with plenty of uncertainties. Bitcoin prices are primarily set on unregulated exchanges in other countries where few measures are in place to prevent market manipulation.

Goldman has been clearing trades for customers who wanted to buy and sell bitcoin futures on the Chicago Mercantile Exchange and the Chicago Board Options Exchange.

In the next few weeks Goldman will begin using its own money to trade bitcoin futures contracts on behalf of clients. It will also create its own, more flexible version of a future, which it will offer to clients.

Learn more about the bitcoin craze in Washington state in the Inlander's cover story from April 12, "Central Washington: epicenter of world-changing technology or ground zero for Bitcoin's epic fail"