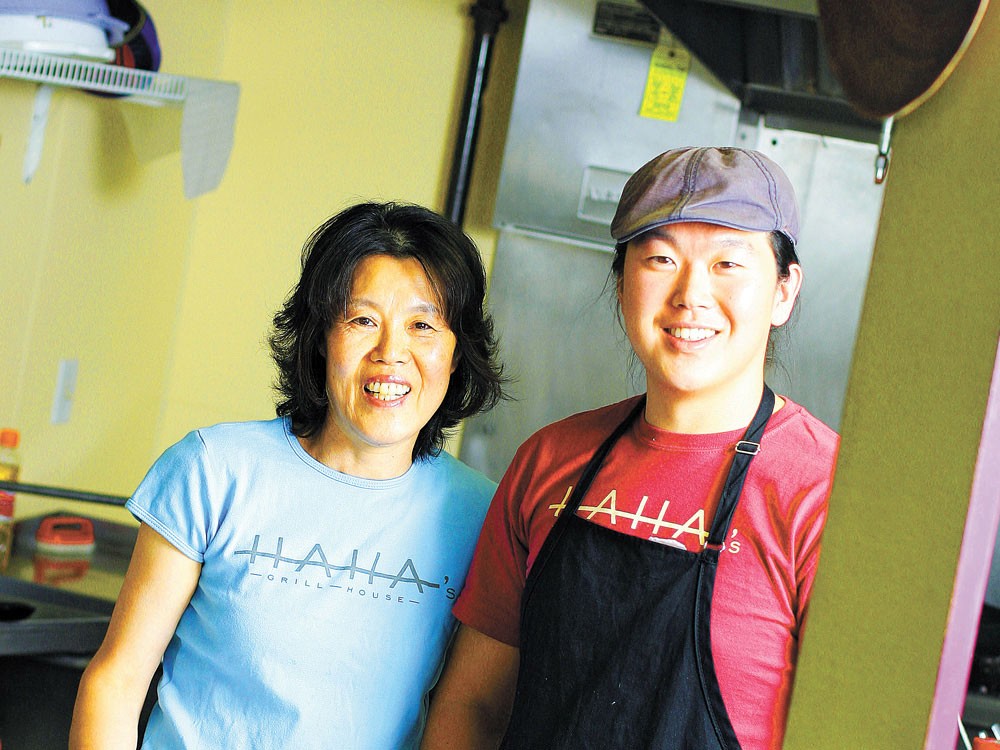 In 1979, a vagabond named Daniel Leen wrote and self-published a book called The Freighthopper’s Manual for North America, in which he describes the Hillyard trainyards as having “the feel of warmed-over death.”

Leen’s is a gritty (and dated) picture of the rough times weathered by Spokane’s railroad district, which — thanks to recent construction facelifts, community investment and eclectic entrepreneurship — is seeing a revival of its small-town USA glow.

Hillyard’s growing food pocket along Market Street harbors an off-the-radar melting pot of nosh spots, marking a low-profile collective defined by quirky variety, historic funkiness and a dogged character no other Spokane neighborhood can lay claim to. If this stretch of street isn’t on your radar, it should be.

KOREAN | On the outside, Ha Ha’s Grill House (2710 E. Garland Ave., two blocks off Market) looks like the other industrial buildings on this stretch of Garland. Then you open the door and are hit full in the face by a lovely atmosphere of green and yellow walls, dotted with various (mostly classical) record albums and contemporary décor.

Chef/owner John Ha plays with recipes inherited from his mother, Soon Ha, and only works with organic and natural ingredients. He describes Ha Ha’s fare as “Euro-Korean fusion.”

“I lived in Seattle for four years,” he said. “And we would go around to these hole-in-the-wall spots in neighborhoods like [this].” He sees Hillyard being a little Ballard (Seattle’s once scruffy, now chic fishing/ industrial neighborhood) in the making.

Ha’s Garland Burger ($8) satisfies like a burger should — minus the greasy gut-bomb coma. Its Korean-marinated patty comes perched on a fluffy Kaiser bun with cilantro aioli and cabbage coleslaw, and is teeth-sinkingly juicy, somehow without any pinkness to the meat.

The Fusion BBQ pulled-pork sandwich ($7) pays gourmet homage to the classic. It’s blanketed in caramelized onions for sweetness that play nicely off the pork rub, which contains hints of cinnamon. The whole thing struck a nice equilibrium of moisture and chewiness. We also devoured the tofu salad ($8/$10.30), tossed in a subtly sweet Korean dressing that complements the charred flavor of the silky-smooth tofu.

Their entrees — we suggest the spicy/smokey Daeji Bulgogi Korean marinated pork ($13) and their futuristic take on bibim bap ($11) — come with the traditional sides of various types of kimchi.

ARRIBA! | Spokane can brag about its huckleberry products, artichoke dips and bleu cheese burgers. Mexican food? We’re getting there. And Rincon Tapatio (3207 N. Market St.) is at the top of the family-owned-Mexican-restaurant ladder (taco trucks and De Leon/Tacos Tumbras get their own climbing apparatus), especially if you’re one of those people who differentiate between a taquito and flauta. We appreciate the menu’s variety (extended categories include “eggs,” “vegetarian” and “American”), the presentation of entrees (on hubcap-sized platters with bowl-like rims, so your rice, lettuce and beans don’t fall overboard when you’re shoveling) and the authentic atmosphere, like overhead sombrero lamps.


View Hillyard in a larger map

LUCK O’ THE IRISH | A stroll up the street is Spokane’s other favorite place to be rowdy, drink Guinness and eat delicious bar grub (besides O’Doherty’s): Whiskey Dick’s (3027 E. Liberty Ave.). Bartender Sandra Teal says the Irish Cadillac ($8.95) — shredded corned beef and roast beef, Swiss cheese and Russian dressing on dark rye with cream cheese and fresh onion (are you drooling yet?) — is the thing to try, and bartender Justin Ross Hale opts for the sweet ’n’ spicy chicken salad ($7.95) because “it’s healthy and still has some zing to it.”

ITALIAN-AMERICANA | It’s hard to describe the sheer comedic euphoria incited by the awesomeness of the sign for Tony Ferraro’s Burgers & Italian Bistro (3547 N. Market St.), which features a triumphant unification of the Italian and American flags.

Formerly the Steer Inn (the awning still bears the bovine insignia), Ferraro weds a drive-thru business model with sit-down, home-cooked dining, and says his penne ($5) is the best in town.

CHINESE | On a sleepy side street off Market is the Red Dragon (3011 E. Diamond Ave.), which, situated in a 1913 brick building painted fireengine red, is one of those niche jewels you discover when you’re lost. This chill nook opened in December 2009, has a sleek full bar and bistro-ish interior.

“It’s amazing how tight-knit the community is,” says waitress Chelsea Haynes, who suggests trying the Green-Eyed Angel ($5.25; fresh lime, gin and orange liqueur muddled and topped with cooling apple soda). “We’ve had a great response from the whole neighborhood.”

The hand-folded crab wontons with cream cheese ($4.24/$8) are fried morsels of joy, and the general’s chicken ($10) gives other take-outs a serious run for their money. And talk about cultural fusion: Red Dragon features live belly dancing (!?) the second Saturday of every month.

RANCH GRUB | At home among Hillyard’s antique stores is the adorable Outlaw Café (5012 N. Market St.), a breakfast/lunch venue that’s family-run in the 1907 Nebraska building (the second floor of which used to be a brothel, according to the menu).

We love the farmhouse feel and the speckled blue enamelware Outlaw serves its coffee in (the kind you use when you go camping). Proprietor Lynn Moore says the cowboy bean soup, homemade quiche and loaded Hardin patty melt ($8.95) are house favorites.