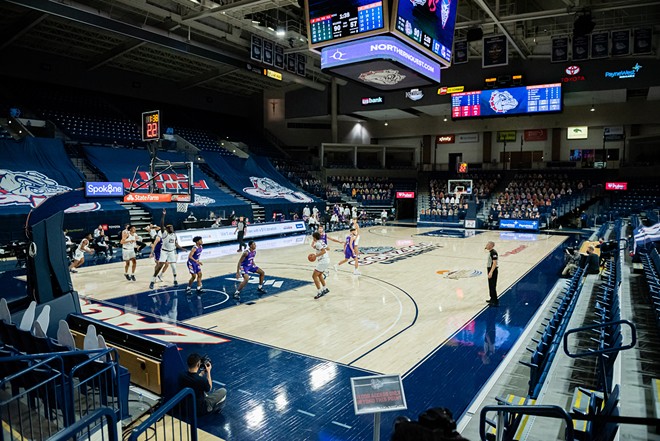 Erick Doxey
The Zags will try to take their domination in front of sparse crowds along with them to Vegas for the WCC tournament.

Gonzaga just wrapped up an undefeated regular season, a first in the program’s history. The Zags are now one of just 29 teams ever to enter postseason play with zero losses.

Before they can become just the 20th team to enter the NCAA Tournament with an unblemished record, they’ll have to navigate through the West Coast Conference Tournament in Las Vegas. What stands between the Zags and that fate? Nine teams that are looking to upend history.

Before we go any further, let’s define what we’re talking about. Between now and Selection Sunday the Zags will play a maximum of two games. As the top seed in the conference tournament, Gonzaga has earned a bye into the tournament semifinals. Two wins, and they’re WCC Tournament champions for the 19th time in program history.

The tournament tips off this Thursday, but the Zags won’t take the court until next Monday.
Between then and now, six games are scheduled to take place. The teams seeded 7 through 10 get things started on Thursday. Teams 5 and 6 enter the mix on Friday with the 3 and 4 seeds waiting until Saturday’s quarterfinal round to join in. Gonzaga, the 1 seed, and BYU, the 2 seed, earned a spot in Monday’s semifinal round by posting the two best records in conference play. The rest of the bracket isn’t exactly sorted by record, though.

Pauses, postponements and cancellations caused by the coronavirus led to a wildly unbalanced schedule during league play. Gonzaga managed to play 15 games this season, most in the league, but still less than the 16 it was supposed to play. San Diego and Santa Clara, on the other hand, took the court just nine times in conference play. Normally, each team plays every other league team at least once in the season, and plays most teams twice. This year, some teams didn’t get a chance to play at all. That led to the league abandoning the traditional format of seeding by the league standings. Instead, the WCC worked with statistician Ken Pomeroy to create a metric that weighs a team’s record against the schedule it’s been able to play.

Without question, the biggest beneficiary of this year’s system is Gonzaga’s arch-rival, the Saint Mary’s Gaels. Despite having a losing record in conference, the 4-6 Gaels were given the 4 seed in the tournament. With that comes a bye into the quarterfinal round. A win there, and the Gaels are set to square off against Gonzaga next Monday.

It’s important to remember, in this absurd pandemic season, that they’re "set to square off." It’s not guaranteed. Portland, which finished 0-11 in league play, dead last in the standings, is scheduled to take the court this Thursday against Santa Clara. Last Thursday, just hours before they were set to take on San Diego, Portland announced it would be cancelling its final two regular season games due to positive coronavirus tests within the program. Their ability to participate in the conference tournament was up in the air, and they made a point to say so in their press release.

Turns out, it was a false positive. The Pilots are, for now, set to play down in Vegas. It didn’t end their season, but the false positive did take two games away. Another one, false or not, will be a season ender. That’s the case for basically every team except BYU and Gonzaga, who are all but assured of a spot in the NCAA Tournament.

For now, Gonzaga’s got a week off. A week to prepare for postseason play and continue avoiding positive tests, false or otherwise.

UP NEXT
At Orleans Arena in Las Vegas for the WCC Tournament, the 1 seed Zags will take on either 9 seed San Diego, 8 seed San Francisco, 5 seed LMU or 4 seed Saint Mary's, on Monday, March 8, at 6 p.m. on ESPN.