The ultimate goal for every team is to end the season with a win. For the Gonzaga Bulldogs that's exactly what happened, except nobody wanted it to be this way.

When the Zags wrapped up a dominant win over Saint Mary's in the West Coast Conference Tournament championship March 10, the excitement level went through the roof. Preseason question marks had been answered and midseason adversity overcome. The Zags owned a gaudy 31-2 record — only five times in program history had the Zags won more games in a season — and they weren't even done yet.

Of course, that's what we thought at the time.

Two days later, on March 12, the NCAA Tournament was canceled. It took less than 48 hours for all of the air to drain out of one of the more exciting and improbable seasons in Gonzaga history.

It was a season that opened with a tempered optimism. The Zags were ranked eighth in the preseason AP Poll, but would have to replace four starters from last year's team. Surely, there would be some bumps in the road. But there weren't. By the seventh week of the season Gonzaga sat atop the AP Poll; the Zags were the No. 1 team in the country once again.

The Zags avoided the early season hiccups, but they never really came together until the very end. Killian Tillie missed the first games of the year due to injury, and just as he came into the fold Anton Watson began a slow, painful and premature exit due to repeated shoulder dislocations. It took until mid-February for the Zags to solidify as fully healthy a roster as possible. With it, they won the WCC regular season title and took home the conference tournament trophy as well.

They spent most of the season rating as the most efficient offensive team in the country, a title they held at season's end by averaging 1.20 points per possession over the year. A suspect defense had steadily improved as well, and the team rounded into form at exactly the right time.

Bracket prognosticators expected the Zags would find themselves as the one-seed in the West Region of the NCAA Tournament. That meant a trip a few blocks from campus to Spokane Arena for the first two rounds of March Madness, then down to Los Angeles for the Sweet Sixteen and Elite Eight. An early-April weekend in Atlanta for the Final Four seemed almost assured.

Now, we'll never know what would have happened with this team. It's more maddening than the Madness itself. Seasons this successful are now commonplace at Gonzaga, but they're not guaranteed. This could have been the year, and we won't get to see it.

That's not to say this team didn't provide countless moments, though. The Zags always do, so maybe this is just recency bias at work, but this team may have provided more than any who came before, even if the ultimate one was lost to a pandemic.

On the first night of the year Zag fans were apprehensive. As had been the case the season before, now-senior Tillie, arguably the team's best player, would miss the opening game due to injury. But in his stead was Watson, a freshman who had made his way over from Gonzaga Prep. The Zags have built a reputation for finding elite international talent, like Tillie, and loading up on it every single year. In Watson, though, they had the opposite. A Spokane kid starting for Spokane's team for the first time since David Stockton way back on March 23, 2015.

Watson made way for Tillie upon his return, but we'll never lose that moment. Flash forward to the very end of the season, to the very last on-court moment of the year, and you see Tillie making way for another Zag. 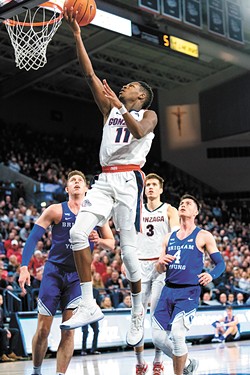 As champions always do, the Zags cut down the net at the WCC Tournament. Tillie, a senior with no idea his Gonzaga career had just come to an end, climbed the ladder last. As he removed the net from the rim he gestured for a teammate. Joel Ayayi walked over to the base of the ladder and Tillie, the 2018 WCC Tournament MVP, crowned Ayayi, the 2020 WCC Tournament MVP, by placing the net over his head and draping it around his neck.

An all-time Gonzaga great anointing the next generation. It was powerful and heartfelt at the time, and even more so now, knowing Tillie's career has ended abruptly.

The team gave us very public moments, like on senior night when manager Mac Graff ditched his wheelchair and walked to center court during a pre-game celebration. They gave us more private ones, too. Graduate transfer guard Admon Gilder came to Spokane from Texas A&M for his final collegiate season. It was a sacrifice, though, as Gilder had to leave behind his family. On Feb. 27 against San Diego, when Gilder brought down the house with a thunderous dunk, he pointed into the crowd. It wasn't a gesture to the fans generally, it was to his 4-year-old daughter, Kailey, who was finally reunited with her father.

After the game, in front of an empty arena, the two played together with a basketball on the court.

Every season brings moments like this, which show Gonzaga is about more than just winning games — though they're normally overshadowed by the winning Gonzaga tends to do in March. This year though, that's not happening.

The tournament can be taken away, but what this team gave us can't. We have to wait another year for the big moment, but all the little moments from this season might well be worth even more. ♦