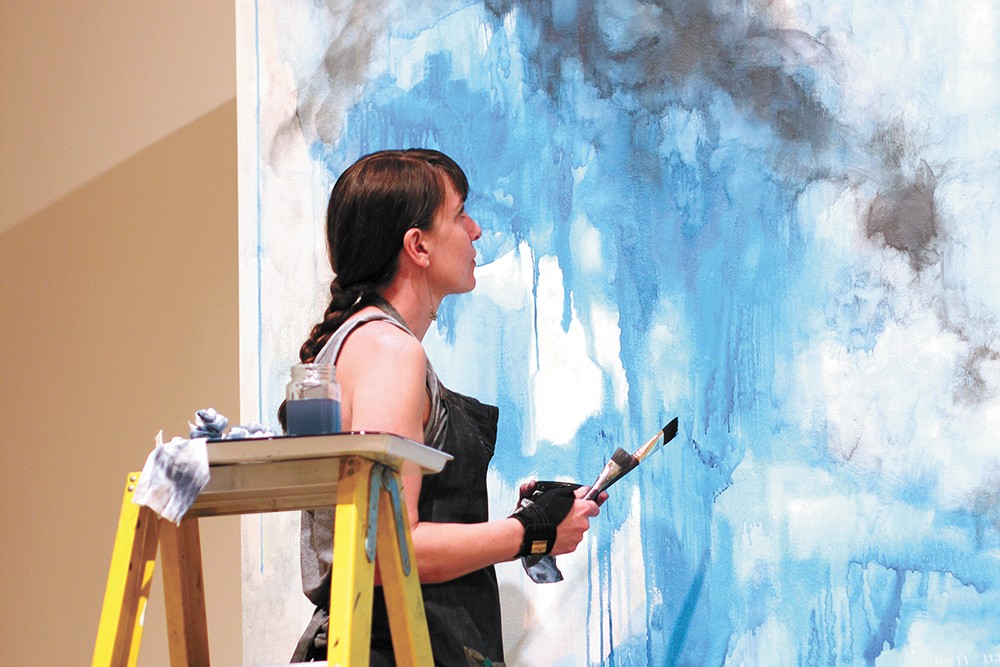 Gonzaga University's Drawn to the Wall exhibition at the Jundt Art Museum upends the traditional gallery experience for artists and audience alike. The triennial art show is inspired by a 1995 exhibition whereby artist Jim Dine filled a German gallery with drawings — not framed and hanging on the walls, but using the walls as a drawing surface.

Drawn to the Wall challenges artists to push not only the boundaries of the "page," but also their own artmaking. The Jundt's Curator of Education Karen Kaiser chooses the five participating local artists.

"There isn't a specific criteria, except I like to mix up age groups and techniques and I have to really like your work," says Kaiser.

The premise has been the same since the Jundt first developed Drawn in 1998. Not only must each artist incorporate the 8-by-11-foot wall into their artmaking, they must work in a compressed timeframe — less than two weeks — and surrounded by the other participating artists. The result is always a bit of a surprise, sometimes to the artists themselves.

For artist Christine Kimball, who is known for her large abstract landscape paintings and drawings, working large is not that unusual. The 74-year-old artist used chalk pastels to create a piece she says is reminiscent of an 18-foot-long painting inspired by a hotel she visited in Japan.

What was unusual, says Kimball, who earned her Bachelor of Fine Arts at Fort Wright College, was sorting through ideas — she had a lot of them — until she regrouped to focus on color and mark-making. Halfway through the allotted time, Kimball was still adjusting her design, trusting her intuition honed from more than 40 years working in art.

Whitworth University painting instructor Robert Fifield focused on color and shape in the design he developed and from which he would not allow himself to deviate. I sometimes have to "get out of my own way," he explained, and just see the original idea through without getting distracted by other possible solutions.

Fifield employed the computer to work out the mathematics of his design, adjusting for the unexpected extra inch in the 11-foot wall's height. "It's like designing a flag," he says.

His wall, which resembles a quilt pattern, is also an optical illusion due to his choice of colors: two similar values of pink, two similar values of light blue, and white. It's also a scaled-up variation on his recent series of quilt-like work and other paintings that parlay shape, color and pattern into abstract compositions.

McCann ended up securing Masonite boards to the wall and added lightweight pieces he made in his studio, disassembling it at least once to reposition the forms so the composition was symmetrically balanced.

Like McCann, Jamie Nadherny did a lot of fabrication elsewhere. In addition to a custom rack that sits atop her wall, Nadherny spent an estimated 1,000 hours dipping flower heads in wax — roses, carnations, hydrangea, snapdragons, tulips, orchids, lilies, daisies, plus bearded iris from her garden — to preserve their form. She used a 4-inch doll needle to string them into garlands so they could be suspended from the rack.

Set against a black-and-white charcoal drawing of rocks, the suspended flowers suggest both a waterfall and icicles. "Conceptually what I'm thinking about is the power of water," says Nadherny, who teaches at both Gonzaga and Spokane Falls Community College. "Water is life."

The flowers, which were mostly donated, might be associated with celebration, but also funerals. Although no longer alive, the beeswax preserves them, much like mummification, and the work also refers to bees, pollination and the life cycle of plants. That sense of coming full circle intrigues her, says Nadherny, who also goes by the name Lou Lou Pink.

After the first meeting, Erickson says, when the artists converge to talk about their ideas and see the walls where they'll work, she went home and measured her studio, which — floor to ceiling — only measured 10 feet.

"So I bought some really big brushes," she says, laughing.

Erickson also typically paints in thin washes of paint on a smooth board, augmenting her painting with small pencil marks that resemble numbers. She experimented painting directly on a sheetrocked, painted interior wall and was surprised to find she liked the surface quality.

Another surprise: being surrounded by other artists was also kind of fun, she says. "At first, it was giving each other encouragement."

Regardless of their chosen media, background or content in this year's exhibition, all five artists felt the pressure of Drawn to the Wall's unique, time-sensitive format.

Erickson sees it as a mixed blessing. "You don't have time for self-doubt," she says. ♦