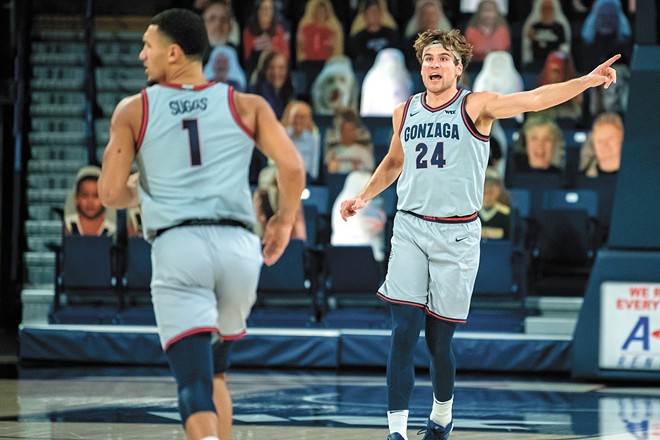 Erick Doxey
Up next for the Zags, a trip to Indiana for March Madness.

Gonzaga played BYU twice last night in Las Vegas. The women’s team took on the Cougars first, and then men went against them in the nightcap. It didn’t look good for either early on.

When the final buzzer sounded in each game, though, it was the Zags who found themselves on top.

Two seasons ago in the WCC Tournament at Orleans Arena, then-sophomore Jill Townsend broke her leg in a semifinal win against Saint Mary’s. She recovered, and in her junior year was named WCC Player of the Year. This year she didn’t win that award, but she won the conference tournament’s equivalent thanks to her end-of-game heroics.

Battling food poisoning, like many of her teammates, the starting-lineup stalwart Townsend was limited to 18 minutes off the bench. She scored just two points, but they were the biggest points of the tournament.

With 0.6 seconds remaining, down by one, Gonzaga was inbounding under its own basket. Fellow senior Jenn Wirth, this year’s WCC Player of the Year, set a screen in the paint to get Townsend open. It worked, kind of. Wirth took out Townsend’s defender but BYU center Sara Hamson rotated over almost immediately. With a 6-foot-7 defender draped over her, the 5-foot-11 Townsend caught a bounce pass and quickly fired it up into the basket over the long, outstretched arm of Hamson as the buzzer sounded.

“It was like a blink of an eye,” Townsend said. “I’m kind of puzzled how I got it around her. Her hand was up and I couldn’t really see the hoop. I had no idea if I got it off in time.”

As the officials reviewed the tape to decide if the shot would count, Townsend made her way off the court and towards a garbage can. She had food poisoning, after all. Turns out, the cure might be winning, because when the officials announced that yes, Townsend’s shot counted, and yes, Gonzaga had won the game, she and the rest of the players raced back onto the court overjoyed.

With three starters hampered by a stomach bug, Gonzaga struggled but also showed why they’re the No. 16-ranked team in the country, entering the NCAA Tournament with 23 wins to just three losses. Role players like freshman Yvonne Ejim stepped up. She led all scorers with 13 points, and her nine rebounds were the most among the Zags. Depth matters, especially in March.

The Gonzaga women now head to the NCAA Tournament for the 12th time in program history and fifth time under head coach Lisa Fortier — it would be sixth under Fortier, had last season’s tournament not been called off due to COVID-19. They’re also an early frontrunner to win best buzzer beater of March. 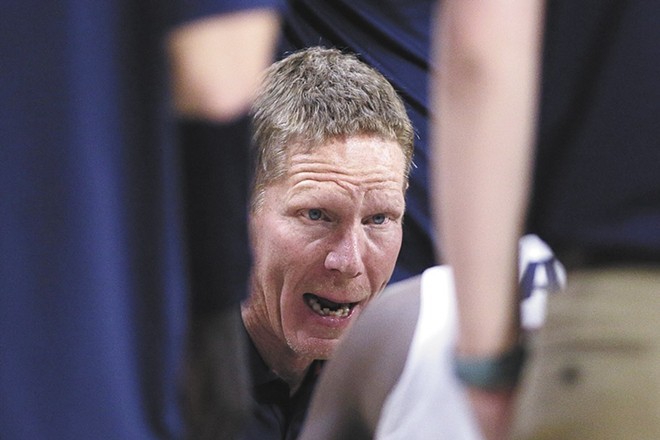 Young Kwak
Zags coach Mark Few has his team on the verge of history.

The Zags entered Tuesday night’s WCC Tournament final with a sparkling 25-0 record. They’d won 22 straight games by double-digits, including two against the BYU Cougars, who they’d face off against for the trophy. Gonzaga, top seed in the tournament and No. 1 in the country, against BYU, a team on the outside, though just barely, of the AP Top 25. It would be yet another blowout win, right?

In the end, kind of, but it sure didn’t feel that way throughout.

BYU shot an insane 68 percent from the field in the first half to go with an even better 69 percent from three point range. Corey Kispert, the WCC Player of the Year, went just 1 of 6 for the Zags in the first half. With less than a minute to play before half, BYU led by 14 points. It was Gonzaga’s largest deficit of the season.

The Cougars played as perfect a half of basketball as any team has against Gonzaga in recent memory. The Zags weren’t slouches by any stretch. They shot 51 percent from the field and made six of 13 from deep in the opening 20 minutes. Yet they trailed by double-digits at the break.

But then Mark Few got his team going in the locker room at halftime.

Gonzaga stormed back behind a red-hot Kispert, who finally found his shot from distance. Barely six minutes into the second half the Zags had erased BYU’s lead. But the Cougars didn’t go away, and promptly pulled back out to a nine point advantage. Gonzaga answered, with a 12-0 run to reclaim the lead, but BYU hung around.

That is, until freshman Jalen Suggs cemented his case as WCC Tournament Most Outstanding Player. Suggs scored eight of the Zags’ final 15 points over the last four minutes of the game to help Gonzaga to its 23rd consecutive double-digit win, 88-78.

Gonzaga will enter the NCAA Tournament undefeated for the first time in program history. They’re the first team to do so since Kentucky in 2015, when the Wildcats rode a perfect record all the way to the Final Four before falling to Wisconsin. Overall, they’re just the 20th team in history to enter the big dance unblemished.

Here’s when history takes an unfriendly turn, however. There have been a handful of teams in recent decades to enter the tournament undefeated, but none have made it all the way through to lift the national championship trophy without a loss since the Indiana Hoosiers in 1976.

Gonzaga’s goal all season long has been to win the national championship. The undefeated season stuff, that was just a bonus. But now, from here on out, they go hand in hand. Gonzaga can’t win it all without doing so as an undefeated team. Lose any game, just one, and the season ends. As it stands now, though, all Gonzaga’s done is win. They’ve yet to prove an ability to lose. If that doesn’t change between now and early April, the title of national champions in 2021 is theirs.