Everyone is invited to dance, drum and learn about Native American culture at the annual Gathering at the Falls Powwow in Riverfront Park 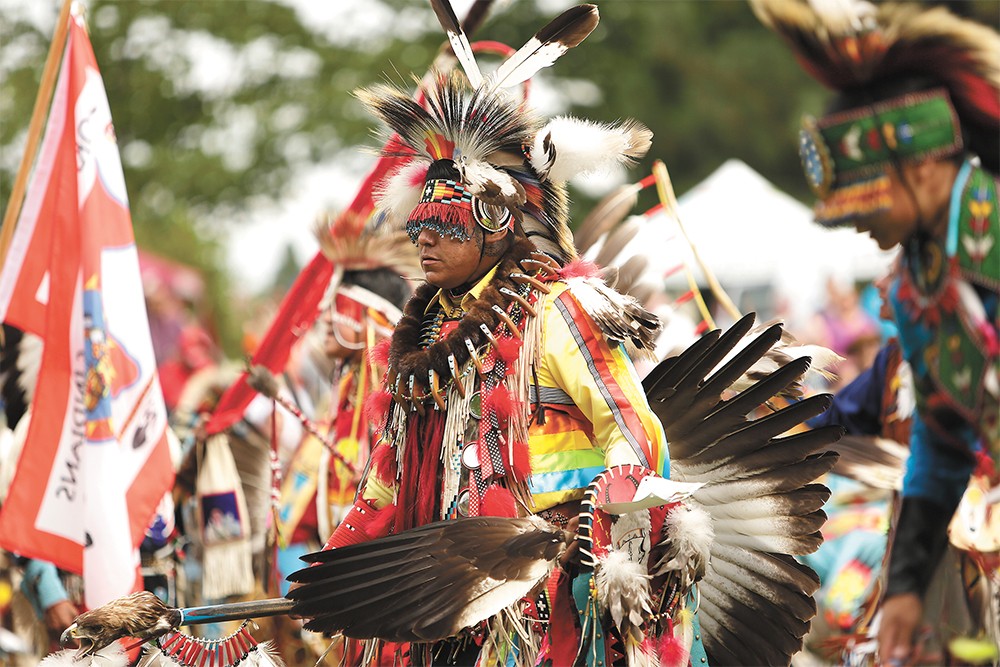 Young Kwak
Roberto Vargas dances during the grand entry at last year's Gathering at the Falls.

The dancing, the singing and the sense of community

experienced at the Gathering at the Falls Powwow mark a way to spend time with old friends, meet new people and, in many ways, serve as a form of self-care, says Jerry Crowshoe, one of the chairs for the annual event.

"It's a way to put all your woes aside, enjoy yourself and take care of yourself," Crowshoe says. "It's good medicine for people to come witness it and be part of it."

Thousands of people are expected to gather at Riverfront Park starting Friday evening for powwow events that run through the weekend, from grand entry dance competitions Friday and Saturday nights to the youth powwow and family day on Sunday afternoon.

"A powwow is kind of like a rodeo circuit," says Grace Branstetter, an event spokeswoman. "There are a lot of professional dancers who travel around the country, and even the world, to participate in indigenous events and contests."

While many will compete for cash and other prizes, all people are encouraged to attend and participate, Crowshoe says. There are prizes specifically for people who've never been to a powwow before.

"That's one of the things we hope for, is celebrating diversity," he says. "This is public. It's for all nations, whether you're Native American or not, to come dance."

The free celebration honors the area and traditions of many tribes who gathered at the river to hunt, fish and trade. And in part, it offers connection for people who live here who are from various Native American nations spread throughout Canada, Washington, Idaho, Montana, the Dakotas and much of the rest of the western U.S., Crowshoe says.

"A lot of tribes have their hometown powwows," Crowshoe says. "But for those who live away from the reservation, we want to have this so they can have a powwow."

Young Kwak
Everyone is welcome to the powwow in Riverfront Park this weekend for song, dance and cultural celebration.

Each year, the organizers of Gathering at the Falls reach out

to indigenous people around the world; typically, people from all over the U.S. and Canada attend, Branstetter says. The organizers of the 26-year-old event would like for it to someday be as large as the Gathering of Nations, which is billed as the largest powwow in North America and takes place in New Mexico each year.

"We're trying to be the Gathering of Nations up here in Spokane. We'd like to bring that size of an event to our area," Branstetter says. "We have so many tribes localized here and in Canada, and we have just not tapped into that."

The Gathering of Nations sees tens of thousands of people attend each year; Spokane's Gathering at the Falls has gotten close to 10,000, though thick smoke from regional fires kept many people from attending the past few years.

Crowshoe, who grew up in Spokane, is a member of the Piikani Nation, part of the Blackfoot Confederacy. Participants and staff this year are expected to come from all over, including the Colville Confederated Tribes, Spokane, Coeur d'Alene, and Kalispel tribes, Ktunaxa Nation, Assiniboine-Cree and Blackfeet Nation, among others.

This year, there will be a special performance Saturday evening by Aztec dancers. If nothing else, people will definitely want to see the grand entry on Saturday at 7 pm, Crowshoe says.

"It's basically prime time," he says. "I'd say it's where you see the culmination of everything. It's the last and final grand entry of the weekend. We put all our chips onto that one night."

In addition to seeing some of the best dancers in full regalia,

Spokane Mayor David Condon is scheduled to be there, as are local law enforcement, veterans and others who will be invited to participate.

"You'll see some of the best songs and dancing, and the location is beautiful," Crowshoe says. "It's an energy I don't think you can experience anywhere else."

Other events spread throughout the weekend will include a naming ceremony on Friday night, where someone will be honored by their family and receive their new name. An Indian art market will be inside River Park Square all day Saturday, with crafts and artwork for sale that you'd never typically find around Spokane, Crowshoe says. Sunday is the fifth annual Youth Powwow and Family Fun Day.

From noon to 4 pm Sunday, all youth and families are invited to attend and sing, drum and dance. Fun competitions for the kids will include categories like who can dance with the "Fastest Feet" and "Biggest Smile," and they'll have chances to get candy, toys and other giveaways, Crowshoe says. Also, fun characters from popular movies might make an appearance, from Lego Batman to the Minions.

"We try to get kids who've never been to a powwow to come out and validate that positive experience with someone else's culture," he says. "We hope everybody comes up and has a good time, and just celebrates the wonderful history and culture of Spokane." ♦