Mayor Condon continues to shake up City Hall and outsource certain services. But will it work? 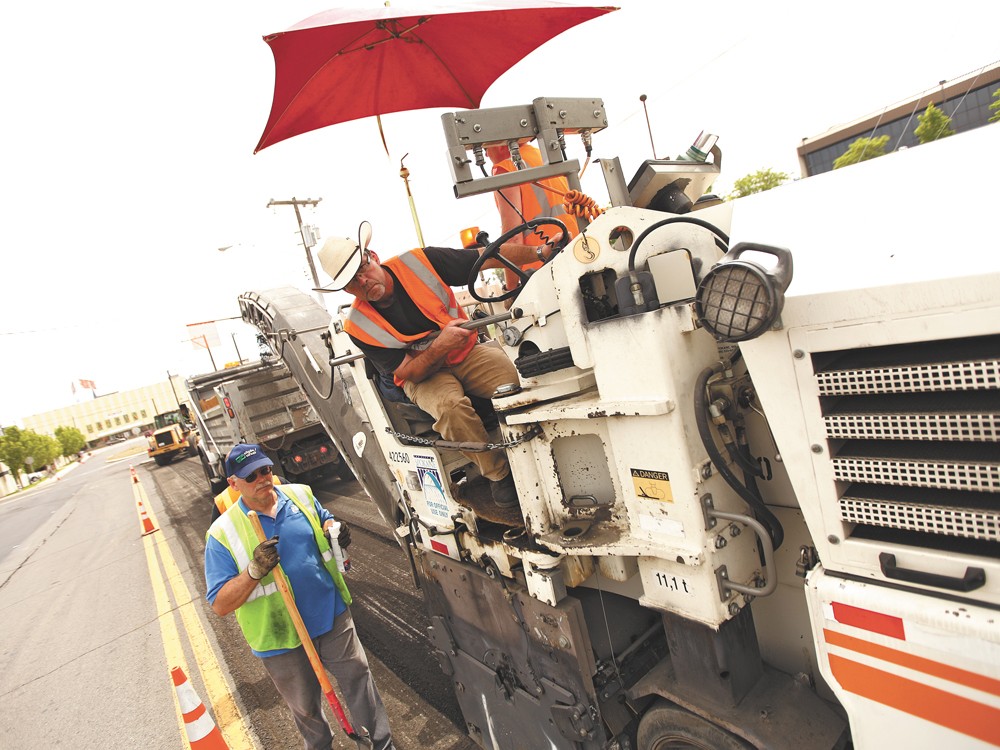 There was a point in last week’s press conference when Mayor David Condon looked absolutely gleeful. In the middle of announcing more personnel changes and news that half a dozen city departments were being dismantled or consolidated, the mayor paused, smiled and said: “It continues.”

Indeed. As the mayor continues to propose reforms to city government services and continues to wrestle with projected budget deficits, he’s making waves across City Hall. It’s an experiment on two levels: whether Condon can reform Spokane city government to what he sees as a more efficient model, and whether Lilac City voters will find a true “strong mayor” to their liking.

The changes Condon announced last week aim to create what he described as a more service-oriented government. Among the changes: The Street Department would move into the Business and Developer Services Division; the city’s utilities (water, wastewater, and solid waste departments, along with fleet services) would all be centralized into one department; the Small Business and Development Services Department would fold into the Planning Department.

That comes atop the elimination last month of the city’s real-estate office — essentially two full-time employees who oversaw the city’s 1,600 separate pieces of property. Condon says the work will be done in-house or contracted out. Two other departments — Weights and Measures and the Arts Department, each with one full-time employee — are also facing the possibility of extinction in this year’s budget. And earlier in the year, the Condon administration decided to contract out street repair work instead of hiring city workers — a decision some expect to result in even less roadwork actually getting done.

Opinions differ widely on what this shake-up means for the future of the city.

“There’s a bent in our elected officials who got elected in this last round toward private industry versus government services,” says City Council President Ben Stuckart.

Case in point, Stuckart says, is the streets funding.

“Forty-five percent of the work will be done this year,” Stuckart says, citing a projection by the Citizen’s Transportation Advisory Board. “Versus if we had used government workers who are experts in street repair and maintenance, we would have gotten 100 percent of the work done.”

The city disputes those numbers. Spokeswoman Marlene Feist says if the city finishes its scheduled projects it will complete more than the recommended projects for 2012.

“When the administration makes arbitrary decisions to eliminate departments in the middle of the year, that goes against what council does on the budget,” Stuckart says.

The council president also defends the need for both Weights and Measures and the City Arts Department as essential city services.

When you ask Arts Director Karen Mobley what services she provides, she gives you a checklist of tangible tasks. Among other things, Mobley oversees the city’s gallery, works on projects like the sculpture walk downtown, administers classes for artists and serves as a link for artists, musicians and patrons.

“At this point it seems, for a lack of the better word, ‘fluid,’” Mobley says, referring to future of the Arts Department. “We’ve been in this place before. I kind of feel like the cat that’s had seven-and-a-half lives.”

Mobley worries how the Art Department’s work could be continued after losing its revenue. The worst-case scenario is that, if she’s laid off, “volunteers and the alternative structure [get] tangled up with themselves” and can’t deliver services.

She says this is unlikely, because she the feels the volunteer members are competent. But having a volunteer governing body fail wouldn’t be unprecedented. The Davenport Arts District Board, the group that oversaw arts in the downtown core, disbanded last year after losing direction.

The mayor said last week he’s using two cities as examples for his governing philosophy: Louisville, Ky., and Indianapolis. The latter has been outsourcing government services for a long time, according to Jason Mercier.

Mercier, director of the Center for Government Reform at the Washington Policy Center, a nonpartisan think tank, says outsourcing city functions is nothing new.

“Government is a facilitator of services, it’s not necessarily to be an employer,” he says. “Obviously people that are being employed by government don’t want to see their work going somewhere.”

Successful outsourcing depends more on how it’s done rather than the types of services affected, Mercier says. Loosely written contracts can let poorly performing contractors get away with shoddy work.

“There are good contracts and bad contracts, depending on how they’re written,” he says. “Write them on a performance basis, have penalties in there [for poor service].”

Some cities have taken the outsourcing philosophy and run with it. Weston, Fla., a suburb of Miami, has only nine city employees for a city of 65,000.

Some consolidation, like combining the city’s Community Development and Human Services departments, makes sense to Arlene Patton, the chair of the Spokane Regional Homeless Governance Council. That’s because the departments currently distribute money to similar programs — like low-income housing and food assistance — without communicating with each other, according to Patton.

“There’s not a lot of coordination between them,” Patton says.

“I think it’s going to help us to use the money more effectively and efficiently.”

“I think he’s trying to consolidate too much,” Apple says. “It almost sounds like 12 departments down to four.”

Apple, who is currently running for a House seat in the 3rd Legislative District, says he does agree with Condon’s decision to axe the real-estate office but that outsourcing street work will prove more expensive in the long run. “Hindsight is 20-20,” he says. “He’ll figure that out.”

Officials, in fact, are already wrestling over the practices of the firm that the city contracts with for risk management services. Chief Financial Officer Gavin Cooley has ordered an examination of the city’s relationship with Alternative Service Concepts after hearing complaints over some aggressive money-saving practices. The company’s tenure goes back 10 years, long predating Condon, but its future relationship with city could be one more argument for or against contracted

Finally somebody managed to fulfill the title 'strong mayor'