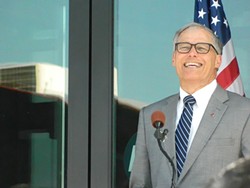 PROVIDENCE, R.I. — Gov. Jay Inslee of Washington, a Democrat, huddled with the leaders of Mexico and Canada in the space of 48 hours this spring, racing to Mexico City from Seattle for back-to-back discussions on climate change and trade

Gov. Asa Hutchinson of Arkansas, a Republican, toured Europe last month to deliver what he called a “reassuring” message to business leaders, declaring that Americans would not “retreat” from international commerce.

And Gov. Pete Ricketts of Nebraska, a Republican, recently announced he would visit Canada this summer with a message of thanks — for the North American Free Trade Agreement, a pact that President Donald Trump has harshly criticized and says he intends to renegotiate.

In ordinary times, most U.S. governors tend to avoid international exploits, boasting of their consuming interest in balancing budgets and operating the machinery of state government. When they venture abroad, it is mainly to hawk products manufactured in their states.

But under the Trump administration, that has begun to change: Leadership at the state level has taken on an increasingly global dimension, as governors assert themselves in areas where they view Trump as abandoning the typical priorities of the federal government. They have forged partnerships across and party lines to offset Trump administration policies they see as harmful to their constituencies.

Unsettled by the president’s skepticism of foreign trade, governors have made newly pointed appeals to international businesses and consumers, at times gently rebuking the White House for presenting an inhospitable face to the world.

After Trump rejected the Paris climate agreement, a dozen governors announced a state-level coalition to carry out the pact in a partial form, with Gov. Jerry Brown of California, a Democrat, taking a leading role and traveling to China for a meeting on climate with President Xi Jinping.

The turning outward of U.S. governors was on prominent display at the National Governors Association retreat in last week. There, Prime Minister Justin Trudeau of Canada spoke Friday, the first foreign leader to address the group. Gov. Terry McAuliffe of Virginia, a Democrat who is chairman of the governors association, said representatives were present from a number of other countries, including China, Japan, and Vietnam.

In addition, aides to a number of governors, including Brown and Inslee, conferred privately to plan for a climate conference in Bonn, Germany. Trudeau framed his remarks to the group as a tribute to the relationship between the United States and Canada, highlighting shared goals on climate and national security, and urging governors not to support a “race to the bottom” in the form of trade protectionism.

Trump’s determination to overhaul NAFTA and his rejection of the Trans-Pacific Partnership, a regional deal negotiated by the Obama administration, have rattled governors of both major parties in states that rely on commerce with Canada and Mexico, and across Asia.