Grading on a Different Curve

With its surprisingly smart script, Bad Teacher is a send-up of typical romantic comedies. 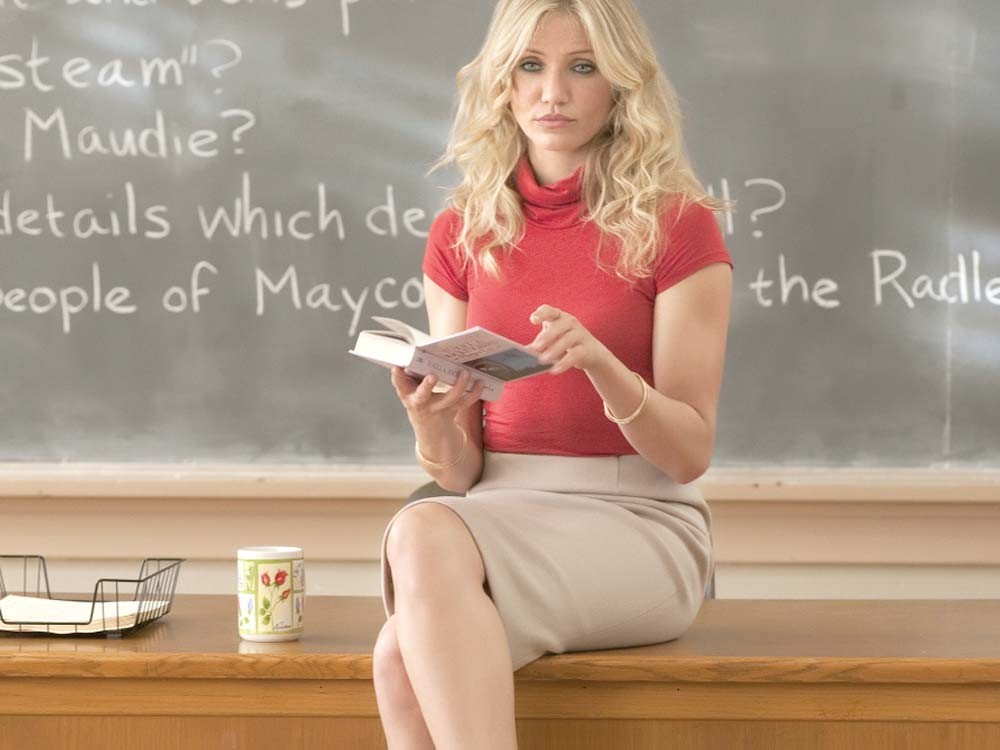 Teacher's being naughty. But the movie she's in is good.

It doesn’t descend to the level of the so-evil-it’s-genius Bad Santa (which it clearly hopes to invoke with its title alone), but Bad Teacher is a refreshing breath of justso-wrongness in today’s movie milieu. How’s that? The gross-out comedy genre is all about piling degradation onto supposedly sympathetic protagonists, inviting us to laugh at those characters ... until the sharp about-face that invariably occurs in the third act, when suddenly the tone turns sappy and we are expected to care about the fates of the characters we’ve been ridiculing.

But the small wonder of Bad Teacher is that director Jake Kasdan never invites us to feel sorry for Cameron Diaz’s unrepentantly terrible educator. On a good day, she sleeps through class and berates her students; on a bad day ... well, no spoilers. She’s a hilariously awful person. We can laugh at her precisely because we aren’t expected to see her — or her hapless students — as realistic. (Of course, this wouldn’t be funny at all if this were a real school, a real teacher and real students. Our educational system is enough of a disaster.) But Bad Teacher is a live-action cartoon, and Kasdan intends it that way.

When some of its characters attempt to avoid humiliation, Bad Teacher does have its yucky bits. But this movie isn’t trying to out-gross the gross-outs. (Anyone expecting a Judd Apatow-style barrage of disgustingness will be disappointed.) Instead, Bad Teacher is a parody of romantic comedies.

Halsey wins some of what she wants, and in a crude, barbed way that holds up the traditional rom-com itself for ridicule (which is a good thing indeed). Instead of asking us to see the lovey-dovey, soft-focus, sigh-inducing romance in a woman who chases down the man of her dreams, what we get instead is the cold, hard reality of unromantic game-playing. The joke is on the audience, too: If Elizabeth Halsey is laughable, shouldn’t we see most rom-com heroines the same way?

Screenwriters Gene Stupnitsky and Lee Eisenberg failed miserably with their desperately unfunny “comedy” Year One, but their Bad Teacher script is an unexpectedly smart pleasure. The sneaky success of the film is, however, mostly down to Kasdan, who also made the brilliant Walk Hard: The Dewey Cox Story. He is rare among today’s American filmmakers in being able to maintain a consistent comedic tone of not-so-dumb crassness. His reward should be a big gold star and extra cookies at snack time.