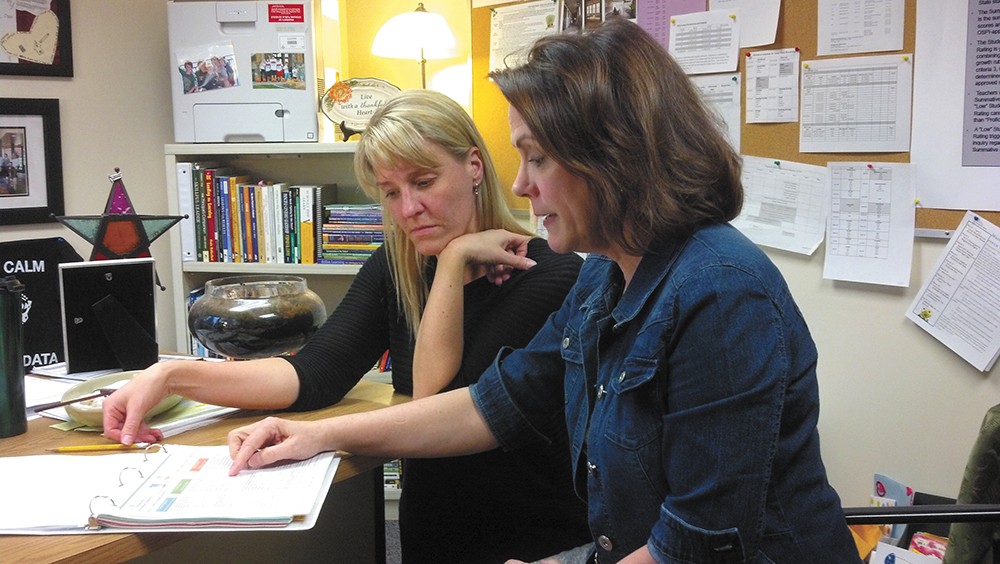 For decades, Spokane Public Schools had a teacher evaluation system that did very little to evaluate teachers.

Twice a year, the principal would come in and observe scheduled lessons. And for those lessons, typically, teachers put on a carefully crafted performance.

"I wanted to get it just perfect," Finch Elementary Principal Kim Harmon says about her teaching days. "I'd put on a great dog and pony show when they came in. And the next day I'd go back to teaching like normal."

It works on a four-point scale instead of just a binary one. "I pretty clearly understood that I probably would not be getting [all] fours," says Theresa Luciani, a second-grade teacher at Finch Elementary. The top tier of the evaluation is intended to be relatively rare, something for teachers to shoot for. Teachers meet with principals before each observation to set out expectations and goals and are required to keep close track of their own performances. Principals conduct surprise observations.

Yet now, as schools adopt the new system, the biggest debate is over an element Washington state doesn't require in its evaluations: state standardized-test scores. The federal government has demanded that standardized tests play a role in evaluations, but teachers unions across the state fervently oppose that idea. "That, to us, is a no-go," says Jenny Rose, president of the Spokane Education Association.

Despite Gov. Jay Inslee's pleas, the legislature so far has refused to change the law, and time is running out. If a bill isn't passed this week to tie test scores to evaluations, districts statewide risk losing control of nearly $40 million in federal funds.

Back in 2001, one federal bill catalyzed a seismic shift in American education. No Child Left Behind gave state standardized tests the force of law: Schools and districts that failed to make the required yearly improvements in student test scores eventually would be penalized.

But each year, the bar automatically got higher, more impossible to clear. Today, No Child Left Behind is literal, technically requiring that every single student in every district show proficiency in the reading and math portion of a state's standardized tests.

In response, the Obama administration has been handing out waivers regarding No Child Left Behind. Those come with strings attached. Last year, the U.S. Department of Education warned Washington state that unless it began using the state standardized test as a factor in its teacher evaluations, it could lose its waiver.

If that happens, about $40 million in federal funds that went to low-income Washington state schools to help struggling students would be diverted to private tutoring organizations.

"Right now, those dollars go straight to our schools," says Lorna Spear, director of early learning and intervention for Spokane Public Schools. "It would come straight out of the schools if we lose that waiver."

The district has measured student performance in cases where funds have gone to private tutoring groups, and Spear says the results have been unimpressive.

"We don't have any control over what they're doing, how they're interacting with kids," she says.

So far, attempts to change state law to save the waiver have fizzled. In February, a Senate bill to utilize standardized tests in evaluations suffered a surprise, bipartisan 28-to-19 defeat after a wave of pressure from the Washington Education Association.

The new evaluation system already takes into account student-growth data, including the use of local district tests. But many teachers see the state tests as a different animal.

Some assert that because standardized test scores come out at the very end of the year, only take a picture of one moment in time and offer limited specifics, they can't adequately represent a teacher's performance. And some worry that using standardized test scores on evaluations will create a disincentive, pushing teachers away from struggling students.

"I've had a student who was completely blind. I've had a student with Smith-Magenis syndrome. Those were the two best experiences in 30 years [of teaching]," says Luciani. "But if my evaluation is based on test scores, a teacher gets very nervous about having struggling students in their room."

That concern is shared by the teachers union.

"What's going to happen is teachers are going to go into competition because they want to get the highest scores," says Rose. "When you're working with little human beings, it shouldn't be a competition."

So far, such arguments haven't convinced the federal government: The risk of Washington losing its waiver is real. Inslee's staff has been talking with the federal Department of Education and has introduced a compromise bill: It would tie state tests to evaluations, but only starting in the fall of 2017. After all, the new state Smarter Balanced test, based on the controversial nationwide Common Core standards, is so new that teachers and students won't even get scores this year.

State Sen. Andy Billig says it will come down to this Thursday, the very last day of the legislative session. He's been skeptical of tying tests to the evaluations, and says the legislature is searching for a solution that keeps the waiver but "protects the integrity of the evaluation system."

"The [Obama] Administration is not particularly flexible on this," says Inslee's spokeswoman Jaime Smith. "There's no Plan B at this point." ♦

Rep. Matt Shea may be gone, but his allies are triumphing (mostly)