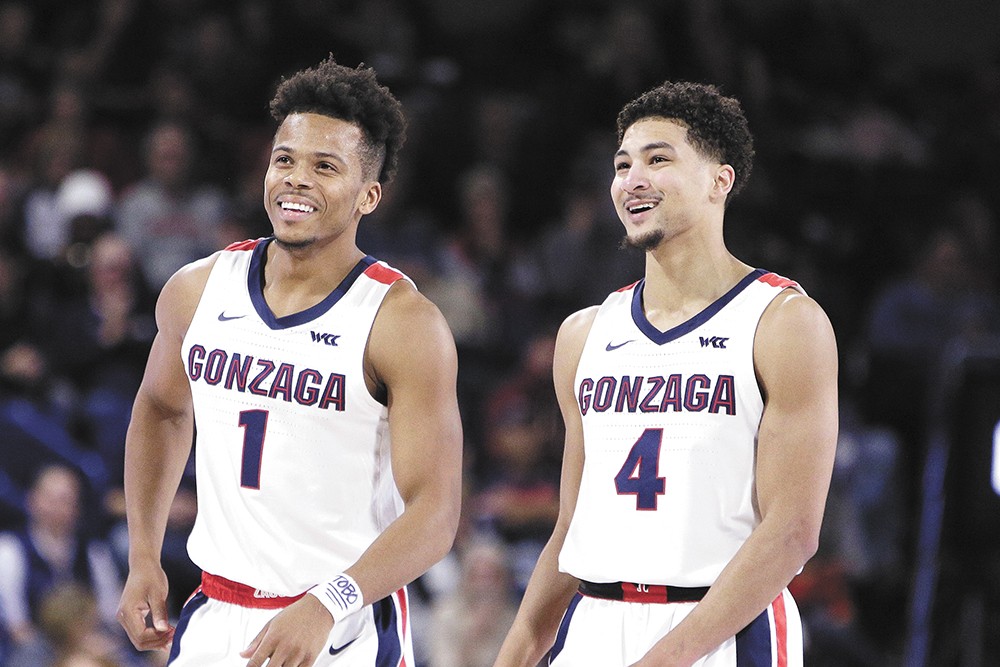 Theirs is a connection that runs a lot deeper than the one season they'll spend together in Spokane.

Admon Gilder and Ryan Woolridge have some obvious similarities. They're both graduate transfer guards who arrived on campus during the offseason. Gilder spent the first years of his college career at Texas A&M, three hours south of Woolridge who was at North Texas. They're not just both from Texas, though. They're from Dallas.

"You can just tell they're from Dallas, man," says freshman Drew Timme, also hailing from the Dallas area. "The way they hoop, the way they get after it. They're all up in you. They're throwing lobs to each other. That's a South Dallas special, you know."

In 2015, Gilder graduated from Dallas' Madison High School and Woolridge graduated from Lake Ridge High School in nearby Mansfield. Being high-level prospects the same age, from the same place, they inevitably crossed paths. So, the lobs they throw are nothing new.

"We played with each other when we were younger," Gilder says. "I actually have a video on my phone of me doing that exact same thing [throwing Woolridge a lob]. Hopefully he'll dunk one of them."

Their connection on the court has proven critically important for Gonzaga this season. Last year's team was led by senior point guard Josh Perkins, who finished his career with more assists (712) than anyone in Gonzaga history. Perkins, along with backup point guard Geno Crandall, was lost to graduation, and shooting guard Zach Norvell departed early for the NBA.

That left Corey Kispert and an untested Joel Ayayi as the Zags only options in a depleted backcourt. So, the Zags went to the transfer portal and picked up Gilder and Woolridge, just as they had found Crandall the year prior. Having already graduated from their respective universities, the players were eligible to play immediately. That alone would have been enough to keep this Gonzaga team afloat, but their connection is what's helping steer the ship.

"For those two guys to assimilate into our program so easily and give up big parts of their games to join us here — and even parts of their personalities I think a little bit — has been a huge key," Gonzaga coach Mark Few says.

Woolridge was a high-major talent playing for a mid-major school at North Texas. Gilder, who was Texas "Player of the Year" as a high school senior, was a star for a Texas A&M team that made two Sweet Sixteens during his time on campus. At Gonzaga, where Sweet Sixteens are commonplace and high-major talent is a requirement, these two would be forced into supporting roles.

Gilder started the first nine games this season, during which he averaged 10.3 points per game, before being moved to the bench in favor of Ayayi. A lesser player would complain and shrink in a situation like that, but Gilder actually got better. He averaged 10.9 points per game in the 22 regular season contests which followed. Down the stretch of the season, Gilder has developed even more — perhaps due to the headband he now sports during games — and is one of the team's two or three most clutch players on the offensive and defensive ends.

For Woolridge, though, coming off the bench isn't even an option.

It's impossible to say how this season would have gone without both Woolridge and Gilder on the roster. Had only one of them chosen to play their final season at Gonzaga, the program would have been forced to find a different player to fill a spot. Considering what the Zags have managed to do over the past 20-plus years, it probably would've worked out — but probably not as well as it has with these two.

Few, when asked to look back at the regular season, mentioned that the team's whole is greater than the sum of its parts. Woolridge and Gilder are phenomenal college basketball players, but intangibles like chemistry and pride, which they bring to the table, elevate the whole of the team. From Dallas to Spokane, their paths have been similar. Now, though, their stories are becoming intertwined.

"We have a connection, and it's definitely escalated a lot," Woolridge says. "I guess you could say a Dallas connection." ♦