Ever since Harry, Abe and Murray passed, their wives have been sniffling, dithering and prowling 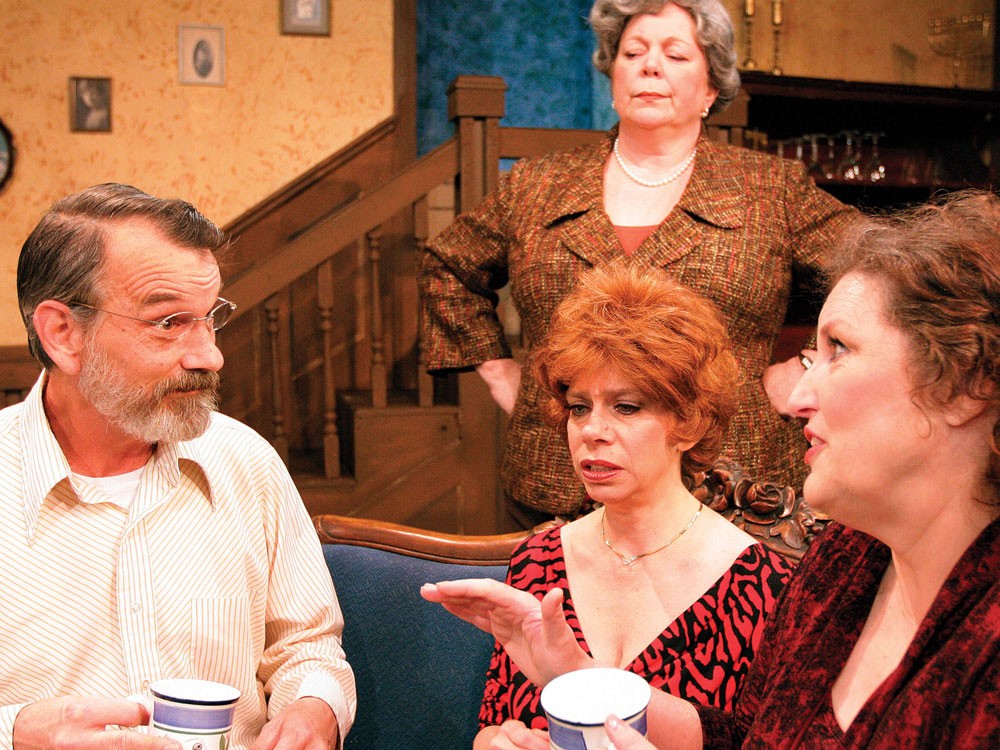 Young Kwak
Sam and three widows: it's a seller's market

They meet, once a month, in a graveyard — their husbands’ graveyard. They used to go on cruises together, play canasta together, the six of them. Now only three are left to remember the kitchen smells, the cigar smoke, the jokes and the laughter.

Getting together with the girls can be fun, but clubs that meet in somber settings are doomed to fracture — and sure enough, Doris, Ida and Lucille differ in their grieving styles, their attitudes toward tradition, their willingness to re-enter the social scene. They tease and chide one another with the familiarity of old friends — they’re getting on with their lives, all right — but underneath the wisecracks, there’s a layer of sadness and loneliness.

After Ivan Menchell’s comedy The Cemetery Club had a short Broadway run 20 years ago, there was a movie in 1993, with Olympia Dukakis as the disapproving one, Diane Ladd as the flirty one, Ellen Burstyn as the unsuspecting one, and Danny Aiello as the eligible widower who comes into their lives.

Susan Hardie plays the flirty one in Spokane Civic Theatre’s production, and she has found some complexity in her man-hungry character. “Lucille, under all that makeup and bravado, is an extremely lonely, insecure and frankly, desperate woman,” Hardie says. “She’s desperate to show the world that she’s still desirable — and in her desperation, she tends to alienate people. That’s why this tight group of friends — the ladies of the Cemetery Club — is extremely important to her. They’re probably her only real friends.” Hardie adds that Lucille’s deceased husband, Harry, “was a real piece of work — probably the ringleader of the group and a gambler, smoker, drinker and womanizer. But lots of fun! They had good times too.”

The Cemetery Club centers on the conflict between Lucille’s desire to play the field and Doris’s intention, out of respect for her husband Abe, to continue mourning. As director Heather McHenry-Kroetch says, “One of them is trying to get back to the past, and one of them is trying to go toward the future. Doris wants the past back, but of course you can’t do that.”

And then there’s Ida (Melody Deatherage), “who’s just living in the present,” as McHenry-Kroetch says, and who attracts the attention of the only available man in the neighborhood, Sam (Thomas Heppler). “Ida is the peacemaker,” says Mary Starkey, who plays Doris and therefore spends half the play bickering with Hardie’s Lucille. Calling Doris “quite the control freak” — and the one who organized the group’s canasta games and ocean cruises — Starkey points out the value that Doris places on tradition. She’s the one who clings most to the comfort of monthly visits to their husband’s gravesites. But if Lucille goes in for fancy clothes and seductive gestures, Doris hasn’t shut herself off completely from life. As Starkey points out, Doris seems to have kept track of Sam’s every move — “and she cuts her hair for the wedding.” Widows can have surprising dimensions.

They can be funny, too. In directing the show, McHenry-Kroetch has tried to distinguish between how “there are times they laugh at each other, and there are times when they do things that cause the audience to laugh at them” — though sometimes it’s a little of both.

A farce like Bottoms Up! might be light entertainment, but it places heavy demands on comedic timing