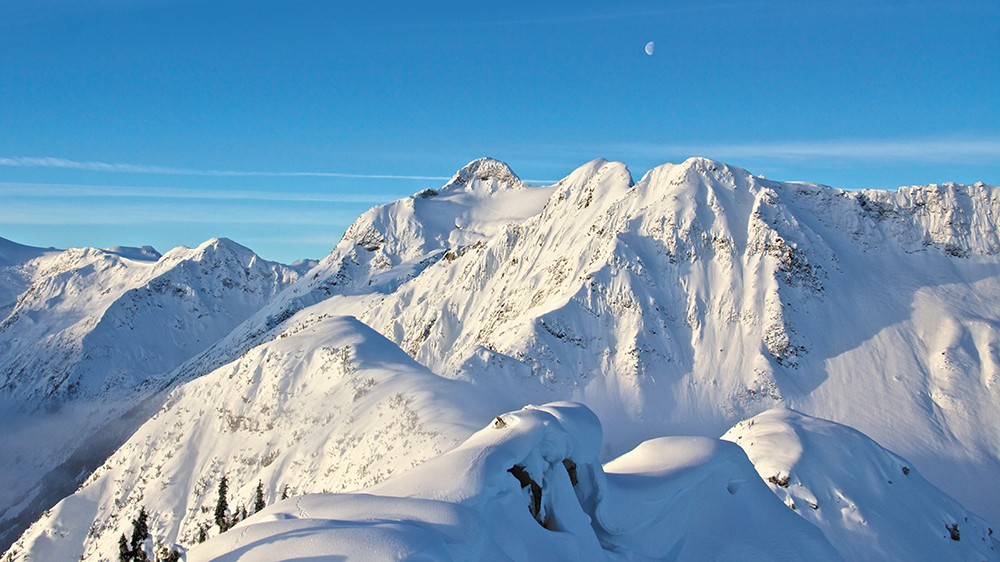 Northern Escape Heli's slogan is "It's Deeper Up Here."

It's not too often that your expectations are exceeded, but on one of our recent powder trips to Northern Escape Heli, we were blessed with that outcome.

The Spokane/Coeur d'Alene area is the gateway to the powder-laden interior of British Columbia, and for the past 25 years I've been taking full advantage of that proximity. Within an eight-hour drive from our area, you can reach more than two dozen backcountry ski and boarding powder operations. Last season, I thought I would change it up a bit and venture further north into British Columbia, to the town of Terrace, home to Northern Escape Heli.

Terrace is parallel to the southern tip of Alaska, just a few miles from the Pacific Ocean. With a long history in the logging industry, it once was known the cedar pole capital of the world. More than 50,000 telephone and power poles were manufactured annually from this community's forests; over the past few years, it has become well known in the summer and fall for its salmon fishing and during the winter for its powder skiing.

What makes Northern Escape so inviting is its location, which brings in storms from the Aleutians and the Pacific Coast. It's not uncommon to have 20 feet of settled snow by season's end. It's no wonder that Northern Escape Heli chose "It's Deeper Up Here" as their tag line.

Getting to Terrace is fairly easy, with short nonstop flights from Vancouver International Airport. Upon our arrival at Northwest Regional Airport, servicing Terrace and Kitimat, we were greeted by Whistler, B.C., native Amy Ross, who moved to Terrace to work at NEH. All of our gear made it, and a short 15 minute drive later, we were at the Yellow Cedar Lodge. This massive lodge, built from the area's abundant yellow cedars, sits on the banks of the Skeena River. During the summer and fall months, it doubles as a first-class salmon fishing lodge.

It was here we were introduced to our NEH guide Yvan Gaston Sabourin, who brought us up to speed on current conditions and where we would be skiing the next few days.

For some of our trip, we would be focusing on an area that NEH has named Cat Land, formerly used mainly as a backup plan when flying could be be difficult due to stormy weather. NEH now offers cat skiing as an option for its guests, with the opportunity to upgrade and fly up to the alpine peaks if the weather turns bluebird or guests are looking for a heli experience on a tighter budget.

Cat Land utilizes nearly 17,300 acres in the Nelson drainage for cat skiing terrain. According to Yvan, "our cat skiing terrain is situated in a mature, old-growth western hemlock forest which is really playful — we have nice open glades, pillow drops, but the great thing there is, we can ski there during the storm. The big, mature trees offer great reference during those storm days." 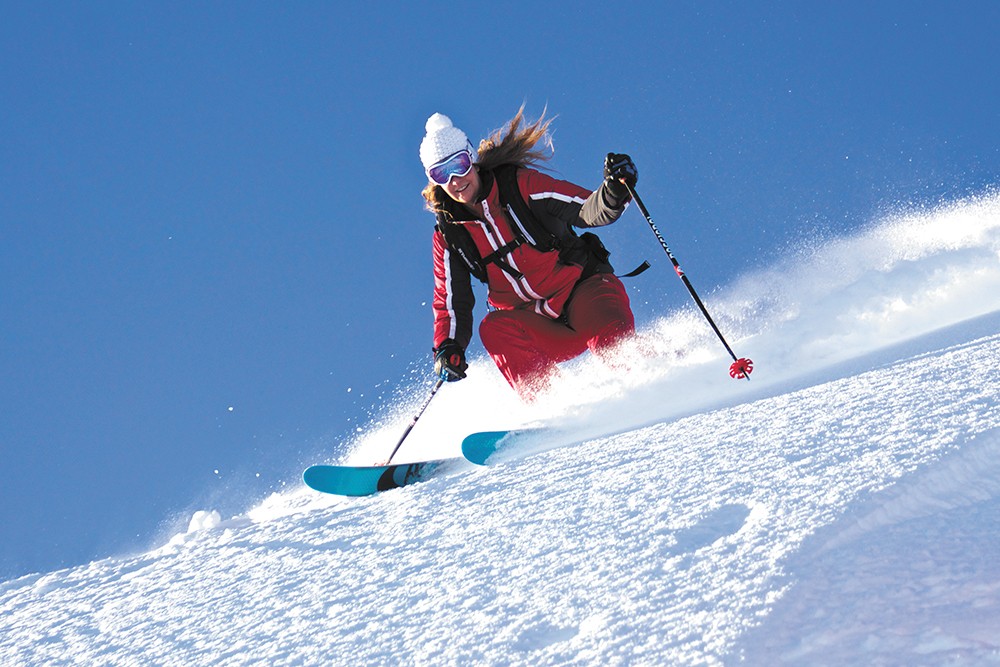 Getting to and from Cat Land happens by helicopter. On the first day of our adventure, we were greeted by gray, cloudy skies, creating some flat light in the big, open areas; this day really showed us how much of an advantage those big hemlocks are during a flat light day. John Witt, former U.S. Freestyle Ski Team member and world mogul champion, traveled all the way from Saratoga Springs, New York, for this experience. He was happy with the Cat Land terrain: "The lines off the cat are tremendous — fun pillow sections and the gladed skiing is like none other; the terrain is second to none."

The snowcats NEH utilizes are big and comfortable, and they seat 12 riders. The cat rides are short, typically between 10 and 20 minutes, just enough to time to refuel and talk about the last run — or if you're like us, to tease Spokane's Desiree' Leipham about her choice of music.

With each cat run, we were treated to some new topography, as unique features made for an exciting day in the old growth forest. There's definitely something magical, almost mystical, about the old growth hemlocks draped with moss.

At day's end, we flew back to the Yellow Cedar Lodge (pictured above), where we were treated to a fun après scene at ther outdoor Ullr Bar. An impressive spread of appetizers was laid out, as well as the world-famous Shotzski. For me, there's nothing better than a celebratory shot of Jägermeister with good friends after an epic day in the powder. Dinner is served at 7 pm in the large dining room, and it is not to be missed. On this three-day trip we were treated to duck confit, fresh salmon and rack of lamb; according to Hayden Lake's Tommy Frey, the latter was one of the better meals he's ever had. "Rack of lamb is my favorite dinner of all time, and this one was done to perfection," he said. "You would swear it came from a five-star restaurant."

On day two, we were scheduled to do a half-day of heli skiing, the other half cat skiing. This turned out to be a great decision, as we were treated to fairly clear skies and a memorable, breathtaking flight into the zone. As we popped out of the lower cloud cover, we were welcomed by one of the most spectacular sights anyone could witness — high, snow-covered peaks under bluebird skies. This was going to be a memorable day for all in our group. "The morning flight in was absolutely gorgeous," said Desiree'. "The sun was coming up, the light was orange and the mountains — you can't imagine how big and spectacular they really are. I won't forget it for the rest of my life."

Our bird dropped us off on what seemed to be the top of the world. It's one of their iconic runs, wide-open steeps with plenty of features as you ski to the valley floor.

As the clouds moved up through the day, we skied a mixed bag of bluebird and clouded, dark forest. Each spot had its own advantages — bluebird steeps with incredible scenery, and old growth forest with plenty of playful features. This was a day to be remembered.

Day three saw us exclusively in the Koala Bell 407 heli, which seats six. Quick, smooth and agile, this powerful bird reminds you of riding in a Ferrari. Seasoned pilot Jacques Auger shuttled us into some incredible terrain all day long. We did a little exploring as our guide Yvan took us into some of the northern terrain, only a fraction of the 1.7 million acres NEH covers. With this much terrain, you have numerous choices to accommodate a variety of abilities.

Whether heli skiing or cat skiing, NEH has an incredible adventure in store for you. Trust me, you won't get bored! Frey was impressed with the operation: "The heli skiing was magical; it's what dreams are made of. And the cat skiing's incredible for a couple of reasons: One, you get to see and ski in old growth virgin timber, and two, nice, really long runs that have consistent pitch, great snow, great tree skiing. It's everything you look for in a cat skiing operation."

Northern Escape Heli is definitely worth the travel time. As they say, "It's Deeper Up Here." You can bet we'll be back. ♦ 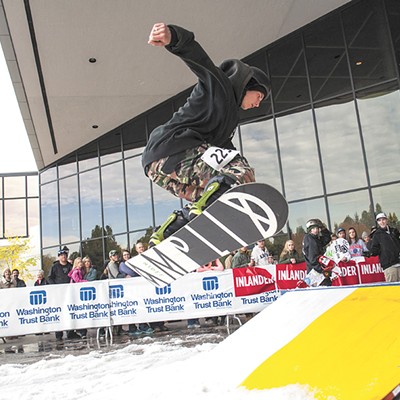 Prep for a Powdery Trek