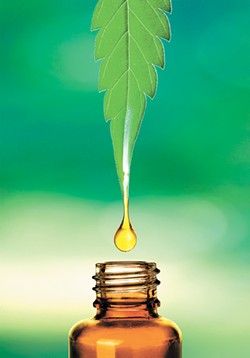 Ten days into his new job, President Donald Trump signed an executive order, termed the one-in, two-out rule, that requires federal agencies to cut two regulations for every new one. "We think we can cut regulations by 75 percent, maybe more," he told business leaders before announcing his plan.

Sadie Higuera hopes that line of thinking is taken seriously at the Drug Enforcement Administration, where the agency's stranglehold on cannabis and all related extracts mirrors the "regulatory burden on all Americans, their pocketbooks, and their businesses" that Trump is aiming to dismantle. It's also a burden on the health of some of America's most vulnerable citizens.

Higuera, 3, was born in Ramona, California, with Schinzel-Giedion syndrome, a rare and terminal condition marked by severe neurological and developmental problems. As an infant she sometimes suffered up to 300 seizures a day. With her doctors at a loss, the Higuera family took a chance on a last-resort treatment: hemp-derived cannabidiol (CBD) oil. The THC-free cannabis extract, delivered through a feeding tube in her stomach, had a noticeable and instantaneous effect on the child's seizures, says her father Brian. "Ten to 15 minutes after we gave her the first one, she immediately came around and I could see her eyes again," he explains in a short film by activists and documentary makers the Science of Weed. "It was pretty awesome."

The Higuera family is now lobbying for Trump's ear. In a letter to the Make-A-Wish Foundation, they declared, "It is our wish to meet him to demonstrate Sadie's fighting spirit and make this a movement of awareness; understanding and legitimizing CBDs as an organic, healthy treatment which has helped so many people beat the odds and live a life they could not have had otherwise."

The Obama administration elected to uphold the status quo, but President Trump's aversion to red tape and federal overreach has injected some cautious optimism into the movement to reschedule cannabis in the DEA's hierarchy of controlled substances (just ask the nascent Cannabis Caucus on Capitol Hill). That would lead, as the Higueras wish, to more research into the benefits of medical marijuana and substances like the RSHO (Real Scientific Hemp Oil) that helps Sadie.

Kids in Washington state who suffer from "terminal or debilitating" medical conditions like epilepsy, multiple sclerosis or even cancer are among the few in the United States who, through a health care professional, can be prescribed such a CBD treatment. Parents and guardians may also soon be allowed to administer such treatments on school grounds and at school-sponsored events if a bipartisan bill, introduced in January, makes it through the wringer that is the Washington State Legislature. ♦