Why we often fall short in our efforts to live more sustainably, and why there's hope

"Are you an environmentalist?"

I was at Boots Bakery talking with some of the organizers of Spokane's Earth Day, and the question threw me off. I don't usually own up to any "ist" labels other than journalist, and besides: I care about the Earth, but I'm not very good at it. Sure, I cringe when someone puts a can in the garbage instead of the recycling, but I rarely bring reusable bags to the grocery store. I don't turn off my computer at night. I usually stop reading about climate change when it gets too depressing.

That's not uncommon. A survey by advertising and marketing giant Ogilvy & Mather found that about 18 percent of people are "Green Rejectors" who don't care about environmental effects and another 16 percent are "Super Greens" who follow through with pro-environment behaviors. The rest — 66 percent — have "good green intentions" but don't want to change their lifestyles.

This shows up in polls, too. Gallup's latest poll shows that more than 65 percent of Americans worry about the quality of the environment a great deal or a fair amount, but in a separate poll asking about a range of national problems, climate change comes in near the bottom, far below the economy, Social Security and the possibility of future terrorist attacks.

This is what's sometimes called the "Green Gap" — we care about the environment, we just don't do much to reflect that. What it means to be "green" encompasses so many different (and sometimes conflicting) values and actions that we often don't know where to begin. Even when we do, it's well-established that people make choices in irrational ways, and decisions that affect the environment are no exception. A few examples:

• A new study of grocery bills at a California supermarket showed that shoppers who brought their own reusable bags were more likely to buy "virtuous" items like organic produce — and were also more likely to "treat themselves" with items like ice cream, cookies and chips.

"All this research is confirming that outside temperature has an effect on our belief in global warming," says Jeff Joireman, a Washington State University professor who researches consumer choices and authored one of the global warming studies.

People have a tendency to discount big, distant problems, he says. We're easily influenced by our immediate environment, as well as social factors. We try to do what everyone else is doing or what everyone expects of us: If you think other people think you should recycle, you're more likely to do it.

But habits are hard to break. And the biggest opportunities for change can pass us by if we're not paying attention: how close we live to work, how big our homes are, what type of vehicles and appliances we use every day.

In Pullman, Joireman typically drives to work. But he lives close enough to campus that he can walk, and recently he's been walking because construction on campus is making parking scarce. He acknowledges that he'd probably drive right up to the door of his building if that convenience were an option — but since it's not, his habits are changing.

"The trick is to try to design the environment in a way to encourage the behavior we want," he says.

That's what Spokane-based Ecova does on a national scale for multi-site companies managing locations all over the country, like chain stores. Ecova, which was recognized by the Environmental Protection Agency this year with a Sustained Excellence Award, started out managing utility bills for these complex companies, and soon realized all that data about energy use could help their clients figure out how to use less. Changes that seem small — energy-efficient appliances, turning off lights at night, keeping doors closed when the AC is on — can add up quickly as savings that offset the initial investment.

The primary motivation for most companies is efficiency and saving money, says Ecova's product management director Alison Liaboe, but many also care about public perception. Given the choice, customers overwhelmingly want to do business with companies that value sustainability.

"We vote every day with our dollars," Liaboe says. "We're not just bystanders in our economy."

Sharing a similar message of empowerment, the volunteers organizing Spokane's Earth Day (see p. 32) were happy to say that sure, I'm an environmentalist, even if my habits aren't perfect. At this year's celebration at Riverfront Park, people will be able to learn about serious environmental threats at booths — oil trains, climate change, the Midnite uranium mine — but shouldn't leave feeling helpless.

"We want to educate and inform people of all ages," Earth Day volunteer Mike Beasley says, "but do it in a way that they embrace it, appreciate it and are motivated by it."

"Not depressed," his wife April Beasley adds with a laugh.

Research shows that identity — whether we think of ourselves as environmentalists, recyclers, outdoors people or part of a socially conscious community — is one of most powerful factors in the decisions we end up making.

"I think what really cultivates change more than fear or anger about an injustice is a love for something," says Sherri Urann, another Earth Day volunteer. "We're trying to plan an event that opens up a space for people to just love what we have, and be grateful for it, and then out of that have the action arise." ♦

By Laura Johnson and Lisa Waananen 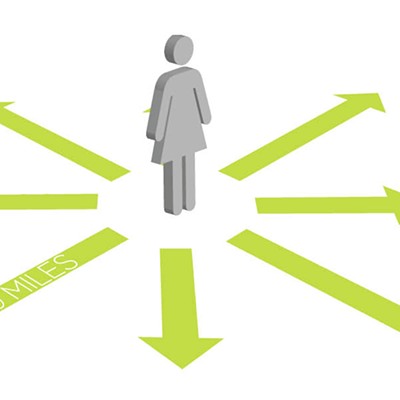