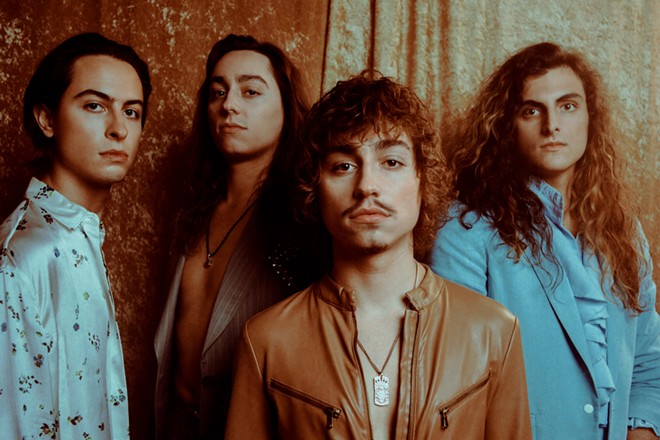 The comparison has been made thousands of times: Greta Van Fleet is just a Led Zeppelin rip-off. Sure, frontman Josh Kiszka's pipes are Plant-ish, but he belts out notes that soar into the sky and come crashing down. As the rest of the band jumps in and adds their own melodic shimmer and glow, his illustrative lyrics explode into a euphony of grandiose proportions.

Composed of brothers Josh, Jake and Sam Kiszka and longtime friend Daniel Wagner, Greta Van Fleet first gained some traction with their 2017 debut EP, Black Smoke Rising, which boasted those previously mentioned Zeppelin-y classic rock vibes despite most of the band still being in their teens at the time. It wouldn't take long for the youngsters to hit it huge.The band's first LP, 2018's Anthem of the Peaceful Army, shot them to the top of the rock stratosphere almost instantaneously. Soon they were headlining major festivals, performing on Saturday Night Live and even winning the 2019 Grammy for Best Rock Album for Anthem.

While the group might be worldbeaters now, the guys hail from a humble little Michigan town called Frankenmuth, which is not dissimilar to Washington's own Leavenworth, a Bavarian utopia in which everything feels a bit like a movie set.

"We grew up a whopping 4 miles out of town," says Sam Kiszka, the band's bassist and pianist. "Essentially, all we had was wilderness, farm fields and forest. We always just hung out there; it was our favorite pastime. We would create these stories, these plots, and we would dress up in costumes and put on these, I guess they're kind of like, once-in-a-lifetime performances with each other."

These performances, unbeknownst to them, were the first shows they would ever put on as a group. Now, the band is on a world tour and, when they aren't clad in jumpsuits and rhinestones, they spend time reflecting on their past in order to spawn new ideas for future endeavors.

"I think it's a testament to the beauty, simplicity and complexity of nature that we garner such inspiration from the natural world," Sam says. "I could be in a forest in Belgium and feel like I'm right at home. Nature is where, I would say, we feel most at home, in tune and in our creative element."

While Greta Van Fleet garnered plenty of criticism in the early days for echoing so much music of the past, the band knew it was capable of more than just your typical rock record. The group's latest release, 2021's The Battle at Garden's Gate, shows immense growth musically and conceptually.

"I like to think of our first album as a lower common denominator type of thing. Something that's much more accessible to someone who is just a casual music fan," Sam says. "From there we wanted to create something that was a bit more intellectual. I feel like The Battle at Garden's Gate is the album that we always wanted to make, and the album that we knew we could make."

The band crafted an all-encompassing vision for the new album, with themes of war, religion and ancient civilizations dispersed throughout the record. The track "Built by Nations" scrutinizes the idea of dying for one's country, and the lyrics of "Broken Bells" discuss corruption of innocence. These thematic choices leach into their musical style and is reflected in songs like "The Weight of Dreams" and "Heat Above," which both feel far more cinematic than previous works.

Sam cites Star Wars as a source of massive inspiration for its detailed world-building and ability to transport people to another place completely. Though Garden's Gate is conceptually and musically gloomier than Anthem, he doesn't feel that it's a "dark" album.

"Don't get me wrong. It feels serious at times," he says. "But, we're not in the studio all bummed out — we're having a ton of fun creating together. Overall, I see it as very hopeful. Hope is the best human quality that we have."

Coming out of the COVID-19 pandemic, Greta Van Fleet had an entire new album, fresh songs, fresh ideas and was ready to get back on the road. While the band gained a bit of traction in 2020 thanks to a TikTok trend wherein users mimicked Josh's on-stage mannerisms to their song "You're The One," online recognition can't match the thrill of being back on stage. The group was finally able to celebrate their new album on its 2021 Strange Horizons tour.

"It ended up being this celebration of life coming out of a period of, not necessarily darkness, but reconstruction," Sam says. "We were rebuilding certain things. Rebuilding ourselves while the infrastructure of society was also being rebuilt."

The band's new Dreams in Gold Tour, which stops at Spokane Arena on Sept. 2, is like no other tour the group has produced. With flashy stage lights and pyrotechnics, Greta Van Fleet looks to create more than a concert for their fans — they want to provide an experience.

Through trial, error and plenty of comparisons to certain rock legends of the past, the band has blossomed into much more than what people take them for at first glance — musicians striving to top themselves with every new release and performers looking to provide hope, positivity and change.

"It's the imagination at work and the obsession to create something that doesn't exist yet," Sam Kiszka says. "It's the arts' ability to give you something that this world alone can't give you." ♦