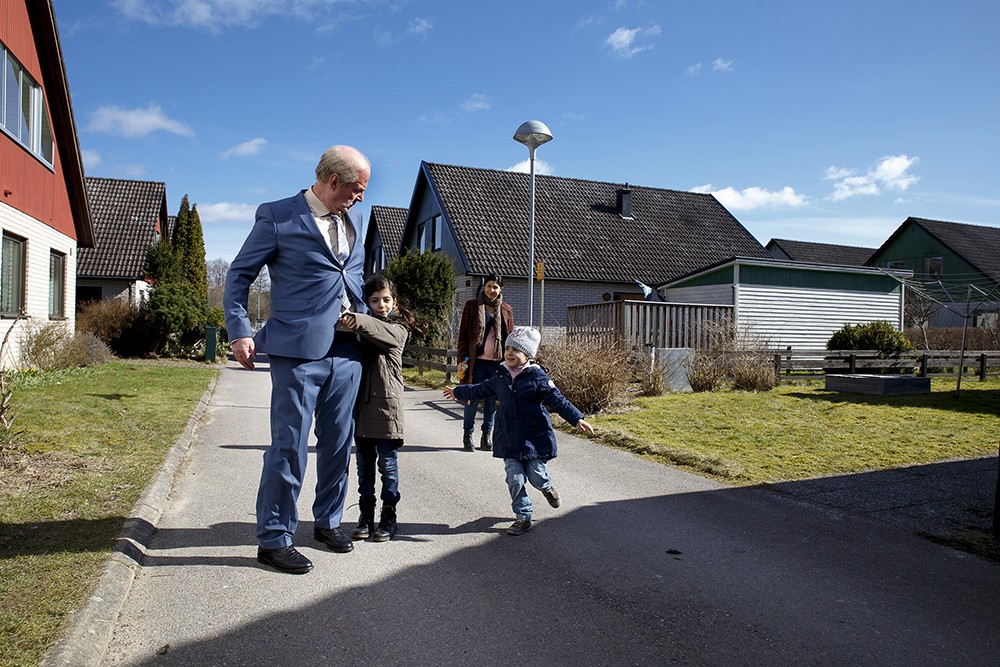 Rolf Lassgard plays the titular — and quite grumpy — character in A Man Called Ove.

The cranky curmudgeon in this Swedish import

walks around with the puckered face of a man who's seemingly spent a lifetime sucking on lemons. He's the quintessential sourpuss. Each morning, Ove (Rolf Lassgård) authoritatively patrols the sidewalks and alleys of his modest residential complex seeking infractions (the sight of an abandoned cigarette butt or the discovery of recyclables in the wrong receptacle enrages him) with the single-mindedness of an Inspector Javert. Short-tempered and confrontational, he unleashes his acid tongue on his scofflaw neighbors — and anyone else who pisses him off — with the rage of a misanthrope. You have to begrudgingly admire Ove for his consistency: He's an equal-opportunity asshole.

Of course, there's more than what initially meets the eye in A Man Called Ove (screening this week at the reopened Magic Lantern Theatre), which is based on the wry 2012 debut novel by Swedish blogger Fredrik Backman. In the tradition of grumpy old men beginning with Ebenezer Scrooge, you predictably know that beneath this 59-year-old's tart exterior is a lonely soul embittered by the tragedies that have punctuated his life, most recently the death of his adored wife, Sonja (Ida Engvoll), to cancer. Visiting her gravesite faithfully, he promises to join her in the afterlife, but his unsuccessful efforts to kill himself in a series of comic suicidus interruptus attempts (the ringing doorbell is straight from Crimes of the Heart) only infuriate him further. When one such attempt lands him on the floor after a makeshift noose breaks mid-swing from the living room ceiling, Ove angrily returns the frayed rope to the hardware store and berates an uncomprehending clerk for her stupidity in selling an inferior product.

A Man Called Ove deftly incorporates the seminal moments of its titular character's past in a series of flashbacks that inform, rather than intrude upon, the present. (In the film, these sequences cleverly occur as Ove's brain is being slowly deprived of oxygen during one of his failed shots at ending it all.) The fluid juxtaposition of the present-day and younger versions of the character is impressive, given how other similarly structured films have clunked along with the expository grace of two left feet.

While Filip Berg shines as the callow younger version of Ove in those scenes — his goodness and naiveté are heartbreaking — it's the effervescent Engvoll as the beloved Sonja who truly brings the past to life. It's no wonder the man loved this wonderful person and now misses her so much; she had a smile so generous it could capture a thousand hearts. As the film proceeds, Ove's blossoming friendship with his no-nonsense pregnant neighbor (an engagingly forthright Bahar Pars) and his increasingly noncombative social interactions with others slowly rehumanize him.

As this anticipated transformation occurs, however, something unfortunate happens: The movie starts to unravel like that blue cord indignantly tossed onto the store counter. The last 10 minutes or so are heartwarming to the point of schmaltz. Even the adept Lassgård, as the old-fogey version of Ove, can't make this increasingly feel-good shtick stick. You can just imagine him shaking his head with disgust at this betrayal. "Idiots!" he would steadfastly proclaim. "Nothing but idiots!" ♦

A Man Called Ove is not showing in any theaters in the area.