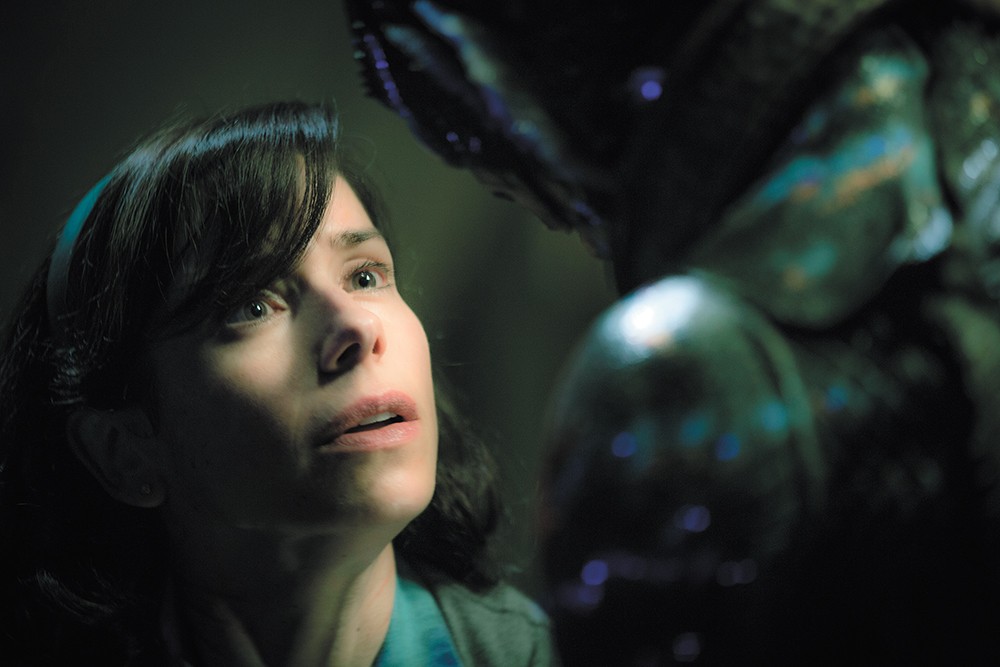 Oscar nominee Sally Hawkins plays a woman whose love has gills in The Shape of Water, a twisted fable from the director of Pan's Labyrinth.

Their stories of magical fantasy helped spark initial creativity and imagination in all of us.

But fairy tales are inherently designed for children. As we grow older, the world wears us down and our idyllic notions fade to the point where stories of kids getting in trouble in the woods or princesses finding true love feel silly and unsubstantive. While we may have always known the stories were fiction, they no longer feel real.

The Shape of Water is a fairy tale for adults. Its 1960s-set story of a mute woman falling in love with a captive fish-man has all the elements of spellbinding wonder of classic children's tales, but also features moments of legitimate gore, festering severed appendages and frank discussion of human-amphibian sex. Guillermo del Toro possesses a beautifully twisted mind.

As a mute janitor who communicates via American Sign Language, Elisa (Sally Hawkins) lives a literal quiet life. She resides alone in an apartment above a movie theater and is close with her neighbor Giles (Richard Jenkins), a kindhearted artist who does ad copy work and has a romantic secret of his own (the type that isn't accepted in his era). She works at a secret United States government lab in Baltimore alongside her only other friend, Zelda (Octavia Spencer), who's chatty enough for the both of them.

One day, Col. Richard Strickland (Michael Shannon) brings in an "asset" — a fish creature pulled from a river in South America — and chains it up in a tank in one of the lab's secure rooms. Fascinated, Elisa begins sneaking in and forming an unspoken bond with the creature. As tensions rise and things begin to get dire for the creature — including getting caught up in the maneuverings of Cold War spying — Elisa must figure out how to protect the creature she's beginning to love.

As Elisa, Hawkins delivers a stunning masterclass in non-verbal acting (one that should end with a Best Actress Oscar). There's not a wasted millimeter on her face as she conveys longing for something beyond her doldrums, loving warmth toward her amphibious beau, excitement when sharing hard-boiled eggs or music with her confined pal, fear when confronted by Col. Strickland, or anger when she feels metaphorically voiceless. Above all, she carries a childlike wonder and a hopeful innocence, making her a perfect protagonist for a fairy tale love story.

Always a director with distinct vision, del Toro takes things to an even higher level with The Shape of Water. With apologies to Pan's Labyrinth, this is his finest film to date. He and director of photography Dan Lausten submerge the viewer in a sea of gorgeous aqua-neon colors and artful compositions. The production design captures the polarity of the '60s: that classic American dream sheen of Cadillacs and white-picket-fence family life meets the gritty, unseemly undercurrent of oppression. Without giving anything away, the apartment flooding scene dazzles like few things committed to film in recent memory.

Of course, all the style would be naught if the fish-man it all revolves around looked stupid. Thankfully, del Toro's affinity for classic creature features helped prevent a CGI catastrophe. The core of the performance (billed as "Amphibian Man") comes from practical effects, namely Doug Jones acting in a heavy rubber and latex suit (enhanced by digital effects).

There's no getting around that The Shape of Water is a monster movie. But the monster isn't the character that can breathe underwater: It's Col. Strickland, or rather, what he represents. Played with the steely menace that has become Shannon's calling card, he is a monster of oppression. He's a monolithic symbol of the powerful white American man: a cold, humorless, self-interested and sexually manipulative being who can't fill the hole in his hollow life, so instead uses his energy to destroy the lives of those below him. While it's obvious he sees this fishy captive as less than human, an affront to God's will not made in "His image," Stickland's America really feels the same way about Elisa. And Zelda. And Giles.

In lesser hands than del Toro's (and co-writer Vanessa Taylor's), Col. Strickland might seem like a cartoonish archetypical evil, but it works within their contextualization. A fairy tale ending works better if love really does have to conquer all. ♦

The Shape of Water is not showing in any theaters in the area.