Gun Laws Had ‘Little to Do’ With Pittsburgh Synagogue Shooting, Trump Says 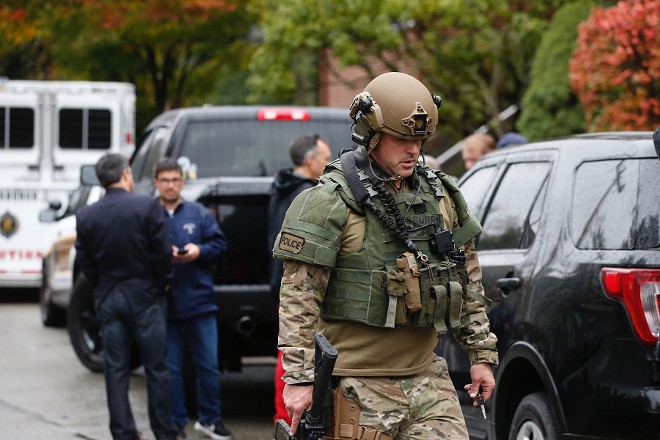 Jared Wickerham/The New York Times
Law enforcement personnel at the scene of a mass shooting at the Tree of Life Synagogue in Pittsburgh, Oct. 27, 2018. Police reported that there were multiple casualties, and that a suspect was in custody.


President Donald Trump said Saturday that a mass shooting at a Pittsburgh synagogue that left at least four people dead could have been prevented with the help of an armed guard, and that the nation’s gun laws had “little to do” with the shooting.


“If they had protection inside,” Trump said to reporters, “the results would have been far better. This is a dispute that will always exist, I suspect.”

Four police officers were among the injured, according to Wendell D. Hissrich, Pittsburgh’s public safety director.

Speaking to journalists on his way to two events in the Midwest, Trump, who had initially issued a scripted call for unity as bomb scares targeted prominent Democrats and a news organization, offered few words of comfort.

“Looks like multiple fatalities. Beware of active shooter. God Bless All!” Trump wrote on Twitter on Saturday morning after reports of the shooting, at the Tree of Life synagogue in Pittsburgh.

“It’s a terrible, terrible thing, what’s going on with hate in our country, frankly, and all over the world,” the president said. “And something has to be done.”

With 11 days to go until the midterm elections, the president continued with his day as scheduled Saturday: Trump was due to speak at an agricultural convention in the afternoon before hosting a campaign rally in Murphysboro, Illinois.

Describing herself as “saddened and appalled,” Sarah Huckabee Sanders, the White House press secretary, said, “We stand in total solidarity with the victims and all of the Jewish community against bigotry and hate.”

Melania Trump, the first lady, also sent a tweet, becoming one of the first members of the White House to call for unity: “My heart breaks over the news out of #Pittsburgh. The violence needs to stop. May God bless, guide & unite the United States of America.”