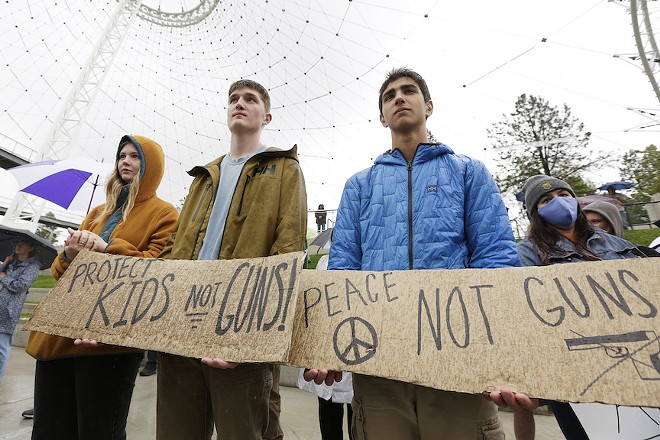 Young Kwak photo
(From the left) Sage Vanhoff, an 18-year-old senior from Lewis and Clark High School; Jonathan Hughes; and Hrair Garapedian, a 16-year-old sophomore from St. George’s School, listen to a speaker during a rally against gun violence at Riverfront Park, Saturday, June 4, 2022, in Spokane, Wash.

This weekend, hundreds of Spokane high schoolers will take the stage at the Podium building and close out four years marked by disruption.

Many traditional graduation milestones remain unchanged, but a string of mass shootings across the country and safety incidents at local schools have cast a shadow on some aspects of the festivities.

Speaking to the Inlander at a rally for gun reform in Riverfront Park last Saturday, Lewis and Clark senior Sydney Dykes said her graduating class was struggling to plan a senior prank. A few ideas had been thrown around, but in light of recent events, they were struggling to come up with something sensitive that wouldn’t risk causing a panic.

"It's kind of a constant worry in the back of everyone's mind,” Dykes said. “If someone pops a bag or is running in the hallway … we have to worry about if it’s somebody just messing around, or is that something that’s actually going to cause danger?”

Since the mass shooting in Uvalde on May 24  — which came 10 days after 10 people were killed by an 18-year-old gunman in a racist attack on a Buffalo supermarket — there have been more than 35 mass shootings in America, according to the Gun Violence Archives, which defines a mass shooting as any incident in which at least four people are injured or killed.

Shots rang out at workplaces, hospitals, supermarkets, churches and bars. The violence has also struck at least three graduation parties.

In recent months, there have also been multiple local incidents involving students bringing firearms to Spokane-area schools. One day before the shooting in Uvalde, authorities were called after a student brought a gun to Sunset Elementary School in Airway Heights. In March, a 12-year-old student was arrested after bringing a loaded revolver to Willard Elementary.

On June 1, a 13-year-old was arrested for allegedly threatening to shoot staff at Glover Middle School. The boy told a local resident that he had buried a handgun on school grounds because several men in their twenties had threatened him, according to court documents first reported by the Spokesman-Review. School staff told police they thought the threat was credible and officers were stationed at Glover Middle School.

One of the speakers at the Riverfront Park rally was Gee Kelly, also a senior at Lewis and Clark. Even though he’s just a few days from the end of school, he tells the Inlander he still worries about the threat of gun violence.

“Will I make it to graduation?” Kelly says.

At the school board meeting June 8, Spokane Public Schools Chief Operating Officer Shawn Jordan gave a lengthy presentation on some of the steps the district has taken in recent years to tighten school security.

All schools in the district have closed campuses with a single point of entry, Jordan explained. When a visitor approaches, they have to be buzzed in by office staff, who monitor the entrance through security cameras and can communicate with visitors by telephone.

Dykes has mixed feelings about the entry procedure. She remembers one day when she had to bring a heavy, suspicious-looking black bag to school for a chemistry project. She was expecting it to get searched, and was surprised when she was able to get in the building without any questions.

“If I can get away with it, can other students?” Dykes says.

Dykes also notes that, if one student gets buzzed in, another can easily follow behind without getting screened.

Jordan told the school board that there is an ongoing need to remind students, especially high schoolers, that they shouldn’t leave doors open or open them for other students.

All schools are equipped with an emergency pull handle in the office — referred to as the blue handle or the blue button — that will immediately lock all exterior doors in the event of an emergency situation.

In recent years, classroom doors in Spokane schools were upgraded so they can be locked from the inside, which means teachers won’t have to step out into the hallway during a lockdown. Students also practice lockdown and evacuation drills in classes at least once a year. They also practice “secure and teach” drills, which involve locking exterior doors but continuing with classes as usual.

While lockdown drills are probably helpful, Dykes notes that most of the people committing school shootings these days are familiar with them, and will know where people are hiding.

In middle school, Dykes remembers a teacher showing her class how to block the door with a rolling file cabinet. In high school, a chemistry teacher told her how she had chemicals in the room that could hypothetically be used to defend the classroom.

“That’s just kind of a sad thing we have to think about,” Dykes says.

Lockdown procedures are also being built into the physical design of two new middle schools the district is building. The new schools will have a cluster of classrooms in a common space known as a neighborhood. The entire neighborhood can be quickly secured with automatic locking doors. The district is also in the process of conducting site visits to schools to identify possible improvements for things like cameras, exterior lighting and signage, Jordan said.

The district currently has 2,350 security cameras across its schools. Jordan said he has a meeting scheduled next week with an artificial intelligence company that can monitor security camera feeds to automatically detect weapons and alert administrators.

AI-powered security cameras have become increasingly common in schools across the country, though some advocates have voiced concerns about privacy and a culture of surveillance.

Rallies and protests organized by students in recent weeks have focused less on physical school security, and more on gun reform and mental health. On Saturday, the crowd of about 150 students, parents and community members braved the rain to gather at Riverfront Park to demand action from elected officials.

“We need to start uproar, we need to tell people we’re angry, we need to hold people accountable,'' said Carly Dykes, Sydney's sister and a sophomore at Lewis and Clark who helped organize the rally.

The crowd broke into chants of “Thoughts and prayers are not enough!” and “No more silence, end gun violence!" Many of the speakers called out U.S. Rep. Cathy McMorris Rodgers, who has previously received campaign contributions from the NRA.

“It is not fair that me as an 18-year-old has to yell at a Congress member or our government representatives to make sure that kids aren’t shot,” Kelly, the Lewis and Clark Senior, told the crowd.

The students there were angry. Many had memories of hearing about the shooting at Freeman High School in 2017 and the shooting threats at Lewis and Clark in 2019.

But even as they grapple with the trauma of a country that can’t stop shooting, the kids are still managing to find joy. Six days after the rally, Sydney Dykes responds to a text from the Inlander asking if the senior class had made any progress on figuring out a prank.

“yes!” she replied, along with a picture of the entrance to Lewis and Clark absolutely plastered in toilet paper. Seniors had TP’d the entire front entrance of the main building and blocked off a parking lot so underclassmen couldn’t get to school. A few cars were even saran-wrapped.

Editor's note: This story was updated at 4:21 pm June 10 to correct the name of the graduation location to the Podium. 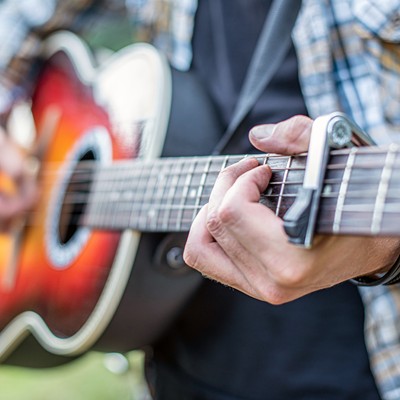