Imagine if the key to treating — or maybe even curing —

a host of chronic diseases and disorders, like Alzheimer's, autism, mental illnesses, obesity, diabetes, multiple sclerosis and Parkinson's, was living inside of us all along.

It may be, and a microbiologist at Eastern Washington University is one of many researchers around the world currently studying the complex effects that the trillions of microbes living in our digestive tracts may have on our overall health, including the onset of chronic illness.

Since 2007, and at EWU for the past two years, Javier Ochoa-Repáraz has examined anomalies in the overall makeup of microbes — referred to as the microbiome or microbiota — in the gastrointestinal tracts of people diagnosed with multiple sclerosis, a chronic and progressive autoimmune disease that attacks the central nervous system and disrupts communication in the brain. This can cause paralysis, blindness and a range of other symptoms. MS is thought to affect more than 2.3 million worldwide; there is no cure or definitive known cause.

Based on the findings of Ochoa-Repáraz and others in his field, so far it's been determined that the overall composition of the gut microbiome in MS patients differs significantly from that of otherwise healthy individuals. There are also notable differences in the microbiome in MS patients who are in stages of symptom remission or relapse, Ochoa-Repáraz says. He theorizes that these changes in the microbiome at any stage of MS in turn impact the body's immunological responses because of a link between the gut and the brain, and that the microbes living in our GI tract are able to affect how our immune cells function. 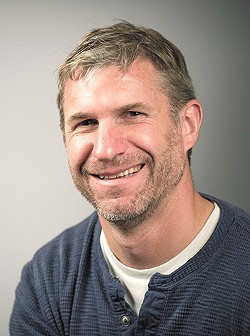 Yet when it comes to pinpointing exactly how these microbes of the intestines and colon affect the immunology of patients with MS, things are less clear. Ochoa-Repáraz is focusing his current research, with the aid of undergraduate and graduate microbiology students at EWU, on finding out whether the presence of a specific microbiome makeup is somehow linked to the cause of MS, or if a patient's microbiome is in turn altered by the presence of the disease.

"It's like the chicken and the egg — what comes first? The imbalance of microbes or the disease changing the gut microbiology?"

He hypothesizes that the relationship is bidirectional; a two-way street — the microbes affect the brain, and the brain affects the microbes.

Ochoa-Repáraz says the human gut microbiome — which consists of bacteria, virus, fungi and other microorganisms — is influenced by a number of known factors: The foods we eat, our genetic makeup, stress levels, age, where we live, if we have household pets or come into contact with other animals, and even how we were born or if we were breastfed as infants.

"Most of the ongoing studies these days evaluate the effect of microbes on disease, and how the imbalance of the microbe composition could affect the onset or progression of a given disease," he explains. "The main hypothesis I'm working on is how diseases affect the composition of the microbiome."

Ochoa-Repáraz and his students are using mice to study the microbiome's makeup during the secondary progressive stage of MS, which is chronic and affects up to 70 percent of MS patients. Of the drug therapies currently available for MS patients, most are not effective at this later stage, he adds.

The best-case outcome of his contributions to this area of study, he says, is that it helps to eventually pinpoint a specific microbiome composition, which could allow scientists to develop a probiotic treatment for MS patients that would compensate for their gut microbe imbalances. This theoretical treatment method could also be applied to other diseases if a direct link to patients' gut microbes is discovered.

"We could also isolate the microbes we know are important in promoting beneficial immune responses, and identify the molecular compounds that promote those effects and would be protective against the disease," he explains.

Yet this particular area of the growing field of gut microbe research — as with other scientific work examining the complex relationship between our health and the microorganisms that live inside our bodies — still has a long road ahead, Ochoa-Repáraz says.

To get to the crux, we still need to determine the specific functions of these trillions of microorganisms; it may not be just about the numbers or the relative abundance of certain bacteria strains versus others, he says. And while studies like this one are so far just using mice to recreate the disease, he acknowledges that more research and data on MS in humans is needed.

Even though this area of disease study is still in its infancy, Ochoa-Repáraz is hopeful that his research at EWU contributes valuable insight to the scientific community's overall understanding of how changes in the body's microbiome can promote or inhibit disease, whether specifically in MS patients, or beyond.

"We couldn't do this 10 to 15 years ago, and that is why we were ignoring [gut microbes] — we couldn't understand how many there were, and what they were doing down there." ♦

A Ring by Spring?