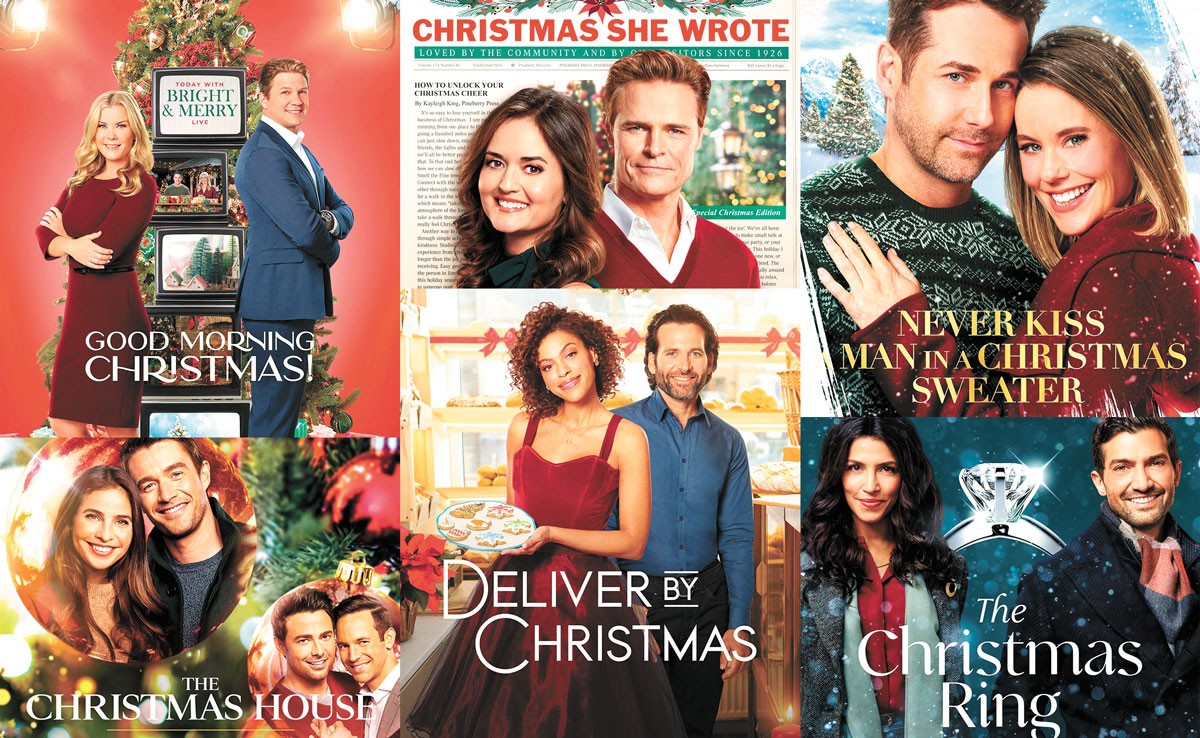 Of all the holiday traditions I regularly see people tweeting about, the one I understand the least is the Hallmark Christmas movie marathon. For about a decade, the greeting card company's TV channel has been cranking out aggressively sexless holiday-themed films for its annual "Countdown to Christmas," inspiring books, podcasts and even fan conventions.

Without ever having seen one, I felt like I somehow knew the conventions of the Hallmark Christmas Movie anyway. Your standard HCM centers on a generically attractive hetero couple, usually played by a former soap opera star and a '90s sitcom actor, and they either A) fall in love despite their initial reservations, B) mend their relationship because the spirit of Christmas demands it, and/or C) team up to rescue their rural hamlet from a Scrooge-like land developer. These films (if you can call them "films") are G-rated excuses to show off luxurious sweaters, cozy living rooms and glistening piles of artificial snow.

The Hallmark movie machine is a beast. The channel starts airing Christmas content the week before Halloween, with a new feature-length movie each week (true to their machine-made form, they all clock in at a brisk 83 minutes without commercials). And Hallmark isn't the only network taking on this subgenre: Lifetime cranks 'em out at a rate that'd make Santa blush, as does Netflix, and there's a Hallmark spinoff channel called Movies & Mysteries that, I guess, is the edgier of the two networks.

Since I had nothing better to do, I decided to dip my (mistle)toe in these uncharted waters. I wanted to get to the core of why people seek comfort in these movies, but I also wanted to look at them as movies. I wasn't about to watch all of the 40-some titles punched out of the Hallmark cookie cutters this year, so I picked a select few based on some ranked fan lists and some highly scientific personal criteria (basically, the ones with the punniest titles).

Because all of these movies follow nearly identical schematics, I've developed a handy shorthand key for some of the most common HCM elements.

UWHJ — Unhappy With Her Job

Here's what I watched.

Morning show host Alison Sweeney discovers her CYGH co-host, a former quarterback played by Marc Blucas, is quitting. But as they broadcast from the Christmas celebrations in a RBCST, she has a LMCOH and realizes she's in love with him, while he decorates a single gingerbread house and discovers an unfettered LOC.

Danica McKellar is a chaste Carrie Bradshaw type who gets laid off, realizes she was always UWHJ and returns home to the RBCST where she grew up. Her readers revolt, and when her CYGH editor can't get her on the phone to reinstate her position, he hops on a plane and follows her (instead of just texting like a normal person). She has a LMCOH about her job, and so he has to convince her to head back to the big city and leave behind her hunky ex-boyfriend who's also a doctor.

Never Kiss a Man in a Christmas Sweater

An elementary school teacher who also paints the ugliest Thomas Kinkade ripoffs you've ever seen hits a CYGH jogger with a Christmas tree, then offers him her guesthouse to convalesce, and then... I turned it off. This was the third Hallmark movie I watched in rapid succession, so maybe fatigue had set in. Moving on.

The Christmas House has garnered publicity for being the first Hallmark movie to feature a gay couple in lead roles. It's also the one I saw that came closest to approximating an actual movie, despite an absolutely deranged premise: As they prepare to sell their house, a rich AF family indulges in their once-annual tradition where they swap out all the furniture and replace it with a storage locker full of Christmas stuff, because they're absolute psychopaths. Will this final descent into holiday mania inspire a LMCOH? Yes, Virginia, there is such a thing as too much LOC.

I picked these titles because they respectively placed first and dead last in an E! Online ranking of 2020 Hallmark joints. And honestly, I don't much see a recognizable gradation in quality between the two — I thought they were both insufferable. Deliver by Christmas was the highest rated title on that list, and it's a You've Got Mail-style rom-com about a baker who doesn't realize her new favorite customer is also the handsome widower she chats up at the Christmas tree lot. In the bottom-ranking film, The Christmas Ring, a journalist UWHJ tries to track down the original owner of an inscribed diamond ring, leading her to a CYGH contractor in a RBCST that intensifies her LOC.


So now that I'm clearly an expert in the Hallmark Cinematic Universe, I simultaneously understand the appeal and don't understand it at all. I call this conundrum Schrödinger's reindeer.

They're uniform in ways I find just a bit unsettling. They're all set in picturesque American towns populated by actors trying to conceal their Canadian accents. They're all photographed in tight, shallow-focus shots and on generic sets with minimal background extras. There's always a scene set at a Christmas tree lot. There's always a character reliving some kind of trauma tied to the holidays, as well as an advice-dispensing friend or sibling who works in a cute little bakery/coffee shop. Without fail, the movies end with a closed-mouth kiss and/or a job promotion.

There are also wreaths. So, so many wreaths, on every available surface.

These movies are so algorithmic and conventional that the scripts must look like Ikea furniture manuals, and although they appear to be credited to actual people with actual names, I wouldn't be surprised if they're all aliases for some kind of filmmaking A.I. that follows recipes with predetermined ingredients.

And yet I totally get how these could have become comfort blankets, something you can put on in the background while you do literally anything else and still be able to follow the plots. They exist in a bizarro world where no one is politically divided, where everyone lives in a catalog-ready home, and where everyone's personal problems are eventually tied up in a neat little bow in the final minutes.

As a died-in-the-wool cynic, I had a hell of a good time drinking whiskey and razzing them Mystery Science Theater-style. Whether or not that's how they were intended to be seen, that may become my new Christmas tradition. ♦

The original print version of this article was headlined "Christmas Cheese"