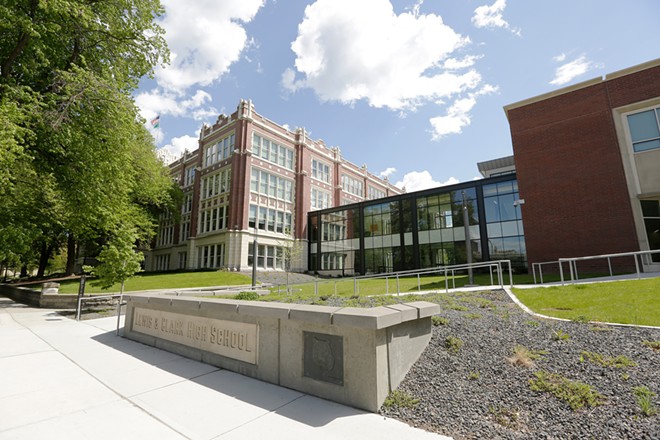 It's the first lunch period at Lewis and Clark High School, and a riotous mob of more than 75 students is thundering through the hallways. A few appear to be chasing after a specific student; many are just along for the ride or recording videos on their phones. It's May 5, shortly after 11 am.

Someone from the school calls the police and tells them students are coming into the office and threatening staff. She sounds worried. You can hear the chaos in the background of the 911 recording. The caller appears to tell someone in the school office to let the district's downtown offices know that 911 has been called.

A brief pause, and then the caller says, "Yeah, when a mob of kids come in this office and start threatening us, I'm absolutely calling the police."

Ten minutes later, police receive a call from someone else saying that things have stabilized and police are no longer needed. A campus security officer calls a few moments later and says police actually are needed. Cops arrive, and the situation eventually calms down. Two female students are charged with criminal mischief riot and harassment/threat to harm.

At a school board meeting a week later, Matt Tully-Ruppert, a Lewis and Clark math teacher, gives an impassioned statement criticizing the school board for their lack of action in the face of repeated safety concerns over the past school year. He accuses administrators of ignoring complaints to make the district's data look better.

"We've been begging at our school easily since October for things to change," Tully-Ruppert says, directly addressing superintendent Adam Swinyard. "Because it just seems like... are we just waiting for disaster? Is that the point?"

The incident at Lewis and Clark comes on the heels of a contentious back-and-forth between Spokane Police Chief Craig Meidl and Spokane Public Schools that reignited a broader debate over student safety and the role of law enforcement in the schools. The whole thing was triggered by a letter Meidl sent in March that accused the district of discouraging staff from reporting violence and other safety issues to police — violating their legal obligation as mandatory reporters. The district denied this. The FBI launched an inquiry shortly after.

Both Spokane police and Spokane Public Schools tell the Inlander that they're avoiding commenting on the issue until the FBI inquiry has concluded. The FBI didn't respond to questions but has previously indicated that it does not confirm or deny the existence of ongoing investigations.

One Lewis and Clark teacher, who asked not to be named because they are concerned about retribution, told the Inlander they were recently interviewed by the FBI as part of the inquiry into the matter. The teacher says there's been a noticeable increase in safety issues over the past year, especially when it comes to kids using hard drugs — not just weed and vaporizers — in bathrooms.

City Councilman Michael Cathcart says concerns about school safety first came to his attention around November. He says both school personnel and police officers have come to his office to share their concerns about the way the district was interacting with law enforcement. Cathcart says he feels like the schools are doing everything in their power to keep information away from parents. He says he thinks the district is motivated by a "clear bias" against police.

Cathcart traces the issue back to the decision to remove campus resource officers from the schools two years ago. The resource officers were not technically police but did have a commission with the police department and authority to arrest students and conduct investigations.

The presence of those quasi-cops in schools was controversial, especially after a 2019 incident when a resource officer at Ferris High School — whose history of excessive force allegations as a Spokane County sheriff's deputy was later reported by the Inlander — pinned a Black student by his neck, causing the student to reportedly say "I can't breathe."

Advocates like Julie Ancona-Shepard argue that resource officers reinforced an atmosphere of surveillance and discipline that disproportionally affected students of color and students with disabilities. Ancona-Shepard has served on various Spokane school district committees and task forces and was heavily involved in efforts to implement new safety policies.

In 2020, the school district replaced resource officers with campus safety specialists, who lacked police commission and the authority to arrest students. The move was part of a larger push by the Spokane Public Schools toward equity and restorative justice. The school district also updated its policies to focus on nonpunitive restorative practices, mental health support and evidence-based behavioral interventions.

The main goal of the policy shift was to lower the number of kids who were being expelled or prosecuted for misdemeanor offenses in school. That type of punishment can impact a student's ability to graduate and directly contributes to the school-to-prison pipeline, Ancona-Shepard says.

"We don't want to exclude [students] from society when they have a behavior issue. We want to help kids come back into the community."

The new safety policy was celebrated by many in progressive circles, but some in the law enforcement community warned that it could make schools less safe.

Ancona-Shepard pushes back on the idea that the removal of resource officers led to recent safety issues. The pandemic had a devastating impact on the mental health of children, she says. There's ample evidence to suggest that an uptick in violent and aggressive behavior in students is occurring at a national level — even in districts that didn't get rid of their resource officers. In a March survey by the American Psychological Association, one-third of teachers reported experiencing at least one instance of verbal and/or threatening violence from students during the pandemic.

Ancona-Shepard also wonders where Meidl is getting the idea that teachers are being told not to report violent incidents. As a Spokane substitute teacher, she was required to do mandatory reporting training. If a violent incident occurred in her classroom, she says she would absolutely feel comfortable reporting it to law enforcement.

"I'm very supportive of restorative practices and working on all levels without getting agencies involved with families," Ancona-Shepard says, "but I'm always going to step in for a kid and put them first."

While police are occasionally needed, Ancona-Shepard says, minor misbehavior — like vandalizing a bathroom because of a TikTok challenge — is best handled by the school.

City Councilman Zack Zappone, who works part-time as a teacher at North Central High School, has also seen a rise in behavioral issues and pandemic-related trauma in students this year. He says he was surprised by the fight at Lewis and Clark but still thinks restorative justice is a good policy direction for the district.

"We don't want to exclude [students] from society when they have a behavior issue," Zappone says. "We want to help kids come back into the community."

Zappone also notes that staffing shortages have made it especially difficult for teachers to deal with student misbehavior. At North Central, a mental health therapist position has gone unfilled since the start of the school year.

Shortly after the mob incident, Lewis and Clark told parents the school would spend two weeks "reteaching expectations to students," with a specific focus on hallway behavior, loitering in bathrooms and respectful interactions with adults.

One student, interviewed anonymously by KREM 2, told the news station that she only joined the crowd because she saw people running down the hallway. Her first thought was that someone was shooting up the school. ♦

The original print version of this article was headlined "Schoolyard Brawl"