Striking Triumph machinists decry Mexican outsourcing; plus, is Spokane up for another round of daiquiris? 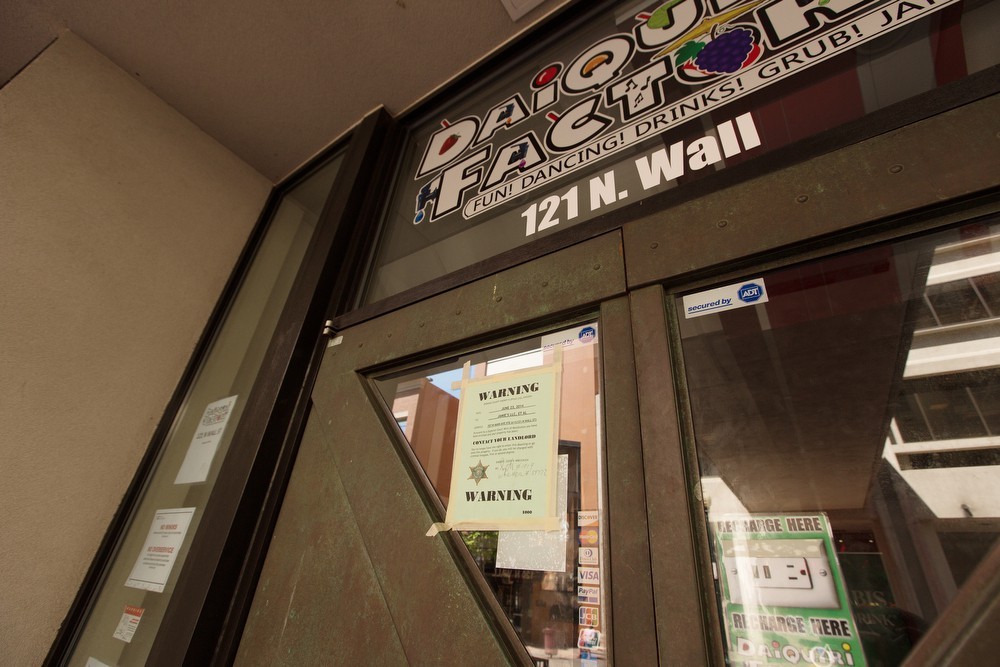 Will the shuttered Daiquiri Factory come back to life?

THE WILL OF TRIUMPH

Weeks after the 400 union workers at Triumph Composites Systems' factory overwhelmingly rejected a final contract offer from management on May 9, the STRIKE continues at the Airway Heights aerospace-parts manufacturer.

The strike has focused not only on rolling back pension concessions and eliminating a two-tier salary structure, but also on complaints that the manufacturer has been outsourcing jobs to Mexico, despite receiving tax breaks for the aerospace industry in Washington.

"We don't think it's fair for Triumph to expect the Spokane community to support their corporation with tax dollars, only to have it take some residents' jobs away while cutting overall pay and benefits for those who are still working," Machinists Union District Lodge 751 President Jon Holden said in a press release in May.

Strikers marched Saturday night carrying signs with slogans like "Tax subsidies for Triumph = Jobs for Mexico" and "Mexico is thanking Triumph for the Jobs."

While Triumph constructs a number of parts for Boeing airplanes, including floor panels for the 737, 767 and 777, the Seattle Times reports that the airplane manufacturing giant would not be adversely affected by the strike, despite the tight timetables that Boeing suppliers often must meet.

In a statement issued after the strike began, Triumph spokeswoman Lynne Warne promised that outside contractors would be brought in to replace striking employees, so that "operations will continue for the duration of any work stoppage without any expected disruption."

She stipulated that "we are disappointed by this decision, which is not in the best interest of the employees, the company or the community." (DANIEL WALTERS)

The corporation that hopes to run the bar, Pendleton Enterprises LLC, has applied for a liquor license with the state Liquor and Cannabis Board and applied to operate a sidewalk cafe with the city, which would allow the bar to serve alcohol on the patio.

Spokane police have asked the Liquor and Cannabis Board to reject the application based on the number of calls for service during the brief period that the bar was open in 2014, a move that former owner Jamie Pendleton says is unfairly targeting him for his "legal history."

Additionally, local comedian Nick Cavasier has started an online petition to bar the Daiquiri Factory from reopening. The petition currently has 251 signatures.

After opening in January 2014, the Spokane Downtown Daiquiri Factory drew scorn for its cocktail named "Date Grape Kool-Aid." Pendleton also lost a legal battle against Gonzaga University, which sued to keep the bar from using its trademarked bulldog mascot in promotions. With Pendleton at the helm, the bar was evicted in June 2014 from its location at 121 N. Wall St. Pendleton, who challenged the eviction, says he anticipates that the bar will reopen within a week. Most recently, Pendleton pleaded guilty to charging nearly $1,000 to an Idaho man's stolen debit card, a felony. Rather than facing jail time, Pendleton will serve 300 hours of community service and two years of probation.

His name does not appear as an owner of Pendleton Enterprises LLC, nor on the liquor license application. Instead, three other people, including his mother, Jacqueline Pendleton, are listed as governing members of the corporation. (MITCH RYALS)